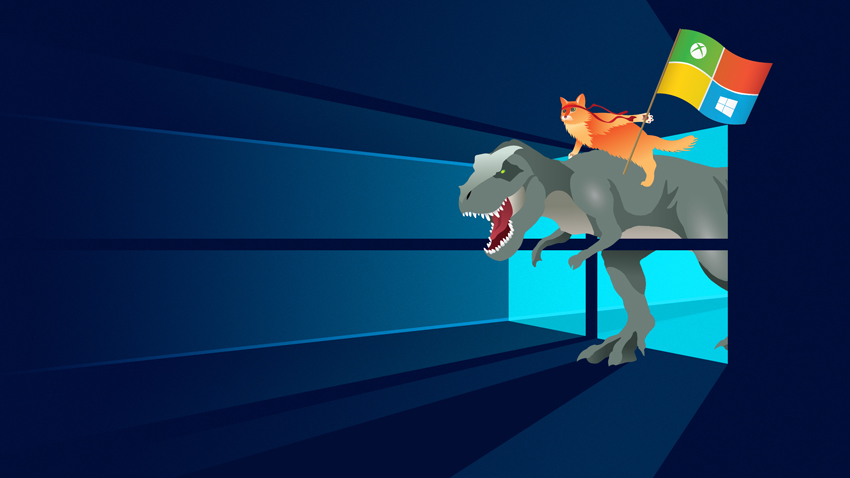 Well, we’re down to the wire. As I write this, there are only five days to go until the July 29 launch date for Windows 10, a milestone that’s about as soft was the nonexistent RTM release for this OS since many people waiting on the upgrade won’t even get it until days—maybe weeks—later. But Windows 10 is a big deal, and an overwhelmingly positive experience, especially when you compare it to Windows 8. So I’ll be dedicating much of my time in the weeks ahead to this new OS version, including releasing my in-progress e-book, Windows 10 Field Guide. So stay tuned. Lots of stuff happening. Speaking of which: The promo graphic you see above is my contribution to a fun little Windows 10 wallpaper mashup meme thing that Microsoft announced. You can download the full-sized (2560 x 1600) version from my OneDrive account if you want to get into the spirit.

Because you write for a tech blog?

The problem with Google is that everything it does will be seen through the lens of its creepy, privacy-invading efforts of the past. So when the search and advertising giant announced a new Google Maps feature called Your Timeline this week, some people loved it … and some really freaked out. Timeline lets you view the places you’ve been on a given day, month or year … on a map. It’s like the map I see of my walks with Microsoft Band, with one difference: Google automatically creates them—with Band, I explicitly enable this feature—and they’re sitting there in the Google Borg collective just waiting to be seen whether you ever intend to do so or not. Frankly, I think Your Timeline is a cool feature. But some see it as “terrifying” or “creepy.” Which, frankly, is how we should view all things Google. The good news? It’s private and only visible to you. And you can turn it off.

“How to Prepare Your PC for Windows 10.”

Amazon is worth more than Wal-Mart

Which, when you think about it, is one of those “good news, bad news” things. I don’t think anyone outside the Walton family would mind a company like Wal-Mart being knocked down a few pegs, but Amazon is its own form of cancerous retail growth, so it’s not a win-win. But with its recent quarter results—a pitiful little profit on huge revenues—sending its stock shooting skyward, Amazon’s market cap has finally surpassed that of Wal-Mart. But no worries, Wal-Mart fans: the retailer is still worth a stunning $230 billion or so.

And that’s the last we’ll ever hear from that company.

Pandora CEO Brian McAndrews said this week that the expected damage from Apple’s new streaming music service, the imaginatively named Apple Music, never materialized, with Pandora posting better than expected results for the most recent quarter. “With any big launch like [Apple Music] and the noise in the marketplace, there could be some users that experiment with it and there could be some short term impact,” he told Business Insider. “But we don’t believe that there will be any long-term impact … we feel really good about our trajectory and competitive position.” Pandora now boasts about 80 million subscribers, though it’s not clear how many pay for the service. To be fair, I see Apple Music as more of a direct competitor to Spotify. The part of Apple Music that competes with Pandora is basically free.

Tesla releases a software/hardware upgrade … for a car

And it’s pretty amazing: For the low, low price of $10,000 any Tesla S owner can upgrade their vehicle with a new feature called Ludicrous Speed—with a tip of the hat to “Spaceballs”—which lets the car speed from 0 to 60 MPH in under 3 seconds (!). “There is of course one speed faster than ludicrous, but that is reserved for the next generation Roadster in 4 years: maximum plaid,” Tesla’s Elon Musk said, in what is also a reference to Spaceballs. I love it when people have the same kind of humor I do, but this upgrade is overpriced: Even without Ludicrous Speed, a Tesla S can hit 60 MPH in just 3.1 seconds. And I’d still prefer a BMW, sorry.

Funny, I thought the Fiat 500 was a remote control car already.