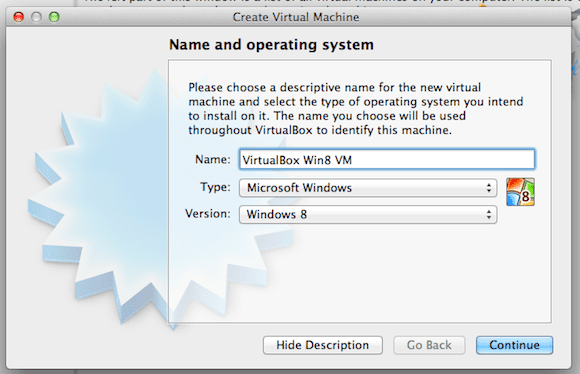 If you’re looking to quickly create a virtual machine with a different OS than your existing PC or server, you’ll likely turn to products like Parallels Workstation, Parallels Desktop (Mac), VMware Workstation, or VMware Fusion (for the Mac). All of these products do an excellent job of running VMs and quickly spooling up work environments of all sorts of operating systems, but with both personal and IT budgets tighter than ever, isn’t there a cheaper solution? Let’s take a look.

One of the best alternatives to all of the products I just mentioned is Oracle VM VirtualBox, an open source and free (at least for personal and home use) virtualization product that allows you to create and manage VMs. Companies and other institutions looking for a licensed version of Oracle VM VirtualBox with technical support can opt for a paid version. (See more details in this Oracle VM VirtualBox commercial license blog post.)

Installation is a straightforward process. I downloaded and installed VirtualBox 4.2.4 in both Mac OS X and Windows versions, and getting up and running with both versions only took a few minutes. I installed the OS X versions on a MacBook Air with a 2GHz Intel Core i7 processor, 8GB of 1600 MHz DDR3 RAM, a 256GB SSD drive, and Intel HD4000 integrated graphics. The PC version was installed on an HP Phoenix HP9E with 12GB RAM, a 3.5GHz Intel Core i& processor, 2TB hard drive, and an nVidia GeForce GTX 550 Ti discrete graphics card with 1GB video RAM.

The creation of virtual machines is facilitated by a step-by-step configuration process where VirtualBox prompts you for all the important details of your new VM, such as its name, type of OS, amount of RAM you’d like to allocate, which storage you’d like to us for the VM, how virtual CPUs and cores you’d like to use, etc. Technically savvy users will blow through this section in minutes, while less technically inclined users may opt for the more polished tutorials offered in VMware Workstation or Parallels Desktop.

Creating a VM using the OS X version of VirtualBox

VirtualBox does have some annoying limitations, such as lack of USB 2.0 support. That said, it does provide a host of more advanced features, such as VM backup and snapshotting options that are usable and effective, but generally lack the depth of features found in commercial products.

I tested both the OS X and Windows versions of Oracle VM VirtualBox by creating and running a variety of VMs, including testing with Windows 8 and Ubuntu Linux 12.10. In all cases the creation of VMs was painless process, and I was up and running with VMs in no time. VirtualBox on the PC was noticeably faster, but that can easily be attributed to the extra RAM, faster Intel processor speed, and more robust hardware of my  desktop PC.

I’ve used (and tested) both VMware Fusion and Parallels Desktop on the Mac several times (see here and here), and Oracle VM VirtualBox comes close to the performance that these products offer in the Mac environment, at least when it comes to traditional desktop applications, light web browsing, text editing and the like. VirtualBox struggles to run more graphically intensive games and applications that require advanced 3D graphics support, so Mac users interested in those products should opt for Parallels or VMware’s solutions.

On the PC, VMware Workstation is clearly a superior product, but in many ways you get what you pay for: The performance differential between VMware Workstation and Virtualbox on the PC — again, when running office applications and light-duty computing tasks — wasn’t overly significant. Comparing VirtualBox to Workstation is akin to comparing a Hyundai Elantra to a Mercedes-Benz CLS 63 AMG: Both will get you where you need to go and carry four passengers in comfort, but one does so with a more robust feature set, more style, and greater performance. 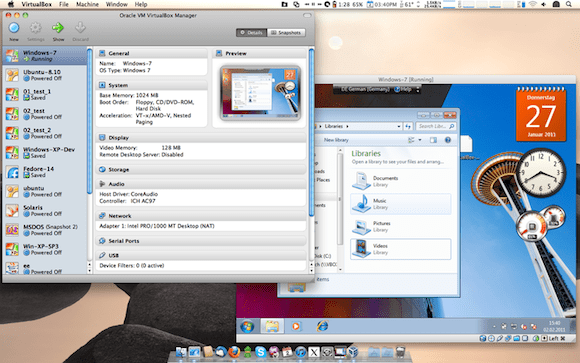 After spending a few weeks with VirtualBox, I came away mightily impressed. While it can’t match other commercial offerings on a feature-by-feature basis, it provides more than enough features for personal or home use. For admins who already have investments in other Oracle virtualization platforms and products, Oracle VM VirtualBox becomes a much more attractive options for business use as well. I’d encourage any sysadmin looking for a free, easy-to-use virtualization product to give this product a try.

Pro: An excellent value for personal and casual use, VirtualBox is loaded with an impressive number of features that help it give more expensive commercial offerings a run for the money.

Con: The lack of some hardware standards (like USB 3.0) is a curious oversight, and overall VM performance seems to lag behind other offerings. Program help and documentation is excellent, but lacks the additional detail and novice user hand-holding that other products provide.

Bottom Line: If you need to virtualize games or apps with demanding 3D requirements, choose Parallels Desktop. Have a substantial investment in other VMware virtualization products? Pick VMware Workstation or VMware Fusion. For most other use cases, Oracle VM VirtualBox is an excellent option for OS virtualization, especially for personal and home usage.