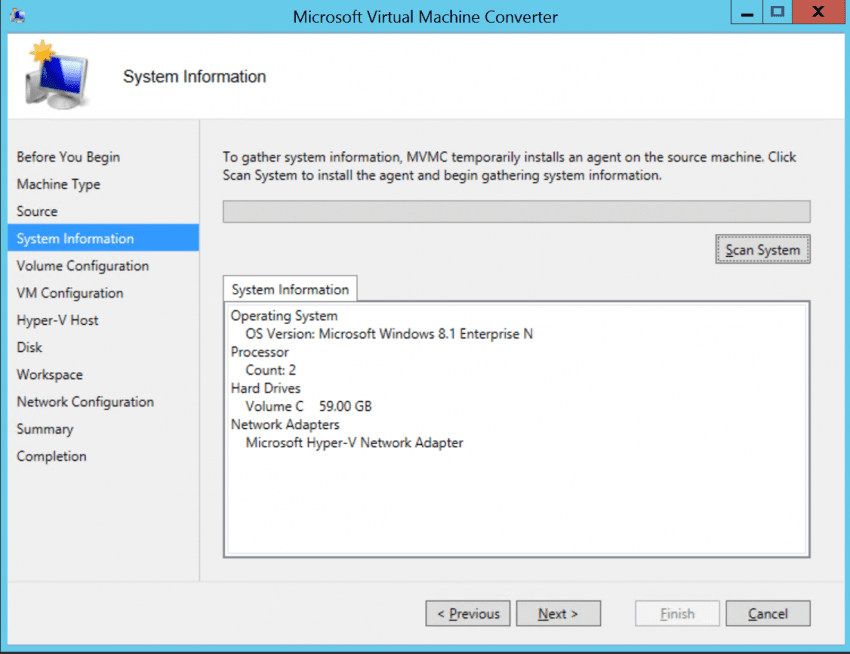 Microsoft has released Microsoft Virtual Machine Converter (MVMC) 3.0. This third version of this Microsoft virtualization converter tool fills a gap that has existed in Microsoft’s cloud and virtualization portfolio since the release of the 2012 R2 generation of Windows Server and System Center; Microsoft now has a tool for performing physical-to-virtual (P2V) conversions.

What is the Microsoft Virtual Machine Converter (MVMC)?

Microsoft released the second version of their free conversion tool, MVMC 2.0, in April of this year. At the time, I posted that this tool was supplanting System Center Virtual Machine Manager (SCVMM) as the conversion tool of choice. SCVMM had previously been the chosen method for converting physical and VMware machines into Hyper-V computers, but it was quite fiddly, and it didn’t deal with the complexity of replacing the VMware tools with the Hyper-V integration components. It’s also Microsoft-centric, as SCVMM didn’t convert Linux guest OS virtual machines. When SCVMM 2012 R2 was released, many were shocked to find that the P2V functionality, as flaky as it was, was removed. That left people seeking third-party alternatives or temporarily installing the previous release of SCVMM (SCVMM 2012 SP1) to convert any remaining physical machines into Hyper-V virtual machines.
In April, Microsoft announced their intentions with the release of MVMC 2.0. This free tool offered virtual-to-virtual (V2V) conversions from vSphere that handled the VMware tools and support was added for migrating Linux guest OSs and for migrating virtual machines to Azure. Microsoft also announced that they were planning to release MVMC 3.0 in the fall of 2014 and that this next version would add support for P2V conversions.

As promised, MVMC 3.0 was released by Microsoft in the fall of 2014. The highlight of the release is that it supports the conversion of online physical computers running either Windows Server and later 2008 or Windows Vista and later into Hyper-V virtual machines.

Here is a summary of the other features of this tool:

At this point I have been unable to discover if the Migration Automation Toolkit for MVMC (MAT4MVMC) has been or is planned to be upgraded to support this new version of MVMC. This package of scripts can be used to automate the conversion of machines, and this has proven to be valuable when dealing with a large scale conversion project. For example, orchestrated jobs can be constructed and published by System Center Service Manager to enable cloud tenants to request an automated conversion of their virtual machine from vSphere to Hyper-V.

The supported configurations for MVMC 3.0 are as follows:

This information is paraphrased from the document that is included in the MVMC download. Note that the early release of this document has numerous errors so the above information is subject to change.