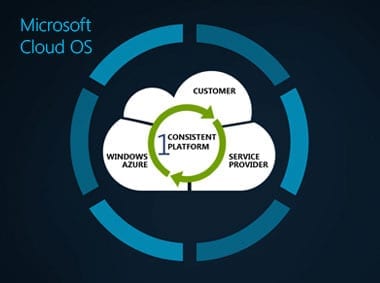 In this article, we are going to introduce you to the concept of cloud computing (including public, private, and hybrid clouds). We’ll also discuss how Microsoft has engineered a cloud OS with Windows Server 2012 and System Center 2012 with Service Pack 1.

What Is a Cloud?

Microsoft made a big deal about taking us “beyond virtualization” with the release of Windows Server 2012. What that meant was they were bringing us to an era of cloud computing with a designed-for-purpose solution. Cloud computing isn’t just a marketing term, although many marketers misuse it.
Cloud computing has been driven by a change of attitude towards computing services. Traditionally, IT is a black box in the business, providing centrally or distributed services that are designed, engineered, and maintained by IT. The business sees IT as slow, inflexible, and unresponsive to threats and opportunities. Meanwhile, IT staff feel overwhelmed. Cloud computing requires one essential change in perspective. Those who are familiar with ITIL (Information Technology Infrastructure Library) or MOF (Microsoft Open Framework, a Microsoft focused version of ITIL) understand that IT provides services to customers. That is exactly what cloud computing does, but those customers can be internal or external, and (cross-) charging for those services is optional.

The American National Institution of Standards and Technology (NIST) wrote a definition of cloud computing that is widely accepted. There are several essential characteristics in a cloud:

There are three service models of cloud computing. Each of these models must have the characteristics of a cloud:

There is a misconception that cloud computing means outsourcing. Certainly, there are some organizations whose existence depends on you believing that. Conversely, there are those who work in IT infrastructure that panic when they hear that their bosses are meeting with someone to talk about “the cloud.” In reality, there are four deployment models of a cloud. A service model can be deployed as any one of these deployment models.

Once you understand what a cloud is, take a look at your virtualization (KVM, ESXi, Hyper-V, XenServer, etc.) and ask yourself, “Do I really have a cloud?” Virtualization is not a cloud – it is an enabler of the cloud. For example, templates can be deployed from a library. This enables rapid deployment, self service, and potentially makes elasticity a realistic possibility under the right circumstances.

The term “cloud computing” is relatively new. The cloud didn’t start with Amazon or Salesforce. If you look at the traits and models of a cloud, you’ll quickly see that Microsoft (and many other companies too) has been in the cloud business for a long time without knowing it. Hotmail (now Outlook.com), Bing, MSN Messenger (now Skype), and hundreds of other services are public clouds (mainly of the SaaS variety). In recent years, Microsoft has deployed huge data centers around the world (operated by Microsoft Global Foundation Services) that host services such as Azure and Office 365. Deploying, managing, and owning these data centers has given Microsoft a huge opportunity to learn and innovate in ways that would have been otherwise impossible.
Microsoft could have kept those new infrastructural components to themselves, but instead, they have decided to release them as a part of their cloud OS. This means that Microsoft customers can deploy private and hybrid clouds with similar functionality to Azure Infrastructure Services. Microsoft partners are not left out: they too can offer hosted private, public and hybrid clouds to their customers that are on a par with Azure Infrastructure Services.

What Is the Cloud OS?

Microsoft’s Cloud OS allows you to build IaaS public, private, and hybrid clouds that have all of the generally accepted characteristics of a cloud. There are two components to the Cloud OS, which I’ll go into further in a moment.

The list of new features and enhancements in Windows Server 2012 Hyper-V (let alone the rest of the OS) is staggering. A number of the features were designed for building the compute resources of a cloud, and some even started life in Windows Azure.

These are just some of the features of Windows Server 2012 that take Hyper-V beyond virtualization. There are many more ingredients:  WS2012 brings a lot to the table on its own, but the cloud OS really comes to life when some of these features are lit up by System Center 2012 SP1. 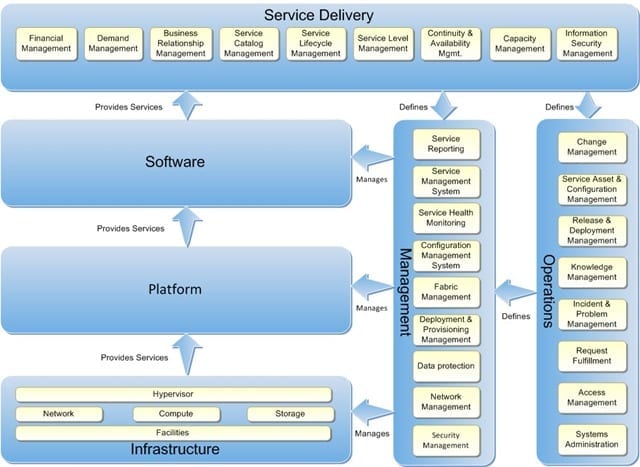 Prior to the release of System Center 2012, there were numerous independent System Products that had some level of integration. Then came System Center 2012, a suite (that some consider as a single product) that is made up of a deeply integrated set of components. Used separately, each tool brings a lot to the Cloud OS. When used together, System Center 2012 SP1 can revolutionize who a business consumes (or provides) cloud computing.

There’s more to the Cloud OS!

Microsoft did not rest after the release of WS2012 and System Center 2012 SP1. Microsoft is not just offering a private cloud. A public cloud is offered in the form of Windows Azure. You can deploy your services on Azure Infrastructure-as-a-Service, and move your virtual machines (offline) to and from the public cloud. Hosting companies need not fear, as Windows Azure Services for Windows Server gives independent public cloud service providers the ability to deploy services based on Hyper-V and System Center using a portal that is almost identical to the one found on Azure. This new modular and customizable portal has proven so interesting that customers are even considering it as a competitor to the open source alternatives for private cloud (instead of App Controller), giving them all of the characteristics of a cloud in a tidy and scalable package.

Uniqueness of the Cloud OS

While there are companies that create a cloud designed from traditional virtualization-centric server (not service) management, and there are communities that build a cloud without deep integration into the virtualization, Microsoft has designed and built a complete cloud OS from the foundation of the infrastructure right through to the portal that the tenant is deploying their services through. Microsoft’s experience in managing public clouds in some of the largest data centers in the world gives them a unique perspective, and their history in delivering service-centric systems management has made their platform a natural choice for cloud computing. And true to form for the 2012 generation of products, you have options – there is no one right way to design and deploy a cloud.