Managing Windows Server Containers with PowerShell: Connecting to a Network 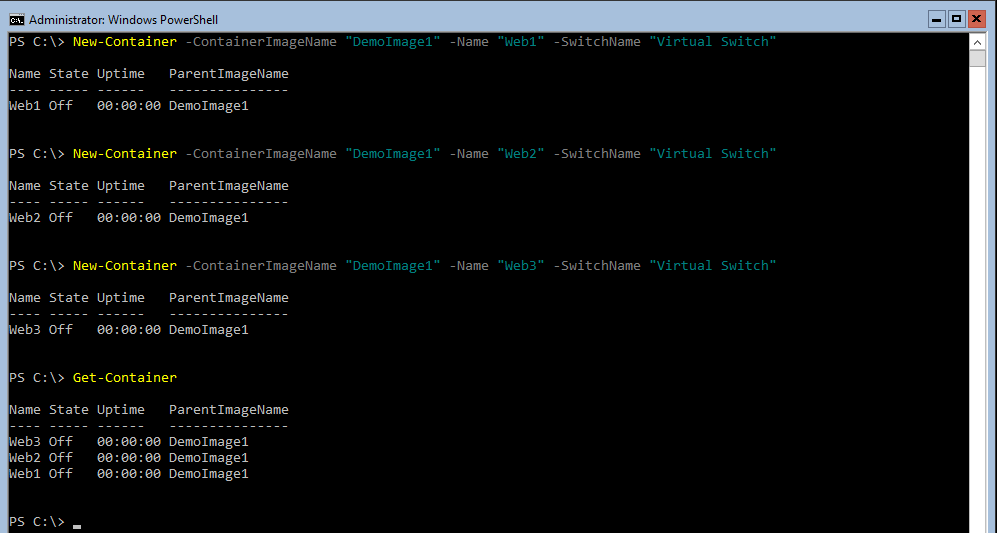 In this article series, I’m showing how you can manage Windows Server Containers on Windows Server 2016 (WS2016) Technical Preview 3 (TPv3) using PowerShell. I’ve already covered where the files are stored, what kinds of files are used, how to create and start a new container, the methods for interacting with a container, and how to create a new container image. In this post, we’ll cover how you can deploy a new service on the network using containers.

This cmdlet will create a new container that is identical to the one that was used to create the container image.

The repository linking system creates the new container in about a second, and we can repeat the command with a new container name to instantly create clones of the container. In other words, we could deploy a large application or web farm of hundreds of instances in seconds, especially if you use a loop. The following will create containers Web4 to Web10 in just a few seconds:

I bet you’re thinking that PowerShell and born-in-the-cloud applications are looking pretty impressive right about now.
You can use Start-Container to launch a container:

Or you could start them all at the same time:

Make sure that the service installed in the container has started. Microsoft’s example of nginx requires you to start the nginx service up.

Connecting Containers to the Network

If you decided to use DHCP networking, then your virtual machines should get a DHCP-assigned address if the virtual and physical network and DHCP server are correctly configured for the broadcast domain.
However, if you went with DHCP addressing, then each of your containers will get a private IP address from the NAT virtual switch. This makes things a little more complicated to set up, but it is more scalable. We can set up a large farm of containerized web servers using a single IP address on the LAN by using NAT. Each container has a web server listening on port 80. We will configure NAT rules on the VM host to intercept traffic on some unused TCP port and forward it to TCP 80 in the container. For example:

The format of a rule works something like this:

We need the private IP address of the Web1 container:

Now the service is up and running in the container. Below I have browsed to the IP address of the VM host with the TCP port of the Web1 container:

The container is now a ready web server on the LAN (Image credit: Aidan Finn)

All you have to do now is script the configuration of NAT rules for the remaining container, configure a network load balancing appliance, and your scaled out web farm is up and running in less time than it would take to deploy one virtual machine web server.