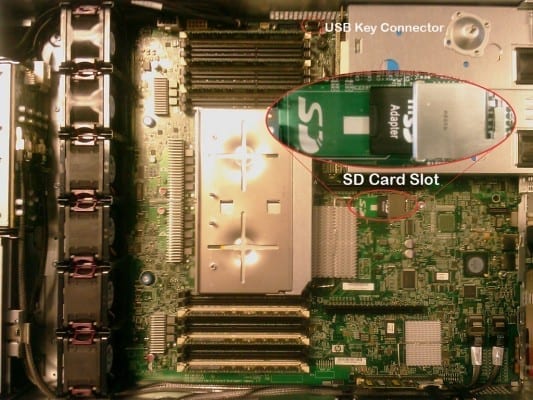 Starting with ESX 3.0 VMware began issuing an alternative ESXi version, the main difference being that the Linux Service Console was removed (although in fact it was not completely removed – see my blog here to see how you can still access it). This greatly reduced the overall size of the installation from around 2GB down to only 300MB, with the additional benefits of dramatically cutting boot times  and improving security.

Another advantage was that it could also now be installed on a USB storage device and as a result several server manufacturers started to include an internal USB slot for this purpose. On their new G6 range of servers Hewlett-Packard have extended this to give owners a choice of USB or SD Card media slots integrated onto the motherboard:

First of all you need to prepare your server, and as usual I recommend ensuring the BIOS and hardware firmwares are all up to date – HP provide a downloadable firmware CD ISO which is regularly updated, although you should also check the specific support page for your server model for interim updates. Dell operate an even simpler system whereby you can just enter the “Service Tag” for your server in order to see the available updates, and most major manufacturers do something similar. Nowadays BIOS and firmware updates are easy to install as most are supplied on bootable media with graphical installation wizards, so it shouldn’t take you long to do.

The HP G6 servers give us a choice between a USB flash drive and SD Card for our installation media, so in this example I have opted for an SD Card. In fact the one in the illustration is a MicroSD Card in an adaptor since that was all I had available at the time, but I wouldn’t recommend that for a production system. Since this will likely be a critical piece of hardware you shouldn’t economize on the components, subsequently I have replaced the card with a 2GB Kingston High Performance model. We opted for SD Card instead of USB in the belief that performance and reliability were slightly better, although I am yet to find much real world evidence to support this. Your USB or SD Card media needs to have a capacity of at least 1GB to hold the ESXi install, there is no benefit in using a larger card as the remaining space will go unused.

Installing the SD Card is simply a case of sliding it into its slot, ensuring the write protect switch hasn’t been turned on by accident in the process! Once it is inserted re-assemble your server and boot it up into the BIOS setup screen in order to check it is enabled to boot from internal SD/USB media. During normal operating conditions it should be the only bootable device present in the server, so if you do not have any hard disks installed you may wish to disable the embedded RAID controller (VMware recommend disabling/removing unused hardware to free resources).

When you are ready boot the server off the ESXi 4.0 ISO, then when prompted press “Enter” to start the installation process, read the EULA and press F11 to accept it. The next screen prompts you to choose your installation disk and you should see your USB/SD media listed as an option – if there are no other hard drives in the server it should be the only option. In this example below my server has a 1GB SD Card installed as well as several hard disks configured in two logical disks: 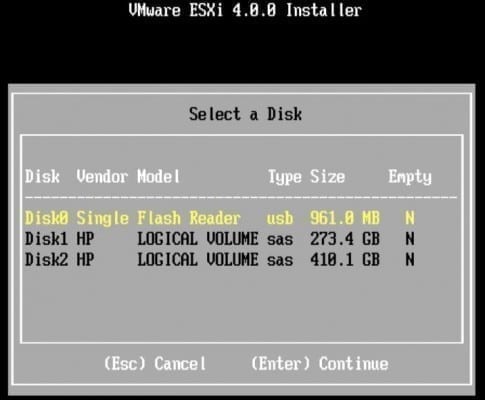 Make sure your disk is highlighted and press “Enter”, then on the next screen press F11 to confirm and it will start the installation process. Once it has completed installing you will be prompted to remove the installation CD and reboot the server, after which it should then boot ESXi for the first time from the embedded media. Should it fail to boot the most likely cause is that the boot options are not correctly configured in the BIOS, in which case check them again and ensure booting from internal USB/SD media is enabled.

Provided your server does boot into ESXi after you have removed the installation CD then the rest of the setup procedure is the same as with any other method, and you should not need to treat it any differently. The only major difference will come when configuring datastores for the host to use, assuming there are no local disks to use then you will have to setup a connection to your SAN first, then connect the datastores from there.

Although this is by far the easiest way to install ESXi on USB/SD media there may be an occasion where it is not an option, or you wish to prepare a bootable ESXi USB drive in advance on a different system. The main reason for doing this is to “hack” ESXi’s hardware support in order to get it working on unsupported hardware, most commonly systems with SATA hard disks. My main article on installing ESXi 4.0 mentions the “Whitebox hardware compatibility list“, which lists a number of storage controllers which ESXi will work on “with some modifications”. Should you want (or need) to do this then I suggest you start here, which explains how to create your own bootable ESXi USB stick and then goes on to provide links to various useful websites.