As you accumulate virtual machines, then sooner or later you are probably going to run into a situation in which you want to move one or more virtual machines to a new host server. Microsoft makes this possible through the Hyper-V Manager’s Import and Export functions.

If you look at Figure A, you can see that  when you select a virtual machine, Hyper-V displays an Export link in the lower right corner of the console. There is also an Import Virtual Machine link at near the top of the Actions pane. 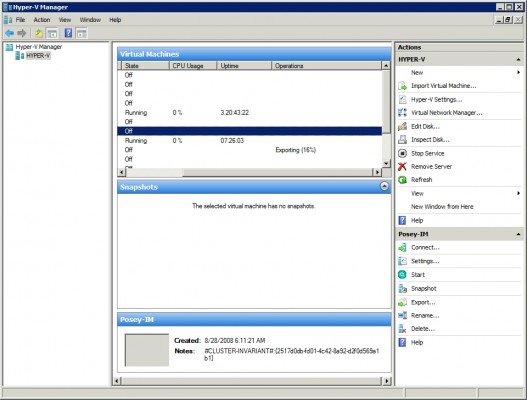 The Import and Export functions are accessible through the Hyper-V Manager.

On the surface, it appears that you can simply select a virtual machine, export it, take the exported image to another server that’s running Hyper-V, and import it. On some levels this really is the way that the import and export processes work. There are some gotchas that you need to be aware of though, and the only way that you can avoid those gotchas is to understand what’s really going on when you export and import a virtual machine.

The process of exporting a virtual machine is really simple.

So what’s so tricky about the export process? Well, not a lot really, but there are still some things that you need to know about it. For starters, Windows will place the virtual machine within a sub folder that bears the virtual machine’s name within the path that you have specified. For example, I decided to export a virtual machine named R2. Not wanting to lose the files among other clutter, I created a folder named C:\R2 and specified that as the export path. What I ended up with was the exported files residing in a folder named C:\R2\R2\.

One of the big questions that I had about the export process before I began was whether or not it left the original virtual machine instance intact, and in its original location. I’m happy to report that the files making up the virtual machine are untouched during the export process. This does however, mean that you will have to manually remove those files once you have moved the virtual server to its new location.

The other thing that you need to know is that depending on the size of the virtual machine, the export process can take a really long time to complete. Unfortunately, I can’t tell you exactly how long, because the amount of time depends on the size of the .VHD files that are being used, and on your machine’s hardware capabilities.

As you can see, exporting a virtual machine is really simple. Now let’s take a look at the anatomy of the exported information, and how the import process works.

The Anatomy of a Virtual Machine 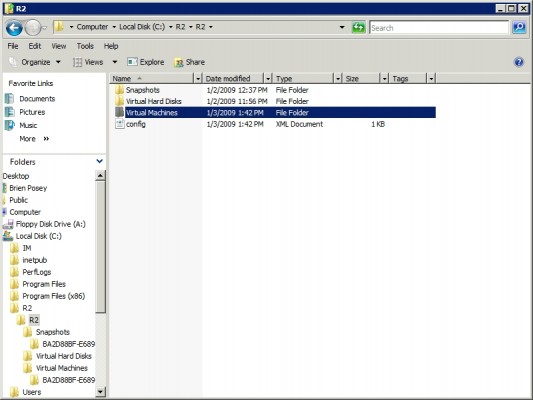 Hyper-V creates a folder in the destination path that bears the name of the virtual server that you are exporting.

If you look at the figure, you will notice that within the folder that Hyper-V creates are three sub folders. There is also an XML file named Config.xml.

As the name implies, the Virtual Hard Disks folder stores the .VHD files (virtual hard drive files) used by the virtual machine. You can see an example of this in Figure D. 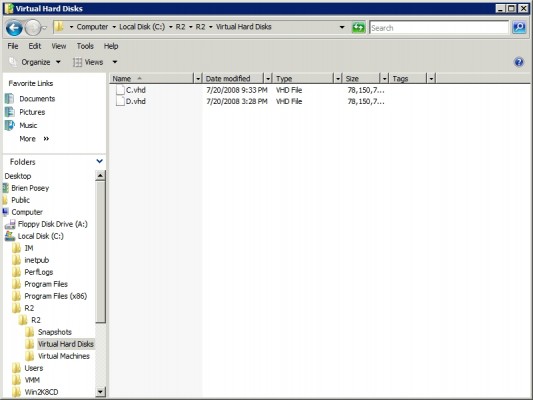 The Virtual Hard Disks folder contains the .VHD files for the virtual server.

The import and export process is used primarily as a means for moving virtual machines from one host server to another. Therefore, the first step in the import process is to copy the export folder and all of its sub folders to the desired host server.  After doing so, open the Hyper-V Manager and click the Import Virtual Machine link. You should now be prompted to enter the virtual machine’s path.

The process of importing and exporting virtual machines isn’t all that difficult, but by following these tips, hopefully you’ll save yourself from a few of the most common pitfalls related to duplicate virtual machines or the imported machine’s location.