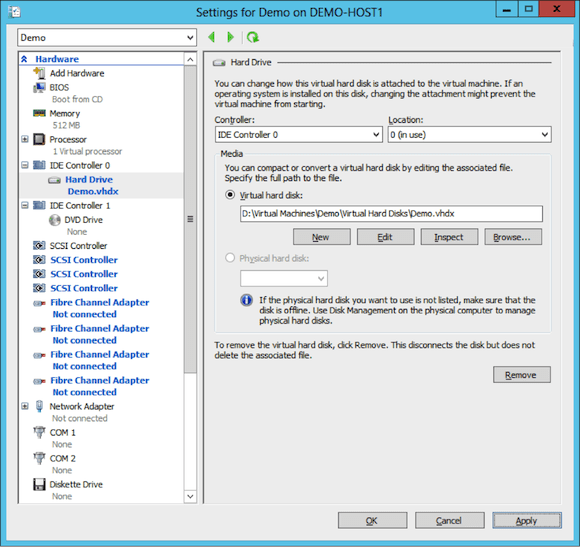 Over the past few weeks, we have discussed using physical disks for Hyper-V storage and virtual hard disks with virtual machines. In this post, we will look at what to consider when configuring a virtual machine’s storage.

Unlike IDE and SCSI, virtual fiber channel adapters can only connect to physical disks, which happen to be zone to the WWN’s of the virtual machine. This means that you lose the flexibility of virtual storage, but it does offer other benefits such as shared storage and disks that scale beyond 64 TB.

There are no dedicated virtual iSCSI adapters in Windows Server 2012 Hyper-V, which means a Hyper-V virtual machine cannot boot from an iSCSI disk. However, a virtual machine can use ordinary virtual network adapters that are bound to the VLANs of the SAN to connect to iSCSI disks. This offers the same benefits as Fiber Channel Adapters.

Windows Server 2012 does support using SMB 3.0 for storing application data, including SQL Server 2008 r2 (and later) and IIS 8.0. Maybe you don’t need to allocate storage to a virtual machine? Maybe you can configure the guest OS to use a shared folder on a Windows Server 2012 file server or Scale-Out File Server (for scalable and continuously available shares). This will simplify the storage of the virtual machine, but it does require more virtual network adapters to be used. Note that while you can have SMB Multichannel over multiple virtual network adapters, you won’t have SMB Direct (RDMA) functionality in the virtual machine.

Now we understand the various ways we can attach storage to a virtual machine, but how will we plan the attachment of that storage? Let’s take a look at some of the ways.
Virtual Hard Disks Vs. Physical Hard Disks: The primary reasons that businesses like virtualization is that it enables self service and creates flexibility. Physical disks prevent both of these benefits. Therefore you should assume that virtual hard disks are the default unless otherwise specified.

Each virtual machine gets one storage channel per SCSI controller and per 16 virtual processors. That means if you want more storage throughput:

You cannot use shared virtual hard disks in Windows Server 2012 Hyper-V. That means you must either use SMB 3.0 storage or physical disks on a SAN (or simulator) to create a guest cluster.

While we can hot add and remove disks to a SCSI controller in Windows Server 2012 Hyper-V, we cannot hot-resize a virtual hard disk. This is a concern for a very small audience. Most administrators will size their virtual machines in advance and size virtual hard disks accordingly. Those who are concerned with the cost of idle storage space will consider using Dynamically Expanding virtual hard disks for application partitions that are attached to a SCSI controller.
On the other hand, there are those who want complete control, clinging to server administration techniques of the past. They must opt for physical disks, such as a passthrough disk or SAN disk, or an SMB 3.0 share on a physical disk. A physical LUN can be resized as required using a storage administration tool without interference to the virtual machine.

VHDX will be the default format virtual hard disk, scaling out to 64 TB. In the very rare situation where a business requires volumes greater than 64 TB, you will need to use physical disks or SMB 3.0 file shares (that are stored on physical disks).
Note: Please don’t try to be clever by using Storage Spaces to aggregate 2040 GB VHD files to create a larger volume in a WS2012 virtual machine. Using Storage Spaces in the guest OS of a virtual machine is not supported.

There are several scenarios to consider:

One of the benefits of Hyper-V is that you can install an agent on hosts and backup (Windows) virtual machines with application consistency using the Hyper-V VSS Writer. This gives the same sort of result (backup lots of virtual machines with a single job) that a SAN snapshot might, but with greater orchestration and consistency. Note that most business-ready SANs offer a hardware VSS provider to integrate SAN snapshots with the Hyper-V host backup process (this might require additional licensing, depending on the OEM).
Use of physical disks requires that you install backup agents in a virtual machine’s guest OS to back up the physical volumes with application consistency.

This will eliminate bandwidth consumption by constantly changing paging files without compromising the replica VM. It will also complain during failover, but it will create a temporary paging file and get on with things.