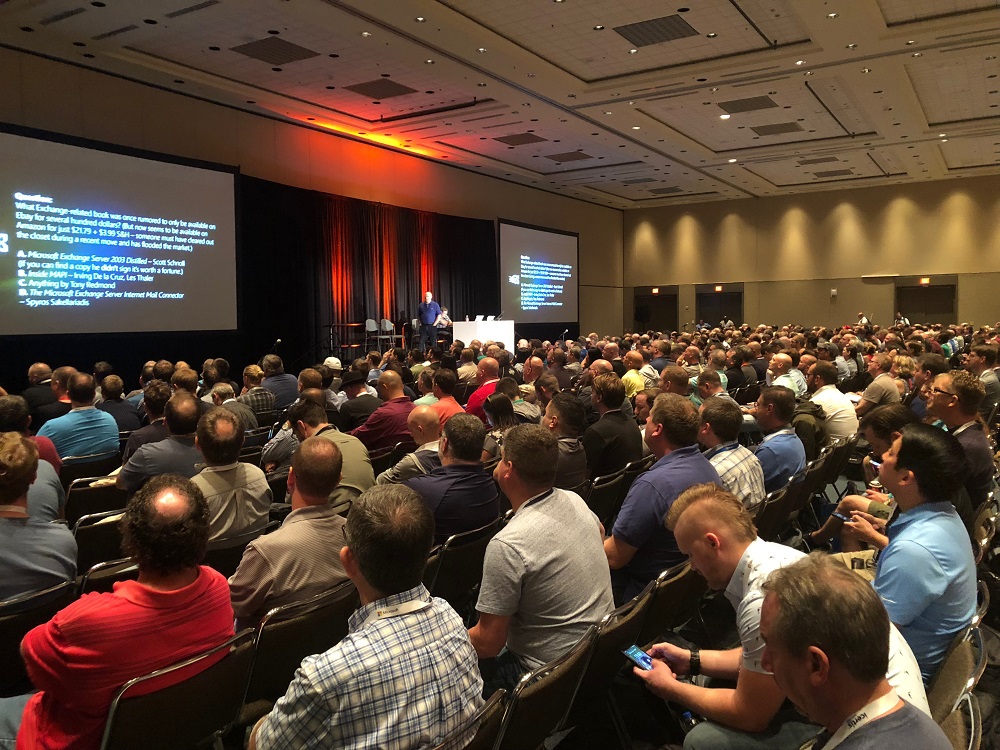 While much of the attention at the Microsoft Ignite conference focused on Microsoft 365, artificial intelligence, Azure, and the cloud, there’s still life in on-premises software, a fact underlined by the strong interest in Exchange 2019 when the developers took the wraps off the tenth version of Microsoft’s enterprise email server. Two thousand people signed up to attend a session introducing Exchange 2019. Not everyone got into the room because it was packed to overflowing, but the thirst for information was palpable.

Given that email was the first and easiest workload to move to Office 365, it might seem surprising to find that a new generation of Exchange is about to ship. But this is a different Exchange. Shorn of any pretension to be a collaboration platform, Exchange 2019 is an enterprise email server, pure and simple.

Microsoft has never released a public figure for the number of Exchange licenses it has sold. Some industry experts estimate that the number might be as high as 350 million. Microsoft says that Office 365 has 135 million monthly active users (maybe 150 million now), so the numbers say that there’s still lots of Exchange mailboxes happily running on-premises. I think most small to medium businesses have moved to Exchange Online, so the remainder are likely in large deployments.

Large enterprises are notoriously reluctant to embrace new technologies. And to be fair, some of the attractiveness of the cloud is undermined by the fact that large enterprises usually have the resources to run top-notch IT infrastructures. It’s also true that these companies sometimes need a degree of customization that can’t be achieved in large multi-tenant infrastructures like Office 365. Finally, the confidence to embrace the cloud can be hit when well-publicized outages occur, as happened when lightening hit a Microsoft datacenter in San Antonio, Texas, on September 4.

For all these reasons, Microsoft is releasing 2019 versions of Exchange, SharePoint, and Skype for Business. On-premises customers are kept happy and choice is preserved.

So what is Microsoft doing to make on-premises customers happy with Exchange 2019?

The first thing to know is that Exchange 2019 only runs on Windows Server 2019. Yes, it’s another operating system upgrade, but let’s face it, people upgrade Exchange servers with a lift-and-replace approach where the server is built from bare metal to match the needs of the server. It’s also the case that email servers tend to be in place for many years. For these reasons, it makes sense for Microsoft to require customers to deploy the latest version of Windows Server too. Especially as the Exchange and Windows teams worked together to tighten security for the product.

What might be more surprising is Microsoft’s recommendation to use Server Core as the basic platform for Exchange 2019. The logic is that Server Core offers better security by removing components that you really don’t need. Remember, most Exchange servers are managed remotely via EAC or PowerShell, so there’s no reason to have a bunch of Windows features installed on an Exchange server. You also free up CPU cycles for email processing, which is always a good thing.

The minimum memory recommendation for Exchange 2019 is 128 GB, up from a wildly unrealistic 8 GB previously. The maximum is 256 GB (or 64 Gb for edge servers). Memory is cheap, and Exchange 2019 puts as much of its data in memory as possible, so make sure that the servers you configure have the right amount. The maximum recommended processor count is 48 dual-socket.

The move to Server Core means that ISVs have some work to do to ensure that their products work with Windows 2019/Exchange 2019. For example, a product might depend on a feature that doesn’t exist in Server Core. If in doubt, ask your suppliers what their plans are to support Exchange 2019.

Exchange 2019 adopts the Big Funnel search model used by Exchange Online. What this means is that search indexes are now stored inside mailboxes and managed like any other mailbox content, including replication to database copies. There are no more search index files to manage!

Exchange 2003 was a fat I/O pig that demanded large and expensive Storage Area Networks to run at its best. For the last sixteen years, the Exchange engineers have been on a crusade to reduce the server’s I/O footprint. That work paid big benefits when Microsoft built Exchange Online because it made it economically possible for Microsoft to offer features like 100 GB mailbox, expanding archives, and inactive mailboxes.

Exchange Online (and Outlook.com) run on 16-node Database Availability Groups with four copies of each database, all using low-cost JBOD. Running at the scale of Exchange Online at the prices Microsoft charges for mailboxes wouldn’t be possible except for the work done to eliminate Exchange’s appetite for I/O.

Exchange 2019 delivers a further improvement in I/O demand through a mixture of tweaks (like reallocating memory previously reserved for passive copies) and new functionality. For the first time, Exchange integrates SSD technology into a tiered storage strategy with the “metacache database,” where up to 10% of mailbox data (indexes, mailbox folder table, and some small items) is copied to SSDs assigned to databases. No attachments are ever stored in the metacache.

With a metacache installed, the SSD satisfies most requests made to databases and avoids the need to go to JBOD. Users experience faster logons because mailboxes open faster. Searches are also faster if data can be retrieved from the metacache.

The Information Store is intelligent enough to detect and use the metacache database if it’s available or to revert to the normal database access if no cache is installed or it’s experiencing a problem. Expect more guidance from Microsoft to help you configure the size and ratio of SSDs for your databases as Exchange 2019 nears its formal release.

The Exchange developers hope that the combination of Windows 2019 Server Core and metacache will turbocharge Exchange databases and enable servers to host more mailboxes than ever before and drive down operational costs. Overall, they think that Exchange 2019 will support 20% more users on a server than Exchange 2016 can with a similar configuration.

Separate Routes in the Future

Microsoft confirmed that the Unified Messaging role is not supported by Exchange 2019. The obvious option is to move mailboxes to Office 365 in a hybrid or pure cloud deployment. But if you want to stay on-premises you can deploy Skype for Business Server or stay on Exchange 2016, which will be supported until 2026. Alternatively, look for a third-party solution.

Truthfully, apart from some improvements in calendaring (like blocking the forwarding of meetings), there’s nothing much in Exchange 2019 to excite end users. They might notice that searches run faster because the metacache speeds access to data, but if they’ll be disappointed if they look for the bells and whistles seen in Office 365.

Email for the Enterprise

Remember, Exchange 2019 is a standalone mail server built for large enterprises. It’s not surrounded by and integrated with all the other components that Exchange Online can call upon within Office 365.

But if you want an email server to deliver reliable and robust email for the enterprise, there’s nothing much else out there that can touch Exchange. The tenth release moves the bar up even further, even if all the benefits are in the infrastructure. Exchange 2019 documentation is now online for your reading pleasure.