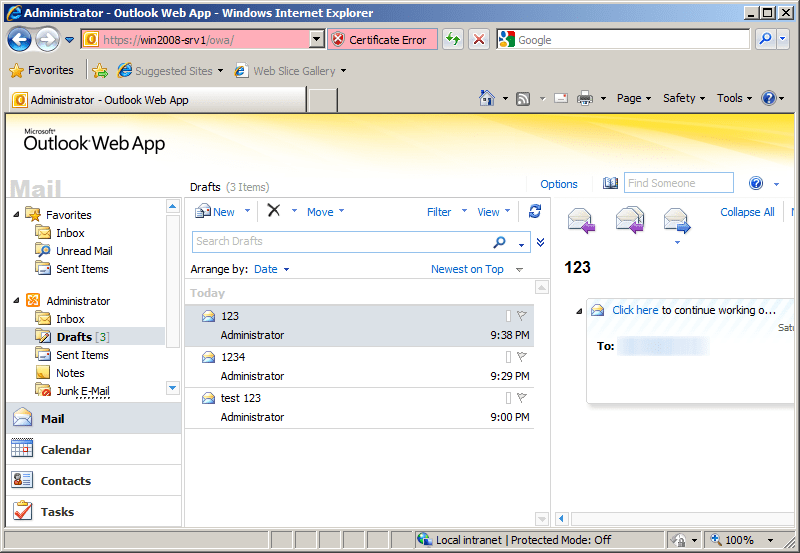 To prepare the images I installed 2 virtual machines, one with each operating system. I then updated each VM, installed some of the stuff I use in order to customize and prepare the machines for my personal preferences, and got ready to clone them.
As you probably know by now, and if you don’t, it’s about time, Microsoft-based operating systems use SIDs (Security IDs) that are generated as part of the initial setup of Windows. If you have more than one computer with the same SID, this could cause problems, and cloning a computer (either physical or virtual) without re-generating this SID can cause SID duplication. You can read my “Creating and Cloning Virtual Machine Images” article for more information.
Anyway, knowing this issue I was careful to run SYSPREP on both VMs before shutting them down and cloning the virtual hard disk files. However, as you’ll soon find out, it seems that I have neglected one little aspect of using SYSPREP on Windows Server 2008 R2.
However, at this moment I was not aware of any issues. I was under the impression that SYSPREP did what it was supposed to do – remove the machine’s SID and other settings, preparing it for cloning.
So, I cloned the VMs, and created this configuration:

All was set to go. I installed the right Exchange Server 2010 roles on WIN2008-SRV1 and WIN2008-SRV2, and started to customize the Accepted Domains, E-mail Policies, Send and Receive Connectors and so on.
I opened Outlook Web Access (OWA) or what they call now as “Outlook Web App”. All seemed to be working like a charm.
And then it hit me.
I created a simple e-mail message to myself.
The e-mail message got stuck in the Drafts folder.
I did it again, and now I had more messages  stuck in the Drafts folder. 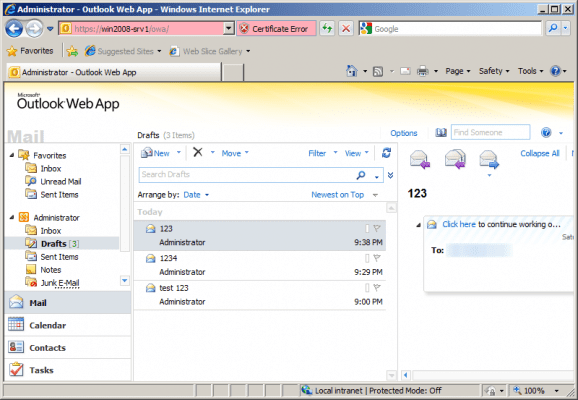 I rebooted the Mailbox role server. I rebooted the CAS/HUB/DC server.
I looked and searched for more information on the Internet. I remembered that in Exchange Server 2007, if you had less than 4GB free space in the partition that held the Exchange database and queue, this could happen. If that is true, one needs to make the disk larger, if possible, or move the Mailbox databases, Queue Database and Queue Log to another empty drive. But in my case, the virtual disks were considerably larger (80GB) and had plenty of free disk space.
I even found this:
An e-mail message is not sent as expected when you send the e-mail message from Outlook Web Access and the Microsoft Dynamics CRM 3.0 client for Outlook is open
http://support.microsoft.com/kb/946653
Not related to my case.
I continued to search on, and finally I got it.
Error: Not able send mail from OWA 2010. When I send mail, the emails go to Drafts Folder.
http://social.technet.microsoft.com/Forums/en/exchange2010/thread/e7d72510-3d86-41ea-ba1a-b742aeb4ccc8
However, I knew that this was not my case, because I know for 100% that I used SYSPREP before cloning MY systems.
And then, like a hammer in the head, I remembered that I forgot to select the “GENERALIZE” option in SYSPREP. Unlike previous versions, it seems that this version will NOT change the SID unless you pick that option. 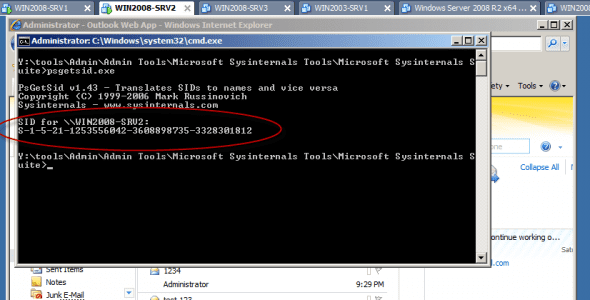 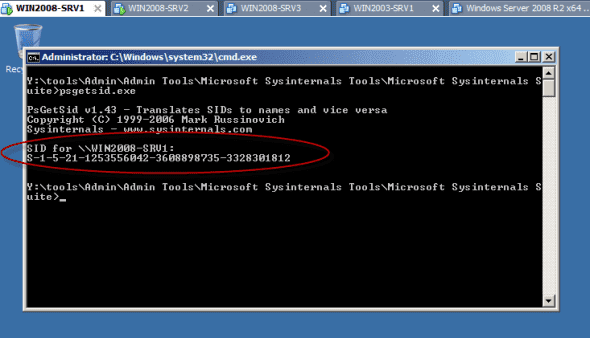 There goes my lab!
Luckily, I still had my base images cloned, so I could scrap everything and re-build, this time, properly running SYSPREP with the GENERALIZE option!
Lesson learned.