Because of the length of this article, we’ve broken it down into three parts. However, we suggest you read it from Part I through III. Let’s get started.

What is Desktop Virtualization?

You see, people usually associate desktop virtualization with VDI. There’s nothing wrong with that. But while VDI or Virtual Desktop Infrastructure is a kind of desktop virtualization, it is certainly not the only one. Other forms of DV include: client hypervisors, streaming, application virtualization, and terminal server.  We’ll cover each of these in more detail later. But in the meantime, let’s describe them briefly.

VDI – This is the most popular type of desktop virtualization today. It allows users to access dedicated virtual machines (VMs) that are hosted on servers like Hyper-V boxes, ESX boxes, XenServer boxes, etc.

Client hypervisor – Similar to a server hypervisor but is installed on a client, not a server. Normally, it is used on laptops but can also be used on desktops. It can abstract the hardware from the software, thus allowing one version of a VM to be deployed on different brands of laptops. In addition, it can allow you to install multiple VMs on a single laptop.

Streaming – Makes use of a single image file that is streamed over a network into end users’ computers. In this type, end users may no longer need a local hard disk. All that a user will need is memory and a CPU to run the streamed OS or application. Other platforms like VDI or application virtualization have variants that already implement streaming, so we’ll take this up as part of those platforms.

Application Virtualization – Allows an application to run on a physical machine without having to install it there. You can use this technology, for example, to run a Windows application on Linux. This arrangement also prevents the virtualized application to conflict with other applications.

Terminal Server – This is a server system that offers terminal services. It enables the use of dumb terminals and access to remote applications or desktops. It is similar to VDI except that users are given sessions for connecting to the server instead of dedicated VMs.

As you can see, there are many platforms of desktop virtualization and each have their own advantages. Later on, we’ll discuss the pros and cons of each platform so you can determine which ones are best suited to meet certain needs. But now, let’s have a look at some of the factors driving companies to consider desktop virtualization.

Why are some companies considering desktop virtualization?

It can ease migration to the latest operating system

When a new version of Windows comes along and its predecessor reaches end-of-life, companies are simply forced to adopt. For example, when Microsoft announced that they would no longer be providing support, service packs, and updates for Windows XP, companies were left with no other choice but to plan for a Windows 7 migration.

But upgrading hundreds or thousands of desktops to a new OS version is no easy task. A number of compatibility issues can arise. For example, your custom applications may not run properly on Windows 7 or web-based apps may not function properly on Windows 7’s Internet Explorer 8. Furthermore, massive upgrades and the accompanying application installations can be very time-consuming, disruptive, and costly.

With desktop virtualization, it is possible to let applications run on almost any kind of OS – old or new. It is even possible to package the OS, applications, and profiles on a single image and assemble multiple virtual desktops for all your users. You can then simply stream the OS and/or the application to thin clients without having to go through time-consuming installations.

It can lower cost and is environment-friendly

Because certain desktop virtualization solutions reduce the amount of hardware and storage space needed when providing desktop services, it can help companies save money. Some of these solutions (e.g. streaming) even require minimal server infrastructures, and that should very well translate to lower energy consumption compared to traditional systems.

Desktops are one of the most difficult components to manage in a computer environment. Issues can pop up anytime. And each time a site visit is needed to resolve an issue, long disruptions can follow. Imagine this happening on a very large organization. These long disruptions, which render affected end users unproductive, can be very costly.

In comparison, when virtualized desktops are placed in a centralized location, a large part of the troubleshooting won’t have to be done on the client side. In fact, IT personnel can even troubleshoot remotely, thus saving time on their side. On certain scenarios, a quick machine re-imaging can be performed, this time saving time on both the IT and the end user’s side.

Desktops are usually left out in BC/DR planning. When it comes to preparing for BC/DR, companies usually focus their IT investments on technologies for protecting and recovering data.

Of course, your data should be given utmost importance. However, even if you’re able to quickly recover your data after a major disaster, your company still won’t be able to get back into operation if your desktops aren’t available. How would your users go back to work?

Traditional desktops are practically linked to the hardware. If the hardware is seriously damaged, it would be very difficult to restore your desktop exactly the way it was. By comparison, virtualized desktops are completely isolated from the hardware. Because of that, they’re easy to backup, replicate, and restore – that’s almost everything you need to enable BC/DR for desktops.

It can enable companies to practice BYOPC (a.k.a. BYOC or CYOPC)

One new concept that companies are adopting nowadays is the BYOPC (Bring Your Own PC) or BYOC (Bring Your Own Computer) or CYOPC (Choose Your Own PC). This entails giving employees a certain amount of cash and allowing them to go out and buy computers of their own choice.

But there’s a problem here. What if a PC does bog down? Even if the company is no longer obligated to troubleshoot and repair it, the productivity of the user will still be affected. This can subsequently affect the company as well. It doesn’t look like a brilliant idea anymore, does it?

Other issues that you probably overlooked but really need to address when going into a BYOPC arrangement include:

As you’ll soon discover in the second part of this article, desktop virtualization is perfect for BYOC because it easily addresses all these issues.

Server virtualization was a smashing success

Server virtualization introduced a lot of benefits to IT, like: improved up time, high availability, savings in CapEx, ability to implement server consolidation and containment, and so on. These breakthroughs led companies to think that similar benefits could also be realized with desktop virtualization.

But while desktop virtualization does introduce certain benefits, those benefits are different from that of server virtualization. For instance, DV won’t let you save on CapEx. Instead, you’ll realize savings in OpEx. We’ll elaborate more on that later.

Enables the use of Thin Clients

Some desktop virtualization platforms, especially those that are server-based, support Thin Clients. Many of these clients have nothing except except CPU and memory. In the case of Pano Logic’s Pano Zero Client, even CPU and memory are non-existent. You simply connect a keyboard, mouse, VGA display, and audio output and you’re ready to go. Because there’s no data or software on them, hackers won’t have anything to exploit on the device.

Other devices that can already serve as Thin Clients include: tablet PCs (like the iPad), smartphones, and netbooks. These are devices that have very minimal hardware resources compared with regular desktops and laptops, but still – using desktop virtualization – you’ll be able to access your desktop remotely through them.

These are very valid reasons to consider desktop virtualization and that’s why many companies are already going in that direction. Before we end the first part of this article, we’d like to take up one topic that’s creating a lot of buzz in the tech/IT world and which is very much related to desktop virtualization.

As far as we see it, cloud computing is inevitable. Whether you like it or not, that’s going to be how computing will be in the future. Don’t believe it? Well, in case you haven’t heard, Microsoft has now moved Office to the cloud by way of Office 365. If the most widely used suite of applications has gone to the cloud, then you can be sure a lot of end users will find their way there too.

In 2010, we already saw more and more companies taking advantage of the benefits of virtualization to implement BC/DR, reduce outages, increase high availability, and improve resource optimization. We also witnessed adoption of server virtualization for Tier-1 applications like Exchange, Oracle, etc. We even saw the rise of advanced desktop virtualization technologies like VDI.

Today, we’re seeing companies going into automation and orchestration; storage, network/IO, and application virtualization; and integrated physical/virtual management. Companies are starting to make use of self-service portals, policy-based management, and chargeback/utility style billing. But where is this all heading?

So as the business world takes this inescapable journey to the cloud, the logical thing to do is to be prepared for it. What you’re doing now is a tiny but nevertheless wise step to the right direction. In Part II, you’ll move some more to that direction as you get a closer look at the different types of desktop virtualization. 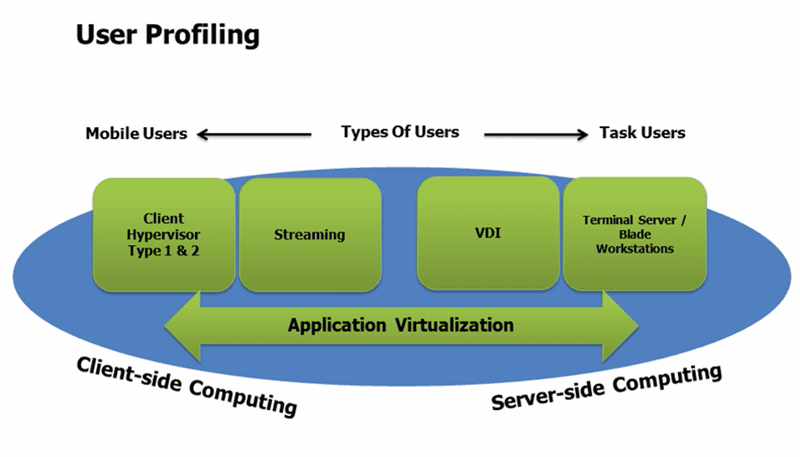