Deciphering Microsofts Branches, Rings, And All The Other Things

If you hang around the Microsoft ecosystem long enough, then you’ll hear the company talk about rings, branches, and a lot of other company specific vernacular that describes the processes they use to test software. This week, the company added a new ring to their testing process, which means now is a good time to dig deeper into what all this means.

The company has four main branches of operation, and they are defined below by Microsoft. Each branch is targeted at a specific scenario from the consumer (CB) all the way up to the enterprise or manufacturing sector that needs long-term support with a priority on stability for each release (LTSB).

For testing new software, specifically with Windows 10, the company developed a ‘ring’ system for allowing groups to test the new builds. At a high level, the builds are deployed internally, and if found acceptable, they are released to the Insider Fast ring and then eventually to the Slow ring. 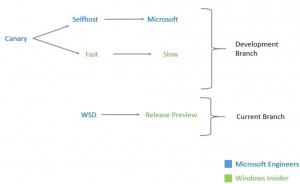 To graduate to each ring, stricter criteria is used so that, in theory, as more users get their hands on the build, it should be more stable. But, the software is still in the early phases of development, which means that it is possible for serious bugs to make it all the way to the Slow ring, as these builds are not official public releases.

This week, the company announced a new provisioning ring for Windows Update. This new ring is for people who want to receive patches for the current stable release of Windows 10 ahead of the general public. In practice, this should be the safest ring other than the actual release branch, as the patches released in the new ring will still be tested before release. This new layer, however, provides a little bit more telemetry before the general release if the patch is stable.

Finally, on occasion, you may hear the company use the term ‘flight.’ I most frequently hear this term used with the Bing team, but it typically means trialing a layout or update in production, often thought of as A/B testing.

All of these phrases are widely used across the organization, you will likely hear them used by other branches of the company. While these three terms are not all-encompassing, when you have a company of 100k employees, localized terms are common, it should help the outside better understand how the company communicates internally.