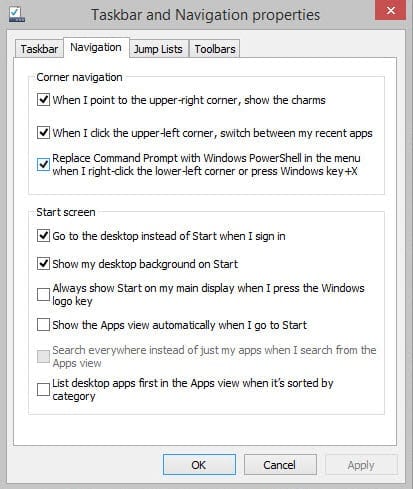 How can I boot directly to the desktop in Windows 8.1 and Windows Server 2012 R2?

The Modern UI interface (previously Metro) in Windows 8 and the new Start screen have been quite controversial, and the inclusion of the same interface in Windows Server 2012 comes as no surprise, because Windows client and server releases share the same code base.

While it could be argued that the Modern UI in Windows Server should be an optional add-on as part of the Desktop Experience set of components, for whatever reason, the Modern UI and its Start screen are present by default whenever the GUI is enabled on Windows Server.

Whenever possible, you should install Windows Server in the default Server Core mode, as it has a reduced attack surface and smaller footprint than the full GUI version. However, there are some applications that require the full GUI. In Windows 8.1 and Server 2012 R2, Microsoft is giving users the option to jump straight to the desktop like this:

The next time the user logs on, they will boot directly to the desktop instead of the Start screen.

How to Configure Boot to Desktop Using Group Policy

This is a per-user setting, so if you want to apply this setting to all users, you’ll need to change this setting for each user that logs on to the machine. Although there’s no option to configure boot to desktop for all users via Group Policy, it is possible to set the OpenAtLogon registry value under HKCU\Software\Microsoft\Windows\CurrentVersion\Explorer\StartPage\ using Group Policy Preferences. Setting the value to 1 takes the user to the Start screen, and 0 to the desktop.