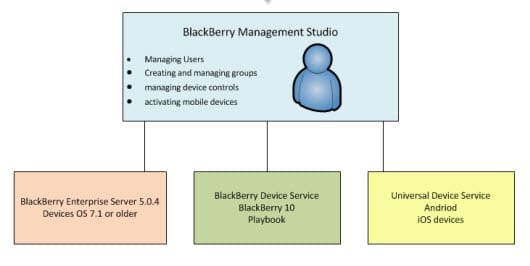 BlackBerry Enterprise Server 10.1 (BES) is not your dad’s BES server – it’s a whole new product designed for today’s growing mobile workforce. Since early 2012 there have been so many changes within the BlackBerry MDM platform – new products, name changes, and most recently, another redesign – that it can actually be confusing on how to deploy or upgrade a BES server. This guide will break down what you’ll need to do to get yourself on the road to deploying or upgrading to BlackBerry Enterprise Service 10.1.

BES 10.1 is now a complete Enterprise Mobile Management system that can used to protect your corporate-or personally owned devices. Gone are the days of just using the BES server for BlackBerry devices – you can now manage androids and iOS devices using the Universal Device Service.

Let’s just skip to chase and forget we ever heard the name BlackBerry Fusion. Renamed and revamped, the former Fusion products and BES 5.x server are now part of what is called the BlackBerry Enterprise Service 10 suite. The suite has merged together the following products:

BlackBerry Balance (only on BlackBerry 10 and Playbook devices) provides a secure environment where you can separate work and personal data. For Androids and iOS devices there is now Secure Work space which provides the same type of secure container in which work and personal spaces are encapsulated, providing added security.

If you are currently running BES 5.x and have devices with BlackBerry OS 7.0 or older, you will still need to have that version of BES running because the BlackBerry Device Service only supports Playbook and BlackBerry 10 devices. Confused yet? I was scratching my head when I heard this as well. How can this make sense if they are advertising that the BlackBerry Enterprise Server 10 can do it all?

Well, it can… sort of. BES 10.1 uses the BlackBerry Management studio (BDS), a unified management console that can manage multiple BES domains from one single management console. Since the BlackBerry Device Service only supports the new generation of BlackBerry devices most businesses would still need BES 5.x running in order to support older devices. The BDS provides a central administration tool for the new and old devices. Once BDS is setup and running, using the new administration tool to provision devices and accounts is actually quite easier than other BES version.

The Universal Device Service (UDS) is the component used to manage Androids and iOS devices. The UDS is an ActiveSync-based service that communicates with android and iOS devices, giving you the ability to push IT polices, configure Wi-Fi settings, provision VPN, and email polices. The requirements for the UDS are slightly different because there is a component that needs to be in the DMZ to communicate to Android and iOS devices. Advanced planning is recommended for deploying the UDS due to additional DMZ requirements.

The road to new versions of BES has been made much easier with the recent release of the update BES 10.1. Prior to this release BlackBerry Enterprise Service 10 was not supported to be installed on the same server as BES 5.X, requiring additional servers to be deployed. Whether you’re upgrading or deploying a brand-new BES 10.1, you have some deployment options: You can choose to install BES 10.1 independently of BES 5.x and have those both managed through the Management Studio, or you can install on the same server. 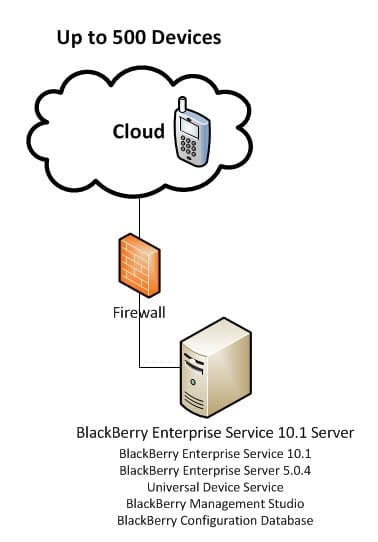 With larger deployments entailing more than 1,000 devices BlackBerry recommends splitting off UDS and BDS on different servers to get the best performance on BES 10.1.The same recommendations apply to upgrades as well. 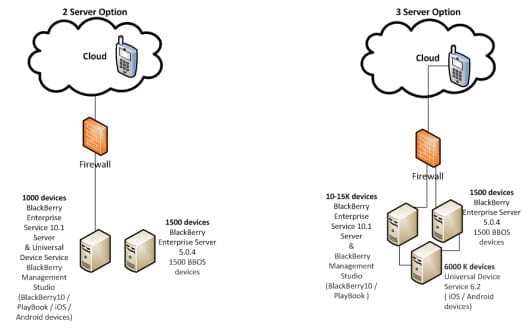 BES 10.1 has a whole new set of licensing requirements that defers from the original BES Cals in previous versions. There is now an EMM-Corporate for BlackBerry and EMM- Corporate licensing model. Prior to using BES 10.1, you will need upgrade your existing BES cals and convert them to license activation IDs using the management studio. A valid BES SRP host, a SRP identifier, and a SRP authentication key are still needed to validate your BES server during installation. Have these on hand to make sure the installation goes smoothly.

There have been many changes for BlackBerry, so before you start upgrading your current BES servers, do some planning to determine what exactly you will need to do. You may find that the new BlackBerry Enterprise Service 10.1 can suit your needs for a complete MDM solution covering Android and iOS devices.