In this post, I will discuss a new SQL Server option that recently launched a preview in Azure called SQL Managed Instance, enabling you to run a private, managed version of SQL that is almost 100 percent compatible with on-premises SQL Server.

In a post, I  wrote a few months ago, I compared and contrasted the (then) two options for deploying SQL Server in Azure:

I believe that Azure SQL is a better offering. So why doesn’t everyone use it? As one comment on the post indicated, sometimes we have old code that expects to find the features of SQL Server and it is simply not there. Azure SQL gives you connection string access to SQL databases but it’s not the full-blown lots-of-services SQL Server that you know from the past.
Azure SQL is great for new projects but it’s no good for lift-and-shift. It turns out that customers have a lot of lifting-and-shifting that they’d like to do. Those customers have had no choice but to bring SQL Server virtual machines to the cloud, which only extends the old problem. It isn’t exactly the most affordable! Microsoft wants more people in the cloud, their cloud to be precise, so they are will to engineer solutions to make it easier. 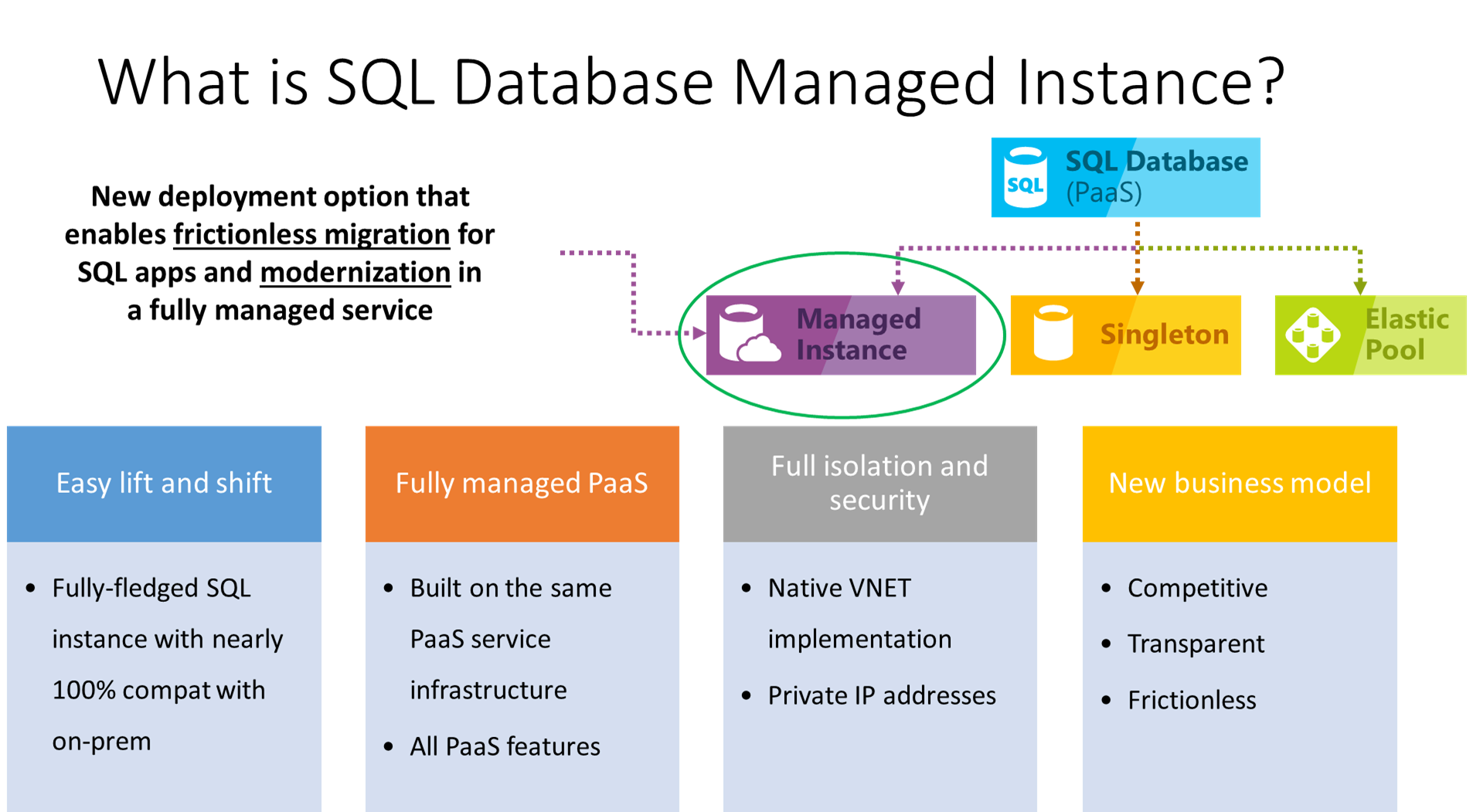 The primary goal of SQL Managed Instance is to give you a path to migrate to Azure. Let’s say that you wish to move an application to Azure and that the database runs on SQL Server. Historically, you had no choice but to move the database machine to Azure too or to redeploy it as another database virtual machine. All that accomplished was that you dropped the tin but most of the operational challenges remained.
Instead, you can use the Azure Data Migration Service to migrate the database to a managed instance running in Azure and immediately take advantage the reduction of operational workload that PaaS can bring to the table. Perhaps, the database will remain there forever, or maybe you will upgrade the application later to take advantage of the lower cost Azure SQL offers.
Note that a managed instance can host up to 100 databases on 8TB of Premium storage with between 5000 and 7500IOPS per data file (database).

A secondary reason to consider SQL Managed Instances is that it provides a private connection point to the service via a virtual network. 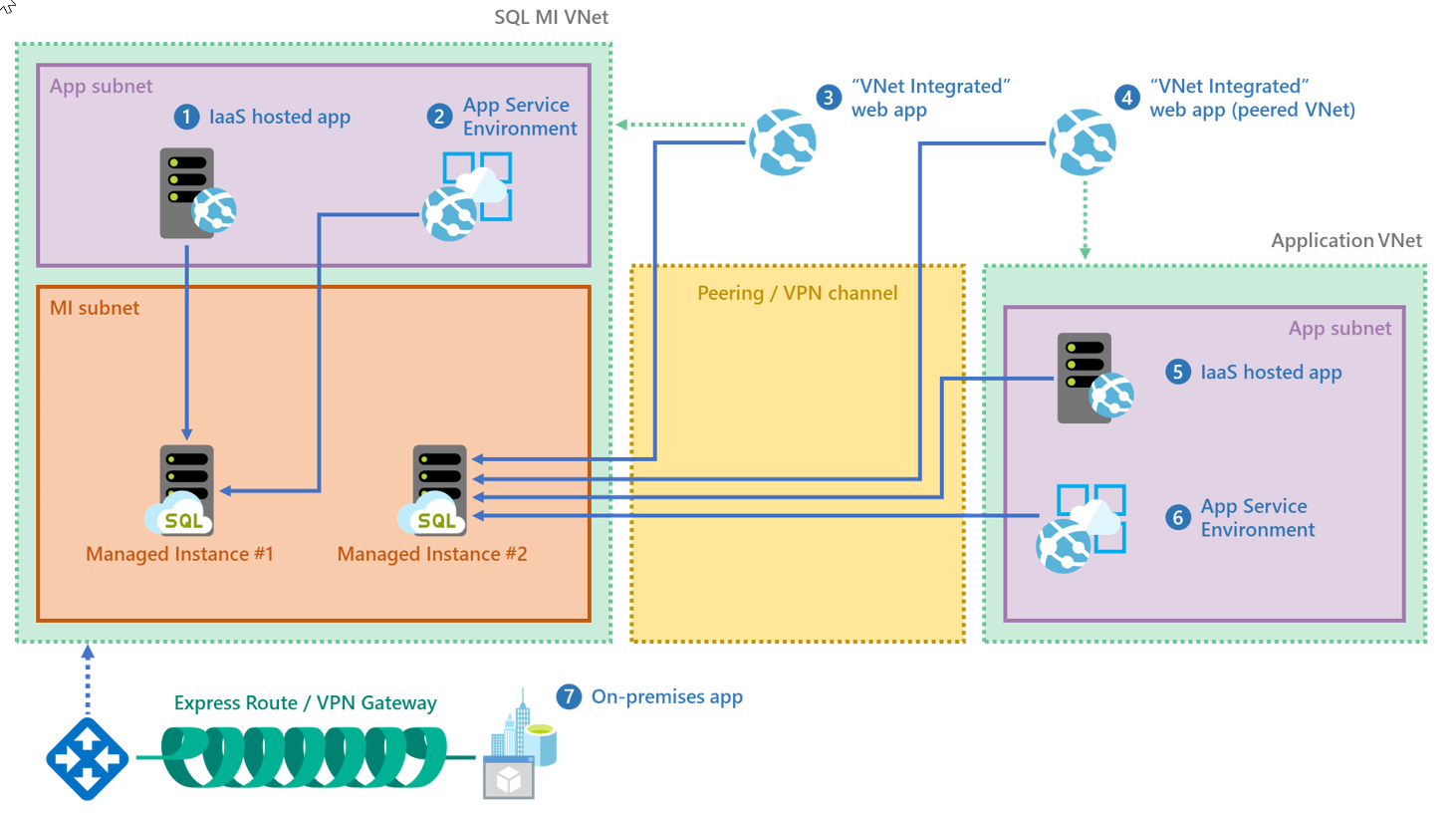 SQL Managed Instance is deployed to a virtual network (ARM only) and can be connected to by other PaaS services and virtual machines across that virtual network. Customers can also have private connections to the database across site-to-site VPN or ExpressRoute connections.
Some customers might choose to deploy SQL Managed Instances because of this privacy, much like how we can deploy App Service Environment (ASE) for the private hosting of app services or web apps.

The pricing for managed instances is not nearly as cheap as that of Azure SQL but you are getting a full database instance to yourself! It’s probably also more affordable than a mid-large virtual machine. Keep in mind that the instance can host up to 100 databases.
You can deploy Azure SQL Database Managed Instance in a General Purpose tier today and soon there will be a higher cost Business Critical Tier. The general purpose tier is available with:

The above costs are for US Dollar over 730 hours in the East US region using the RRP pricelist.
If we compare that with a virtual machine alternative, the D8_v3 (8 cores) with SQL Server Standard, not even Enterprise, which is what you get with Azure PaaS, will cost $1,097.92/month.
Also keep in mind that Hybrid Use Benefit, if you have Software assurance on your SQL Server licensing can bring down the managed instance prices by 40 percent – $444.39/month for the 8-core General Purpose option.
A deployment comes with 32GiB of storage. Additional costs will include storage:

The managed instance option for Azure SQL could prove to be very popular as a path to cloud transformation for mid-large businesses. I would have liked to have seen a 4-core option for small-mid businesses who also have smaller applications to migrate.