5 Features Windows 9 Needs to Have 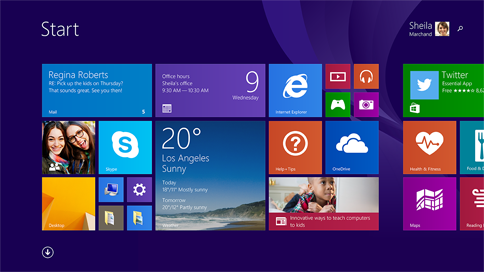 There have been some recent rumors that indicate Microsoft is planning to offer Windows 7, Vista and XP users a free upgrade to Windows 9. That may be wishful thinking, but moving everyone away from legacy platforms makes sense. Cost isn’t necessarily the primary consideration for users that have clung onto XP for dear life, but it brings to the equation an additional carrot and stick. The inconvenience of upgrading and the lack of any clear benefits are more likely principal concerns.

I recently purchased an SSD for my Ultrabook and was dreading the thought of having to reinstall Windows and my desktop applications. However’ Samsung’s Magician software made the process of imaging the factory-fitted 5400rpm hard drive to the SSD a quick, one-step process. And with the promise of a lightning fast experience post upgrade, I didn’t need to spend much time considering if it was worth it.

Windows XP users need to be provided with an easier way to migrate to Windows 9. If you have upgraded Windows Phone 8 to 8.1, then you will have seen how the OS is reinstalled and the apps and data migrated. Until everyone moves to a platform that is designed from the ground up to be secure and easy to migrate, Windows XP users will be trapped in a world where every new release of Windows grows further out of reach.

Windows 8 isn’t perfect, but neither is it the car crash that some commentators would like you to think, and I couldn’t imagine going back to Windows 7, let alone XP. With the exception of the Modern UI, the changes in Windows 8 are more evolutionary than revolutionary, and although those small changes add up to create significant benefits, they don’t make an easy sell. Windows 9 needs some compelling benefits that can be marketed to persuade users to move away from Windows 7 and XP.

Add the lack of any must-have Windows 8 apps (please correct me if I’m wrong), and it’s easy to see why consumers might fail to get the point. The release of touch-friendly versions of Microsoft Word, Outlook and Excel in the next version of Office might go some way to persuade users that they can be productive in the Modern UI, but these apps at least initially are unlikely to be as functional as their desktop counterparts.

As if to exclude Windows 8, it’s always been possible to re-enable deprecated UI features to some extent. Corporate users rushed to make Windows XP look like Windows 2000 Professional, and Windows 7 can still be made to look and feel much like Windows of 15 years ago. Microsoft is planning to introduce a Start menu as an option in Windows 9 and enable Modern UI apps in desktop windows, which should assuage the need for users to ever see the Start screen if they so desire.

I would also argue that desktop integration features introduced in Windows 8.1 Update 1, such as the pop-up task bar that can be seen from the Start screen, should be optional. While the improvements Microsoft made to Windows 8.1 Update 1 were crucial, the experience has become muddled and needs to be simplified for those who wish to only use the desktop or only the Modern UI. Moreover, there should be one mechanism for switching between and viewing open applications.

The Modern UI represents a completely new paradigm and needs to be pervasive if it is to have a successful future. Getting users onto a platform that supports the new UI is going to be important in helping secure revenue, even if that means running Modern UI apps on the desktop.

Bearing in mind that the Modern UI is a technical foundation, not just a user interface, it will also allow Microsoft to concentrate efforts on a unified platform that can be supported well into the future.

On the flip side, organizations will be able to consolidate management efforts, improve security and productivity, and easily deploy apps to different types of devices to give users access to corporate applications and services.