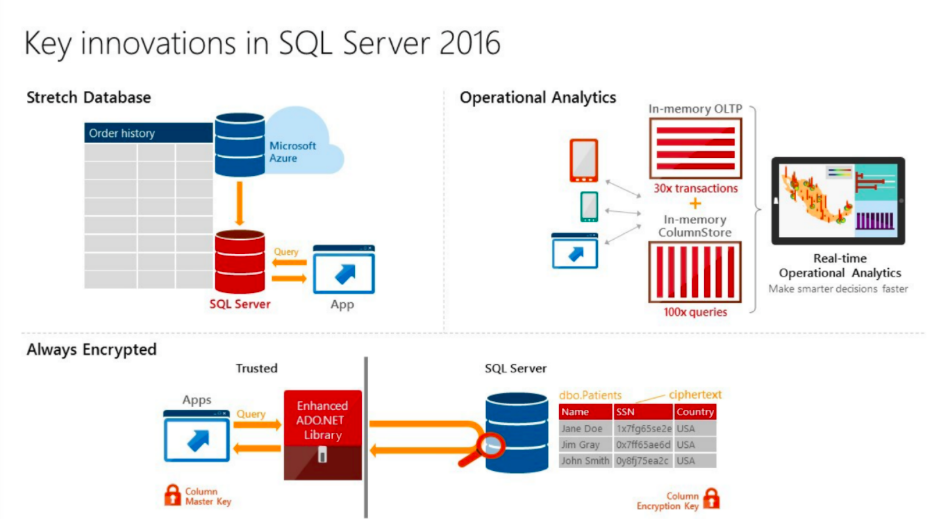 Continuing on what SQL Server 2014 achieves for on-premises and cloud databases, SQL Server 2016 similarly works to provide greater performance and data insights for mission-critical applications. SQL Server 2016 includes new Always Encrypted and Stretch Database capabilities, which will be discussed in detail below.

Additionally, Microsoft is bringing several different benefits to on-prem and cloud customers alike, where the company is bringing row-level security and Dynamic Data Masking to Microsoft Azure SQL Database, as well as providing hyper-scale capabilities to on-prem offerings. “This means all our customers benefit from our investments and learnings in Azure,” said T.K. Ranga Rengarajan, Corporate Vice President of the Data Platform division at Microsoft, in a recent post featured on the SQL Server blogs.

In the SQL Server 2016 CTP2, you’ll be able to delve into the following features:

Always Encrypted. SQL Server 2016’s new Always Encrypted capability protects data at rest and in motion, which enables users to perform operations on encrypted data. What’s great about this feature is that the encryption key lives in the application in the customer’s environment, making it possible for the encryption and decryption of data to happen transparently inside the application.

In-Memory OLTP. Although in-memory OLTP isn’t new to users of recent versions of SQL Server, Microsoft is continuing on delivering great performance capabilities by building on top of this technology. SQL Server 2016 users will be able to leverage OLTP on a greater number of applications, and Microsoft’s in-memory columnstore capability will be able to deliver queries that are 100X faster on top of in-memory OLTP for real-time operational analytics.

Instead of rolling out a CTP3, Microsoft has stated that it will provide periodic updates to CTP2 with new features and capabilities. You can download the SQL Server 2016 CTP2 from the Microsoft TechNet Evaluation Center today, and you can visit the SQL Server 2016 preview page to learn more information about the upcoming release.

If you decide to play with the CTP2, I’d love to hear your thoughts about the first look into SQL Server 2016. Drop us a line either in the article comments below, or give us a shoutout on social media via Facebook, Twitter, or LinkedIn.