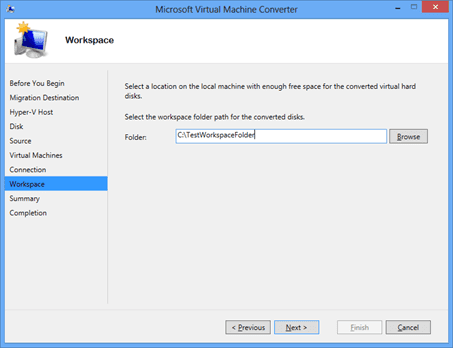 Microsoft announced the release of the second version of their VMware-to-Microsoft virtualization conversion tool, the Microsoft Virtual Machine Converter (MVMC) 2.0 (download at the link). The announcement was on the Server and Cloud blog, so a little bit of marketing was thrown into the mix. Microsoft wants you to know that small, medium, and large enterprises are making the jump from vSphere (and management stack) to Hyper-V (and System Center).

In the blog post, Microsoft noted that “Hyper-V has had four times the growth of VMware’s ESX over the past three years.” Not all customers are performing a clean migration; some are deciding to run vSphere and Hyper-V, and maybe even XenServer and/or KVM. Sometimes you choose the right platform for the workload in question. And sometimes you say, “We’ve invested X thousand dollars in vSphere. Let’s leave that running where it is, and start using Hyper-V for new workloads.”
Granted, I do enjoy rattling the cages and getting heat from VMware fans, but I want to focus more on the “how” rather than the “why” in this article.

How We Converted in the Past

System Center Virtual Machine Manager (SCVMM) was the conversion tool of choice in the past when moving virtual machines from vSphere to Hyper-V. It offered two methods:

The process required quite a bit of manual work for each virtual machine, including removing the VMware tools. This might be why we’ve seen larger organizations either be slow about moving from VMware to Microsoft (running both hypervisors) or deciding to maintain vSphere until the workloads are deprecated.

The MVMC was released to work with Windows Server 2008 R2 (W2008 R2) Hyper-V and Windows Server 2012 (WS2012) Hyper-V. The tool is installed on an administrator’s PC. That PC should have plenty of fast disk capacity (you’ll understand why soon). Using the tool, an administrator could reach out to vSphere, grab a virtual machine, pull it down to the PC for conversion to a Hyper-V virtual machine (including replacing the VMware Tools with the Hyper-V integration components), and place the resulting virtual machine onto a Hyper-V host or cluster. The conversion takes place on your PC, so you need enough capacity for over twice the size of the VMware virtual machine’s files, and you’ll ideally want to use very fast disk. Consider using an enterprise-class desktop SSD or pool of SSDs.

The conversion workspace on the PC.

You could click through the GUI, which isn’t a bad idea for the first few conversions. But after a while the process becomes dependable and you would want to automate it. The MVMC had a command-line interface and larger organizations could use System Center Orchestrator to create automated conversion runbooks. The more adventurous service oriented organizations could even think about importing those runbooks into a Service Manager service catalog where “end users” could use self-service to migrate their virtual machines from vSphere to Hyper-V.
The MVMC was built for the technologies that existed back then. But the biggest flaw was that Microsoft did not have a method to convert virtual machines with non-Windows guest operating systems.

And Microsoft also updated MVMC to deal with new scenarios:

Note that a nice set of documentation for MVMC 2.0 and the PowerShell cmdlets is included in the download. 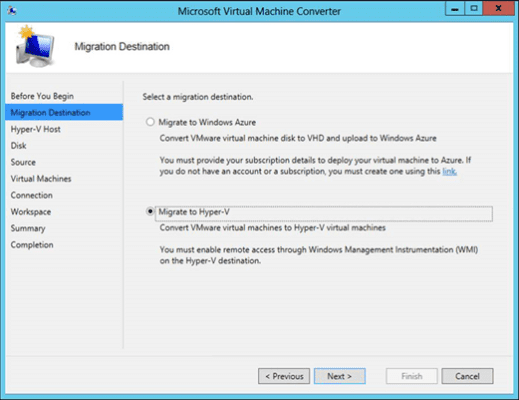 Choose whether to convert to Hyper-V or Azure.

What About Physical-to-Virtual Conversion (P2V)?

This was a process that used to be done in SCVMM until the release of System Center 2012 R2, when P2V conversion functionality was controversially dropped. The answer from Microsoft was to temporarily run SCVMM 2012 SP1, which is not a very good solution.
In this latest announcement, we have been told that MVMC 3.0 will be released in the fall of 2014, and that it will include P2V conversion functionality. The potential of doing P2V conversions using PowerShell and embedding the process in Orchestrator/Service Manager will be mouthwatering for many consultants and engineers.