What I Want to See in the Surface Mini 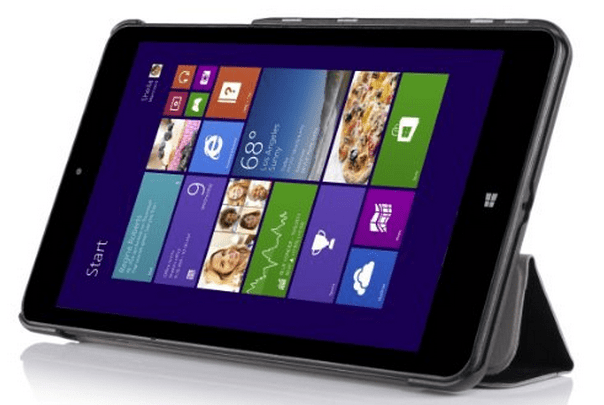 Microsoft watchers were recently launched into a frenzy when a cover/case for a “Surface Mini” tablet was launched on Amazon. Rumors have circulated for some time that Microsoft was working on an 8-inch version of the Surface tablet. Was this advert the real thing? Was it a scam? And if the Surface Mini is real, will it come with the features that I want? 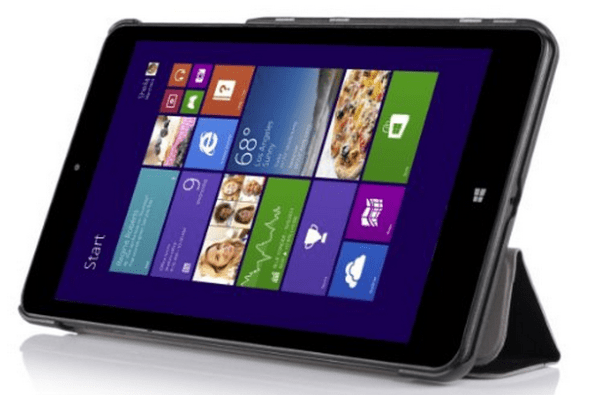 The alleged Surface Mini from the advert. [source: VSTO advert on Amazon]

The advert on VSTO told us nothing more than a Surface Mini was allegedly coming out. The name “Mini” obviously lead us to believe it was a smaller companion device. As we can see in the screenshot, VSTO was also alleging that the device was a portrait-mode machine, meaning that it was likely an 8-inch tablet like the Toshiba Encore or Dell Venue 8 Pro.
On May 5, 2014, Microsoft newshounds confirmed that invitations had been sent out by Microsoft for a media event in New York on May 20. Blogger Mary Jo Foley described it as a “Surface event.”

Nothing is really known about a Surface Mini. There are rumors that it is powered by a Qualcomm ARM processor, meaning that the tablet will run the Windows RT 8.1 operating system. At first, this sounds like a horrible mistake by Microsoft. All of the other 8-inch tablets have Intel Atom processors that run the “real” 32-bit x86 Windows 8.1. Those tablets even come with Office 2013 Home & Student (which requires a license upgrade to be used for commercial purposes).
One might think that this puts the Surface Mini at a loss, as it won’t be able to run the huge array of x86 software that is available. That is true, but as the owner of a Windows 8.1-powered 8-inch tablet, I’d question the value of it as a “PC.” To be quite honest, I find such a small screen to be horrific for productivity. For me, 8-inch tablets are best on the couch, on a plane, and in the bed. My tablet is what I use when traveling and when doing light browsing – it is a companion device. I think I fired up Office on it only once, just to see it. I use “Metro” apps as much as possible. I even use the built-in mail app instead of Outlook – I use Outlook instead of the mail app on every other 10-inch or larger device.

There is also some talk of this tablet having a digitizer stylus. As a business person I love this idea. I have become a serious user of OneNote. I use this tool to take notes in meetings, to record pages that I need to read, take notes at conferences, remember places to visit for photography, collaborate on events, and to plan vacations. To me, a stylus is a big deal. The presence of a stylus was a factor in my decision to buy a Lenovo Thinkpad S1 Yoga convertible Ultrabook: I can type notes with the keyboard and switch to stylus when I need to diagram something or have a digital whiteboard. My Toshiba Encore tablet does not have a digitizer stylus, which means I find the device a little lacking. I would like to change that so I could take notes on a small device.

A companion device, to me, must be able to play video on a flight from London to Seattle without an additional charge. Ideally, it should also start the journey in Dublin with the hop in London. I have a Lenovo Yoga 8 Android tablet that can easily do this. It was advertised to last up to 18 hours (thanks to an unusually large battery), but my experience leads me to think that Lenovo were being very conservative with that guesstimate. For a Surface Mini to replace that Yoga 8 as my travel companion, I would want 16 hours of battery life. I know that sounds like a lot, especially when the market default is 10 hours, but I’m not every person. I use my tablets, and I expect them to keep up with me.

Sorry Microsoft, but 32 GB of storage is not enough. A machine with just a few GB of free storage is pretty unusable. Sure, you can add additional SD storage, but Windows 8.1 still doesn’t treat it like native storage. Apps are installed on C:, and OneDrive is a mess if moved. Microsoft claims that the April 2014 Update for Windows 8.1 will solve this issue for new devices. It sounds like Windows 8.1 will boot from a WIM file, like the install.wim that is on the Windows 8.1 media (in the Sources folder) instead of from files that are copies to the C: drive. I’ve not seen how this will work so I can’t comment on the benefits or drawbacks of the solution. I need 32 GB of free storage, which is enough for my photos, books, podcasts, and video files for the flights to and from the west coast of the United States from Europe.

If there’s one thing that Surface has contributed to the world of the tablet, it’s the kickstand. I can’t use an iPad anymore because I need a kickstand. I don’t like covers that offer the function; they aren’t as flexible or as sturdy – not to mention that they require more space than a tray table offers at an economy seat aboard an aircraft. A variable kickstand has become a must-have in a tablet for me. 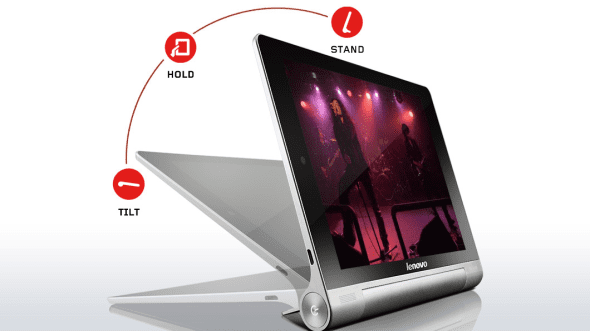 My Lenovo Yoga 8 spends more time upright than lying down.

As a companion device, the 8-inch tablet is used a lot for multimedia purposes. Any tablet that has a wimpy audio output is useless to me. I use expensive noise-cancelling headphones, but I’ve found Windows Phone-powered devices don’t produce enough volume on an aircraft. On the other hand, I found that premium Android phones are much better to listen to. I want decent onboard speakers in a companion tablet, such as the Surface Mini, and the audio produced by the 3.5 mm jack must not be crippled by lawyers.

What good is a companion device if it has no apps? I hear some people say that you can still run those apps in Internet Explorer. Sure you can if:

Apps are generally required for a good experience, and unfortunately, the Windows Store shelves are pretty bare. There’s lots of “fart” apps and pay-ware for the desktop, but not much in the way of high-quality apps. This drives me back to my Android tablet again and again.
Microsoft can produce a tablet, but can they make it available to purchase? History says no, no they cannot. Microsoft has really messed up the distribution of the Surface brand. I don’t expect that this will change, even with the addition of Nokia.

My last requirement is a simple one. If I get a Surface Mini in May/June 2014, then I need to be able to upgrade it to the next version of Windows in 2015. It has been hinted by Microsoft that one operating system will replace Windows Phone and Windows RT. That makes sense, as it will greatly expand the market for developers and hopefully attract more apps to the Store. One OS will reduce the effort for Microsoft in the long term. One experience will simplify usage for consumers. And one OS will give Microsoft an actual ecosystem.
My worry is that we’ll see a repeat of the Windows Phone 7-to-Windows Phone 8 jump. Those who bought lovely new phones at the end of the WP7 life found out that they were stuck on WP7. WP8 would not be backported for those devices. Will we be able to upgrade Windows RT tablets to “Windows Mobile vNext”? Common sense says that it would be suicide to release a high-profile device that could not be upgraded 10 months later. History suggests that Microsoft makes these kind of mistakes way too commonly.
A Surface Mini could be a high-class device that could become the flagship of Windows mobile devices – if it’s done correctly. I’m a pretty demanding user, but I suspect that my desires are not unique. What else do you want to see in a Surface Mini? Let us know in the comments!