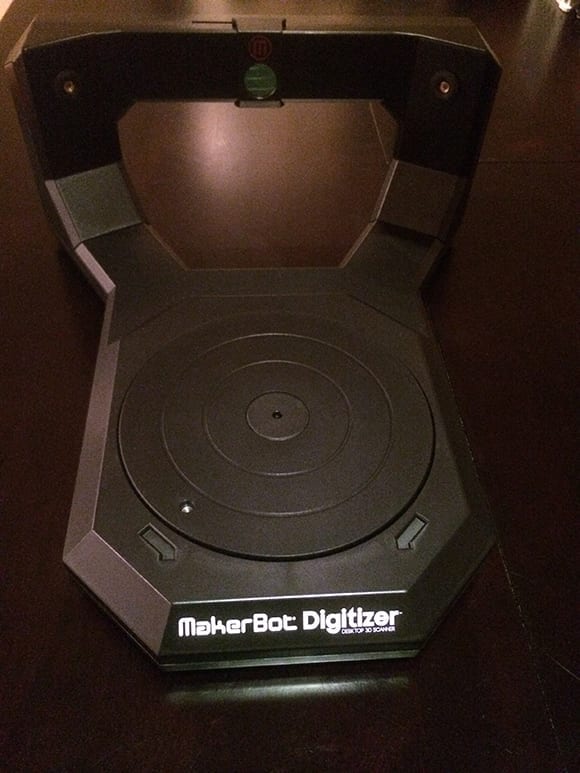 The MakerBot Digitizer is perhaps one of the most exciting pieces of tech I’ve seen in a while. The Digitizer is the reverse of a 3D printer. Instead of turning a computer file into a 3D object, the digitizer turns a 3D object into a computer file. Think of the possibilities! Lose one of the mounting brackets to a network switch? No biggie! Scan the remaining bracket with the Digitizer, print the scan to a 3D printer, and you’re back in business. Work for an organization or school that creates products by hand, such as small sculptures or wooden trinkets? Digitize these precious items and be able to recreate them later. Of course, potential is one thing while real results are another. It’s time to put the MakerBot Digitizer through its paces and see how it performs.

The MakerBot Digitizer has a pretty cool design. It’s basically a turntable with an arm overhead that holds two lasers at opposing angles and a camera in the center. The turntable slowly rotates the object to be scanned while one of the lasers projects a beam onto it. The camera, with a red filter in place, records the profile of the laser where it is hitting the object. After one 360-degree rotation the whole process is completed again with the other laser. Once the second rotation is complete, the data is merged into a complete scan and a 3D model is built within the MakerWare for Digitizer software. The turntable always rotates at the same speed, thus all scans take precisely nine minutes. As such, throw out any crazy ideas to use this turntable to play your old 33 or 45 records.

Setting Up the Digitizer

MakerBot doesn’t include software with the device, instead it requires downloading the latest version from their website. This is a great choice, considering this technology is rapidly evolving. By forcing a free download, MakerBot can guarantee that users start out with the latest and greatest software. Once downloaded, click through the easy installation process.

After installing the MakerWare for Digitizer software, it’s time to set up the digitizer. Following the guide in the manual ensures the whole process is super easy. Basically unbox the device, set it on a stable surface, and hook up the power and USB cables. It doesn’t get much more straightforward than that.

Opening the MakerWare for Digitizer software the first time after the hardware is connected results in the app running an initial setup wizard. 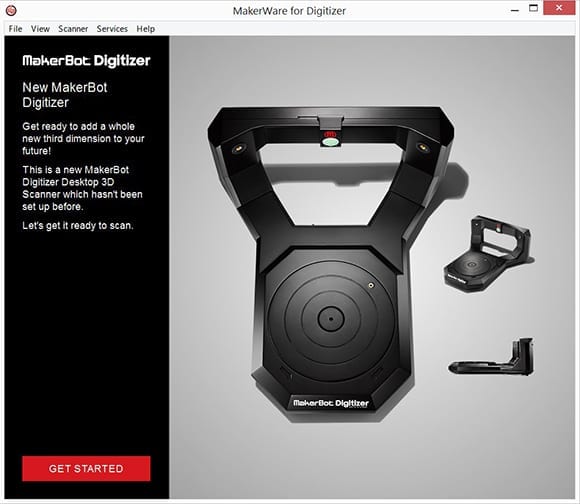 This is another fine example of how MakerWare really strives to simplify the process of getting their products up and running. I’m definitely impressed!

The wizard begins by providing guidance for setting up the scanner to be calibrated. Calibration is necessary in order to ensure the best quality 3D scans are produced. Calibration should be completed at initial setup as well as after every 20 scans or so. In addition, you should recalibrate if you move or bump the digitizer.

When preparing for calibration, make sure that the camera filter on the digitizer is in place over the camera lens. Try and position the digitizer so that the light in the room is coming from behind, not directly overhead or from in front of, the digitizer’s camera. The best room lighting for digitizing is normal to a little brighter than normal. Basically, avoid extremes. You know… avoid digitizing in a pitch black cave or on the beaches of a Caribbean island at midday.

MakerBot includes a handy calibration tool that is oriented on the digitizer differently during each stage of calibration. 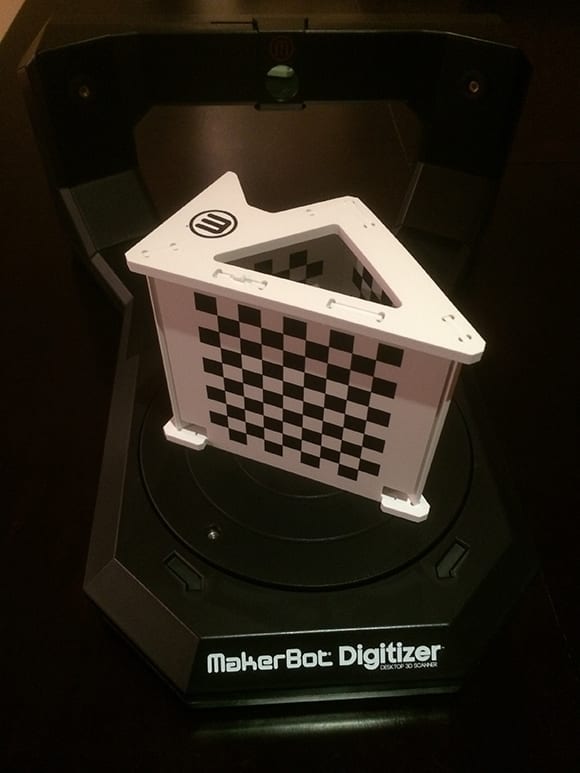 Orientation of the tool is indicated by letter markings, but there’s another key step in making sure the tool works properly. In the A and B orientations, there are small tabs that must be inserted into a hole in the center of the digitizer. Not doing so could result in poor calibration and thus poor digital scans.

While the digitizer is working, a progress indicator is displayed. Don’t bump or mess with the digitizer while calibrating. If calibration doesn’t work, the software will throw an error. In my experience, errors during calibration are either a result of the Digitizer being bumped or lighting that is too dim or too bright. 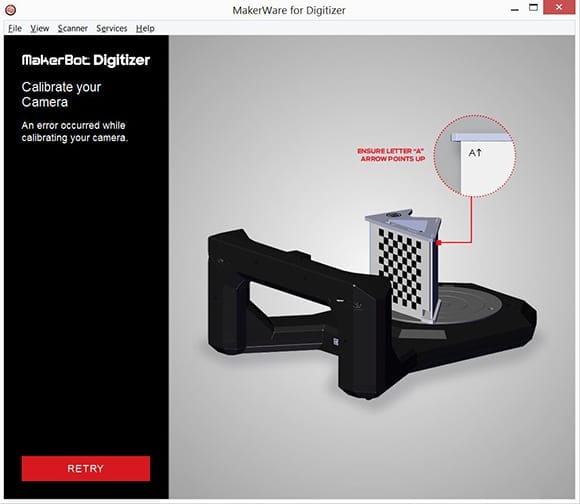 After adjusting lighting to normal levels and retrying camera calibration, a much happier message is displayed. 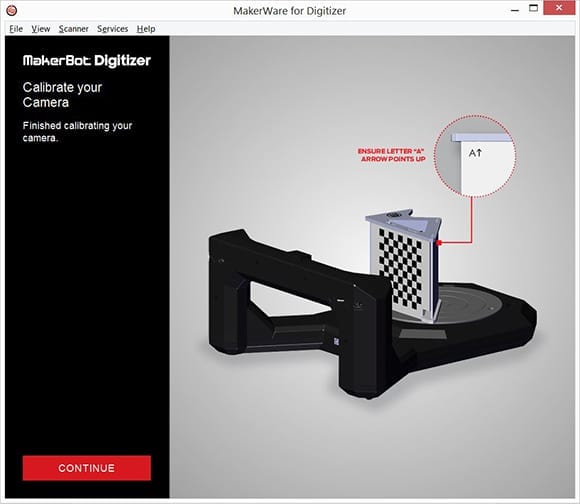 After the camera is calibrated, the system needs to calibrate the digitizer’s turntable. Simply adjust the tool so the letter B is pointed up, the tab is in the small hole in the center, and let the software do the rest. 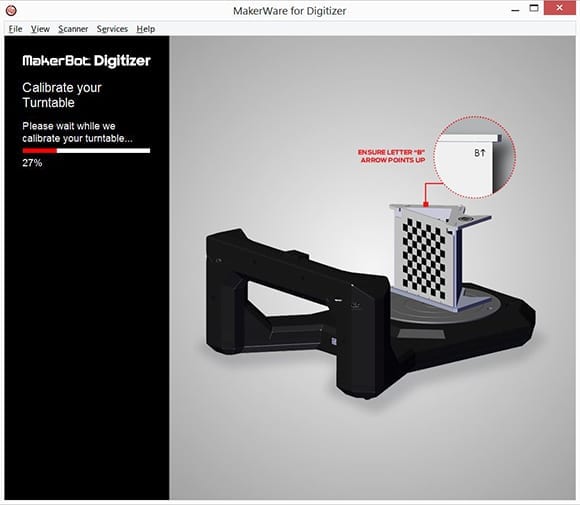 The final, and coolest, calibration step is for the digitizer’s lasers. Come on, admit it: anything with lasers is pretty cool. This step involves removing a panel from the calibration tool and then centering the tool on the Digitizer with the letter C facing up. There’s no tab to worry about during this step. 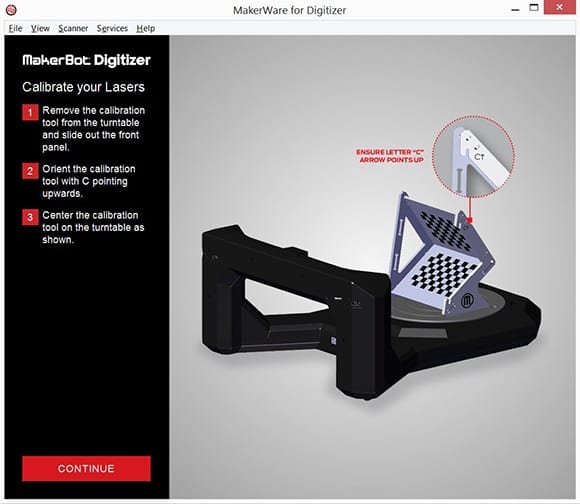 Now that calibration is complete, the system will prompt to set preferences such as a friendly name for the digitizer, credentials to Thingiverse, and if the software should automatically backup scans to your Thingiverse account. Once these are set, it’s time to digitize!

The digitizer is designed to scan objects that weigh less than 6.6 pounds and that can fit completely within an imaginary 8 inch by 8 inch cylinder. The digitizer is not designed to scan anvils or Buicks, or the like. Obviously, for an object to be scanned it has to first be placed on the turntable. I tend to center objects, but don’t worry, this isn’t a requirement. Just be sure the object doesn’t overhang off the turntable and it is stable. Next, verify the little red filter is slid into position over the camera. It’s fairly obvious when the filter is in place as the preview of the object in the software will be completely tinted red.

The only option in the scan dialog of the software is to select a description of the object’s appearance. Three options exist: Light, Medium, or Dark/Difficult to scan. 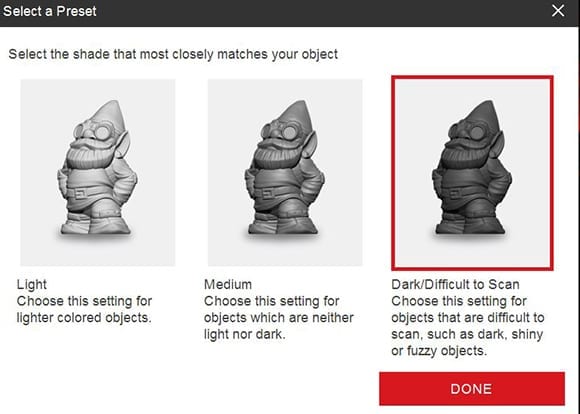 After the scan completes, MakerWare for Digitizer will launch a wizard providing guidance on utilizing the software’s MultiScan technology. MultiScan facilitates scanning an object from multiple angles and then combining that data into a single object. Scanning an object with a hole in the bottom is a perfect scenario where MultiScan is of benefit. Scan the object standing up and then again laying on its side. Both scans will be merged into a single object complete from top to bottom including the hidden hole. This technology is a great way to ensure the most complete and best quality scan of an object.

My test scan is a handcarved wooden head I picked up some years ago. It’s about six inches tall and has unique “hair” carved into the top. This feature makes the object perfect for testing the MultiScan functionality of the MakerWare for Digitizer software. I scanned the object once standing up, then once more laying on its back. MultiScan did a good job putting the data together and producing a final 3D model. 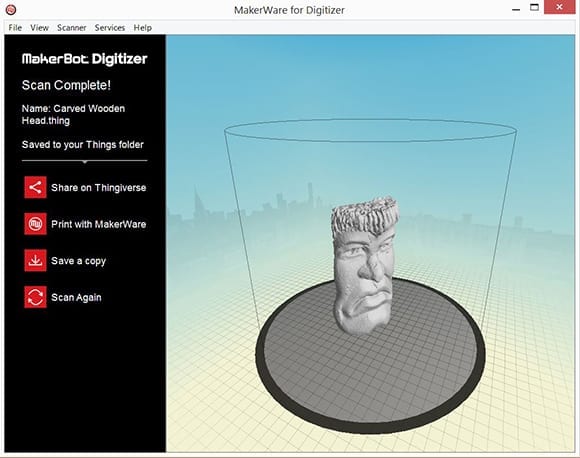 The only way to really compare the quality of the scan with the original is to 3D print the produced model. Firing up my MakerBot Replicator 2 and printing on Standard resolution produced a pretty good facsimile of my original wooden head. 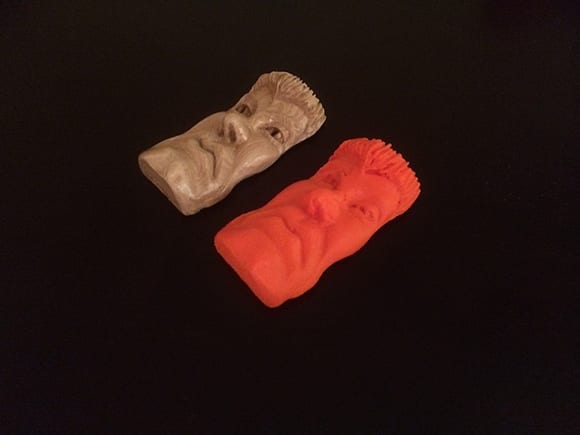 The original wooden head (left) and its 3D facsimile.

A few tips for making the most of the MakerBot Digitizer:

Tip #1: Realize that not every object can be scanned well. Dark, shiny, or fuzzy objects are difficult to scan. I’m not saying a stuffed animal won’t scan – I’m just saying to temper expectations.

Tip #2: Lighting is super important! The documentation doesn’t emphasize enough that lighting is the key to success. If the room is dim, there’s massive sun glare, or the lighting is coming from straight in front of the camera, my experience is that scanning will produce very poor results. Follow the lighting guidelines in the manual and make sure the room is well lit.

Tip #3: If the scan doesn’t turn out well and lighting isn’t the issue, then scan again with a different description preset. The different presets can produce significantly different results. For instance, the wood carving I scanned for this article didn’t do well on the Light or Medium presets because it’s coated with lacquer, which makes it shiny. I needed to scan using the Dark/Difficult to Scan preset in order to get good results.

Tip #4: Don’t let people, animals, or anything else move around in front of the camera’s view while scanning is in progress. Set it and forget it, but stay out of the way for nine minutes.

Overall, I’m happy with the MakerBot Digitizer and pleased with my purchase. 3D printing’s popularity is growing by leaps and bounds. The ability to reproduce existing objects without being a 3D software design expert only enhances the appeal. The MakerBot Digitizer jumps in to fill this niche. It doesn’t scan every object perfectly, but it does an admirable job in most cases. I’m pleased with my purchase and look forward to incremental improvements in new releases of the software. Now it’s time for me to get back to digitizing and printing all the goofy trinkets in my office!

Pros: Good construction, nice design, and easy to setup. The software is simple to use and scanning is fairly quick. The MultiScan technology does a good job filling in fine details found anywhere on an object.

Cons: No software tools for cleaning up scanned objects. Dark, shiny, and fuzzy objects can have difficulty scanning.

Bottom line: The MakerBot Digitizer is an exciting piece of tech with awesome potential. It will open up digital 3D scanning to the masses, although the $950 to $1,250 price tag will still keep it from appearing on every desk. Scan quality is good, but it will surely only continue to improve as newer software and firmware are released.