As was shown in the OSPF neighborship troubleshooting article earlier, there are a number of things that need to be configured correctly for everything to end up working as planned. This article takes a look at these requirements from the perspective of Enhanced Interior Gateway Routing Protocol (EIGRP) and shows the different commands that can be used to ensure proper EIGRP neighborship configuration and communications between devices.

From the perspective of EIGRP, there are a couple of things that must match for a EIGRP neighborship to establish; keep in mind that these are different from other routing protocols (like OSPF ), these include:

Starting from the top of the list, the interfaces connecting devices must be on the same autonomous system. To display the various commands and what to look for, Figure 1 shows a simple lab has been setup with two devices that are connected together via an Ethernet connection.

The first thing that is going to be checked by the EIGRP device is whether the remote device is in the same autonomous system. No other processing will occur on the device until both devices have been configured with the same area. The troubleshooting for this type of problem requires someone with access to the remote device; this is because there is no debug command that can be used that will show an obvious AS mismatch. The only way to confirm that this is the problem is to verify the configuration of the devices and verify the AS is the same on each. Figure 2 and 3 below show the EIGRP configuration on both R1 and R2; R2 has been configured with the incorrect AS (AS 1). 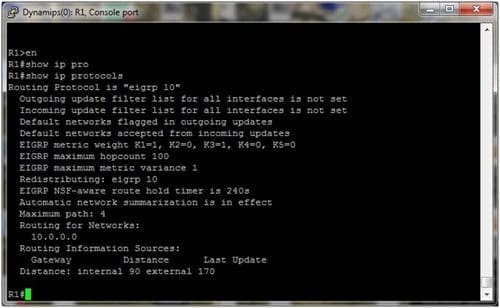 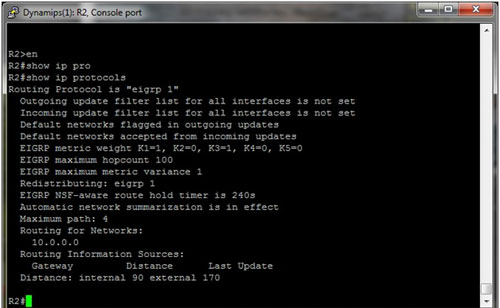 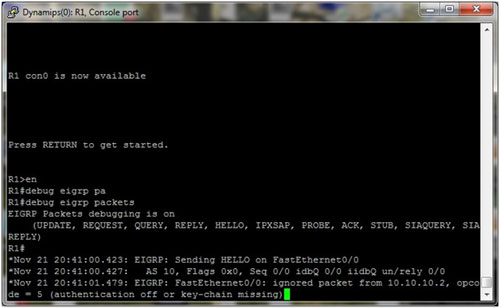 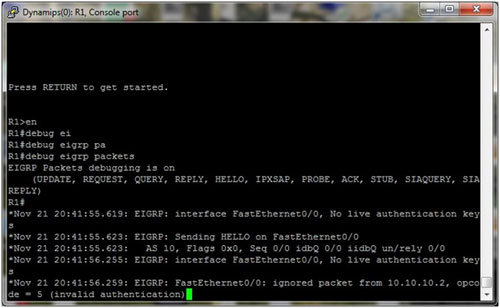 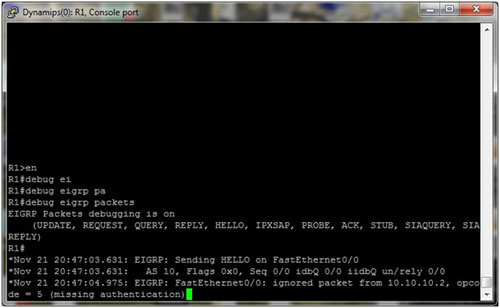 The message shown in Figure 7 is given when the remote device has EIGRP authentication configured but does not have a configuration that matched with the local configuration (commonly this is a key string mismatch). 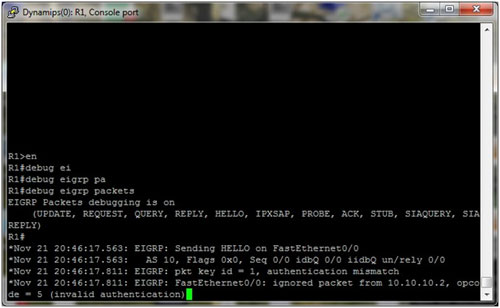 The final entry on the list was that the k-values must match between the communicating devices. Typically, the default values are not changed but if they are, each of the neighboring devices must share the same values. The message that is shown in Figure 8 is given if a mismatch is detected between EIGRP devices; no debug command is required for this message to be displayed. 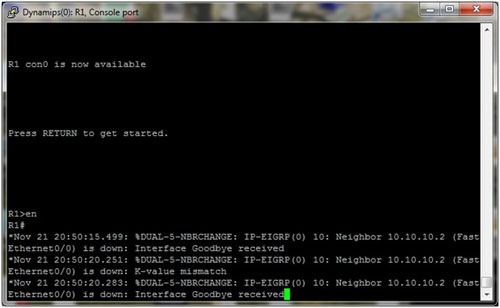 A neighborship is the first thing that must be established before any communication will happen between devices. Each of the different routing protocols has their own requirements that must be met before this neighborship will establish. This article takes a look at the elements that must match for EIGRP neighborships to establish and what commands to use to troubleshoot which misconfiguration potentially exists. Hopefully, the information in this article, when committed to memory, will help in future EIGRP configuration endeavors.