In a recent Petri IT Knowledgebase article, I explained what a VNet-to-VNet Virtual Private Network (VPN) connection was and why you might deploy one in Microsoft Azure. In this step-by-step guide, I’ll show you how to deploy a VNet-to-VNet VPN connection using two VNets in two different regions.

First I will explain my environment, and then I’ll show you how to create the VNet-to-VNet VPN connection. I have deployed two VNets in my Microsoft Azure subscription:

Each virtual network has one or more virtual subnets with the /24 subnet mask. I need to make sure that my VNets do not have overlapping IP addresses to allow routing, as a VPN connection will fail if they do overlap. I can also create site-to-site VPN connections from my on-premises network(s) to my connected VNets. I also need to avoid overlapping address ranges between the “sites” in this scenario.
I am going to connect the two VNets, which are in two different regions, together using a VNet-to-VNet VPN to enable routing between the two otherwise isolated virtual networks.

Name the local network something, such as “Temp”, and enter any random IP address as the VPN Device IP Address of this temporary network. On the second screen, enter a local IP address range of a network that you do not use.

The next step is to edit both of your virtual networks, one at a time. Open the properties of each virtual network, click Configure, and check the Connect To The Local Network box under Site-To-Site Connectivity. Save the change, and make sure that you repeat this action for the second VNet.
What you’ve done here is configured the VNet to allow connections from the network and VPN device IP address specified in the local network. Yes, it is a temporary local network, and we will fix that later when we have the gateway IP addresses of each VNet. 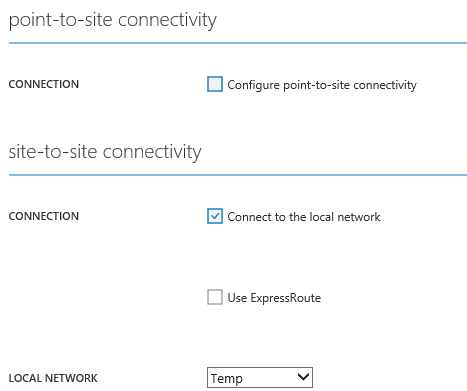 Once again you will be configuring both VNets. Navigate to each VNet and click Dashboard. In the bottom of the window, there’s a button called Create Gateway and choose Dynamic Routing. Click that button and wait. Actually, go have lunch now. At this point, a new subnet is being created within your VNet. And a gateway is being created to allow your VNet to have a virtual IP address that is publicly visible for VPN connections. In my experience, clicking Create Gateway runs a task that can take 15 to 20 minutes to finish.

Once completed, browse back to Dashboard in each VNet and record the Gateway IP address. Then double-check to ensure that you have recorded the network address of the VNet, which are listed in the portal as Address Space. You will need this information to create the required local networks for the final solution.

You are going to create two local networks. In my example, I created a local network called WestEurope1, which specified two pieces of information:

Fix up the Local Network Connections

Normally when we create a site-to-site VPN into a VNet, we will record the supplied unique Managed Shared Key from the VNet’s dashboard. This won’t work in this case because we need each VNet to use the same, not unique, shared key to authenticate the VPN connection.
You’ll need to come up with a nice long random key and save it in a secure location. Next, you’ll need to use Azure PowerShell.
I keep talking about PowerShell. Here’s yet another reason for you to join the rest of us in keeping our jobs.
PowerShell has a module that you can retrieve by using the Web Platform Installer. You will need to configure some kind of authentication to allow remote administration, which you can read more about on the Microsoft Azure website.
You will run two cmdlets to configure the shared key for each VNet. I ran the following cmdlets:

Now I should be able to deploy virtual machines within those VNets and have free and secured communications between the two regions.