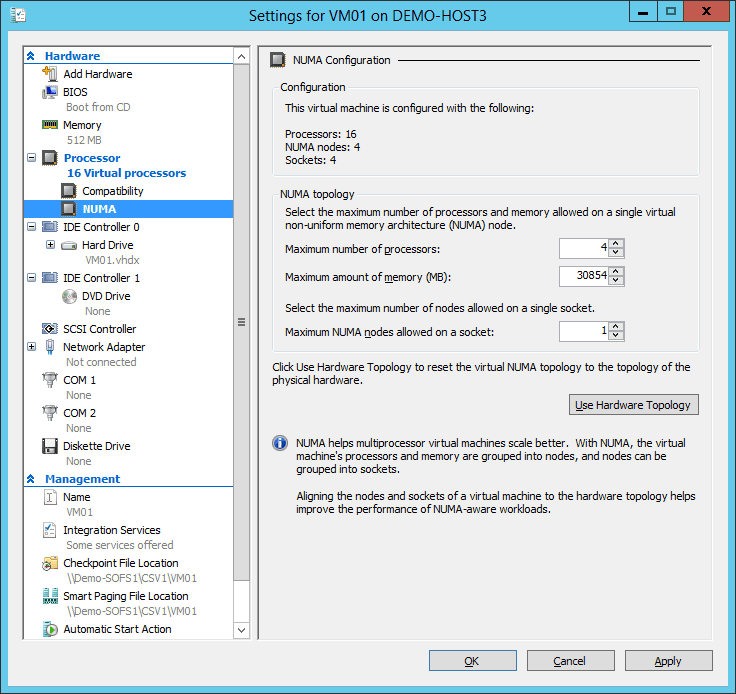 In this post I will show you how you can customize the virtual non-uniform memory access (NUMA) configuration of a virtual machine. You will rarely ever have to look at these advanced settings outside of an exam scenario. But there is a scenario in which you would tune these settings to optimize the performance of a virtual machine.

In a previous article, “What Is Non-Uniform Memory Access (NUMA)?” I introduced NUMA and showed how Hyper-V works with it. If your virtual machine does not use Dynamic Memory, then Hyper-V will reveal the physical NUMA architecture of the host that the virtual machine is occupying. This allows the guest OS (Windows or Linux) and NUMA-aware services (such as SQL Server) to optimize the assignment of virtual RAM with the processes running on the virtual processors (vCPUs).
For example, imagine you have a host with four 8-core processors without hyperthreading. That host would probably have a total of 32 logical processors (LPs), allowing you to run some pretty big virtual machines on Windows Server 2012 (or later) Hyper-V. The host probably has four NUMA nodes with eight cores each, one for each processor, and the RAM would be split up evenly between host nodes if you followed the server manufacturer’s best practices.

Change the NUMA Topology of a Virtual Machine 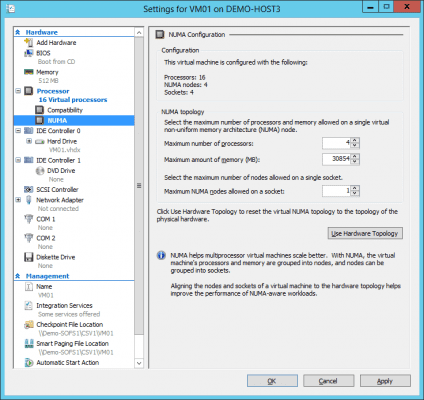 Editing the virtual NUMA of a virtual machine.

So what settings do you use? It would be a good idea to run the Get-VMHostNumaNode cmdlet on every specification of host that your large virtual machine could live migrate to. The results of that cmdlet will identify the smallest NUMA node configuration in your Hyper-V host farm. You can then customize your very-large virtual machine to suit that configuration so that it will never span a NUMA node as it live migrates around your data center.