The solution that we are going to use is based on a set of scripts and images that Microsoft has shared. We will download a PowerShell script called New-ContainerHost.ps1. This script will:

Note that New-ContainerHost.ps1 performs some things by default, and there are some things that it won’t do at all. For example, Docker is installed in the VM host, and the VM host is not connected to a virtual switch. You can modify this behavior by using some parameters when you execute the script:

Launch PowerShell with elevated privileges, navigate to where you want to save your container-related lab, and then run the following to download the New-ContainerHost.ps1 script. In the world of containers, you are going to get used to downloading files using wget:

If you want to get a new VM host with a default configuration, then you can run the New-ContainerHost.ps1 from a PowerShell prompt:

You will be prompted to agree some licensing terms from Microsoft; click Yes if you agree and want to continue.
If this is your first time running the script, then you’ll have a long wait as several gigabytes are downloaded. If you’ve run the script before, then after a a couple of minutes, you’ll have a brand new VM host waiting for you to log in.
Make sure you network the virtual machine:

I had a New-NetNAT error when I ran New-ContainerHost in my lab for the first time. I logged into the newly created virtual machine and found that the private NAT network that the containers would communicate on was 172.16.0.0/12. On the face of it that, this should be okay because:

I changed this value to a network address that did not overlap with my lab’s 172.16.0.0/16 network address. In the example below, I allow containers to use 192.168.250.0/24; this means that each new VM host will use this range as the private NAT network address. This doesn’t cause an issue, because it’s the same solution as just about every home and small business using 192.168.1.0/24 as their private network address. NAT on the VM host will redirect traffic on a specific port to that VM host to the appropriate container. 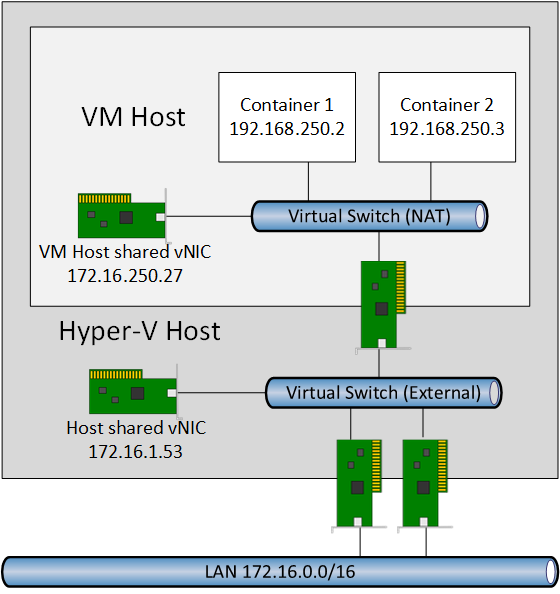 The networking of a VM host with a modified NAT network address (Image Credit: Aidan Finn)

Now my copy of Install-ContainerHost is used to create a new VM host. Note that I’ve been focusing on using PowerShell to create and manage containers, so I do not install Docker:

And to speed things up a bit, I also automate the connection to my Hyper-V host’s virtual switch: