I find it important to understand the basic makeup of an Azure virtual machine. Understanding the basics not only helps you understand how to design and price virtual machines, but the knowledge also lends itself to troubleshooting machines that go wrong. In this post, I’ll explain at a high level how a virtual machine is made up in Azure.

Understanding that Microsoft Azure is Hyper-V

The first thing to understand is that Azure is based on Windows Server 2012 Hyper-V, and no, I did not say Windows Server 2012 R2. Virtual machines in Azure are essentially the same as the ones you get with Hyper-V and aren’t that similar in concept as to what you get with vSphere.
If you understand Hyper-V, then some concepts will be familiar. For example, it’s required that any virtual machine running in Azure that will be a domain controller has a data disk to store the Active Directory database and SysVol; veteran Hyper-V administrators will be familiar with this advice from Microsoft.

If you’ve ever worked with a virtual machine with on-premises virtualization, then you will be familiar with the concept of virtual disks. 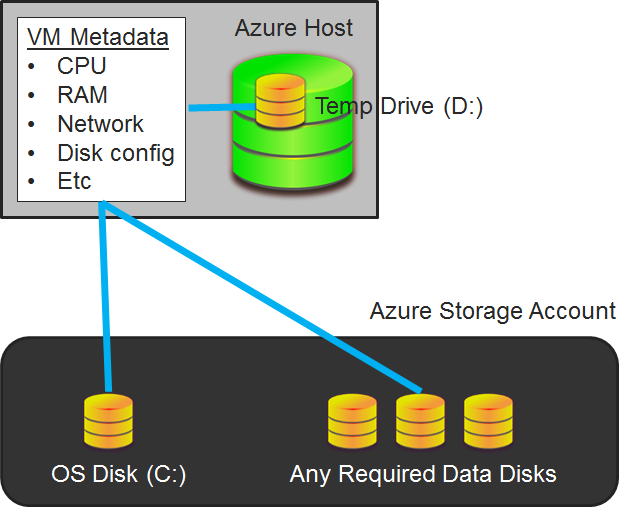 An Azure virtual machine is made up of metadata and virtual hard disks (Image Credit: Aidan Finn)

Instead of physical disks, which then make LUNs, a virtual machine uses virtual hard disks. In the world of Hyper-V, we have VHD and VHDX formats that  can be either fixed-size, dynamic, or differential. Azure supports only fixed-size VHD format disks.
Note that dynamic disks are converted if you upload them manually from Hyper-V, and Azure Site Recovery converts VHDX to VHD on the fly during replication.
A virtual machine always has an OS disk. In the case of Windows, that’s the C: drive. Any virtual machine that you deploy from the Azure Marketplace will have a 127 GB C: drive – this is despite the pricing Azure virtual machine pages incorrectly stating that a Basic A2 has a 135 GB disk (I’ll explain that soon). Remember: any virtual machine deployed from the Azure Marketplace has a 127 GB OS drive.
The OS disk of the virtual machine is stored on either Standard Standard (all series of virtual machines) or Premium Storage (DS- or GS-Series). If you want to visualize it, think of this as being like storing the disks of a virtual machine on a SAN. In fact, there are no SANs in Azure; instead, commodity hardware is deployed using software-defined storage, and it plays the role of storage that is shared between Hyper-V nodes in Azure.

There are two primary costs to a virtual machine in Azure: