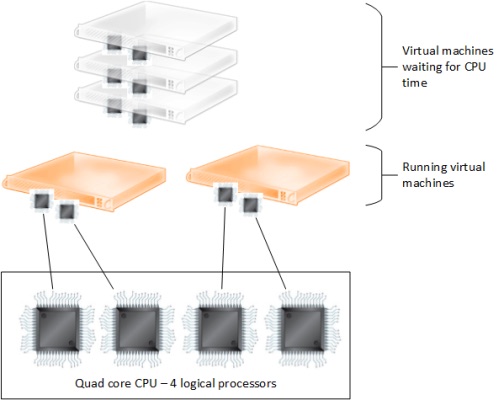 I was reviewing older posts on the Petri IT Knowledgebase when I noticed an article called Virtual Processor Limitations in Hyper-V. It occurred to me that I should write an updated post that covers a few related topics. In this article, I will clear up a few myths about Microsoft guidance and talk about support virtual processor maximums in Hyper-V.

Consider a physical computer for a moment. This machine has one or more CPUs or sockets. Each CPU has a number of cores. Most Intel desktop or server processors feature something called hyper threading. This is a design that improves parallelization, enabling a single core to process two threads of execution at once. This isn’t truly a doubling of processing horsepower, but it does improve capacity when using modern software on a modern processor. In virtualization, it is important to understand how many logical processors a host has. If you have an AMD 8-core CPU, then that CPU has 8 logical processors (LPs). If you have an Intel 8-core CPU, then it will have 8 LPs if hyper threading is disabled and 16 LPs is hyper threading is disabled.
Each virtual machine you create also has one or more single-core virtual processors. Each virtual processor executes on a host’s LPs. What does this mean? If a host has 16 LPs, then the most number of virtual processors (vCPUs) that can be executing on the host hardware at once is 16. I’ve tried to use precise wording here because there is a subtlety; I can actually overcommit my processors by having lots more virtual machines in a running state. The hypervisor will swap virtual machines in and out on the physical processors based on demand and resource control.
Let’s make this clear with a few examples.

An example of overcommitment of processors to virtual machines. (Image Credit: Aidan Finn)

That might sounds scary if you’re new to virtualization, but we’ve been doing that sort of thing for decades with software, and it’s been the norm for the last 10+ years of machine virtualization.

There are four factors to consider:

Microsoft does not have and never has had a general rule of having one LP per vCPU. However, some products from Microsoft have issued support guidance. Some products will support 2 vCPUs per LP, and some want a 1:1 assignment. This is a per-product guidance and affects only those virtual machines running those products. You can use Resource Control to enforce this guidance.
Another best practice is to not go crazy with assigning vCPUs. The MSDN Performance Tuning Guidelines for Windows Server 2012 R2 advises that you should only assign enough vCPUs to a virtual machine to meet the needs of that machine’s services. Wastefully assigning vCPUs will reduce the performance of the host and other virtual machines. 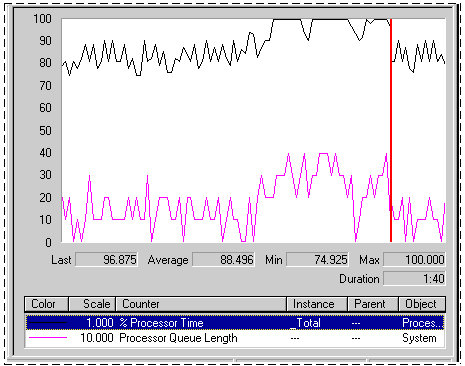 A related tip is to monitor the processor queue length within the guest operating systems of your virtual machines, especially mutli-threaded ones such as those running SQL Server. If this metric rises beyond acceptable levels then assign more virtual CPUs to the virtual machine.