3 Ways to Make the Most Out of Keeping Windows XP 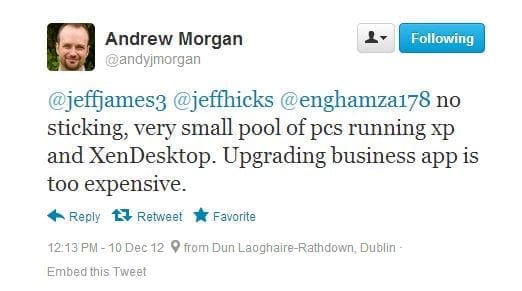 Released in 2001, Windows XP will undoubtedly go down in history as one of the IT industry’s most successful and widely-adopted operating systems. Even today, a significant minority of IT shops are still using Windows XP and even may stick with the OS when Microsoft support for the OS expires in April 2014 — and beyond.

Granted, the decision to stick with Windows XP does come with a variety of risks. It’s clear that Windows 7 (and Windows 8) are superior to Windows XP in many areas — including vastly enhanced security features — that make adopting those newer OSes an easy decision for many IT departments. But many IT departments are deciding to stick with Windows XP for three primary reasons: The expense of upgrading, compatibility problems related to legacy apps that require Internet Explorer 6, and an assessment that Windows XP is still “good enough” for most office tasks.

A number of companies have stepped in to provide products that can help with the migration of legacy applications bound to IE6 or IE7 and Windows XP, including Browsium Ion. Yet many companies are reluctant to spend any more money on a legacy application to enable an effective migration, a situation that infrastructure architect Andrew Morgan has had to contend with.

Morgan told me via Twitter that a client’s decision to stick with Windows XP for a small number of PCs was driven primarily by a large, expensive application that required IE6 to operate. “[It’s a] large business app, more expensive to upgrade then migrate to a new app,” Morgan Tweeted. “[The] app must be maintained for the foreseeable [future].” The customer didn’t want to sink any more money into what it considered a “dead platform,” so the legacy application remains on Windows XP.

Make the Most of Keeping Windows XP

So if you’re one of the many IT professionals that are considering keeping Windows XP for as long as possible, here are some pointers for getting the most out of that decision.

1. Keep Windows XP Antivirus Software current
Windows 7 and Windows 8 have a number of important security improvements over Windows XP, including BitLocker, picture password (in Windows 8), and dozens (if not hundreds) of other architectural improvements that make those OSes much more resilient and hardened against security risks. That’s why it’s doubly important to pay special attention to your security infrastructure and your anti-virus software if you’re planning to stay with Windows XP. Malware and virus writers have been diligently working on exploits to vulnerabilities in Windows XP for more than a decade, and keeping your firewalls and other security services and platforms updated, patched, well-maintained, and monitored is one way to make your extended tenure with Windows XP more enjoyable.

Is your IT department planning to keep Windows XP? If so, drop me an email with some of the reasons why you’re planning to stick with it.