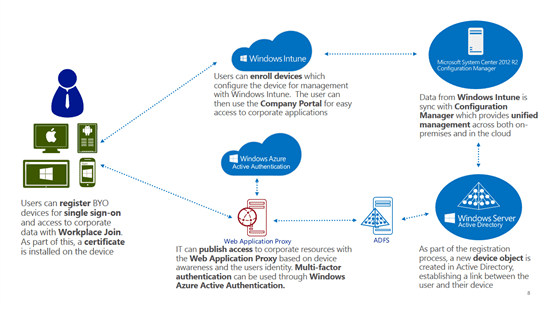 With a continued emphasis on delivering scenario based solutions focused on addressing the primary challenges we face on a daily basis as IT pros, the latest Windows Intune update — roughly aligned with the R2 updates of System Center 2012 and Windows Server 2012 — includes a number of new features and improvements, with many of them focused on closer integration with Windows Server 2012 R2 and System Center 2012 R2, which also have new features that integrate with Windows Intune.

Before we dive into what these are, I do want to highlight the fact that most of these additions and improvements are scenario based, which means that the true potential of the offering can only be realized when the supporting components are deployed and available.

The first of the enablers is enhanced support for Windows Intune in Windows Server 2012 R2. Investments in areas like Active Directory have a very specific focus on enabling organisations to deliver the foundation infrastructure for “bring your own device” (BYOD) offerings. There are currently three major new capabilities offered in Server 2012 R2 OS that relate to Intune, including:

Each of these technologies deserves and will receive a much greater in-depth coverage in future posts.

The second of the enablers are the updates to the Configuration Manager component in System Center 2012 R2. Investments in this product for the Intune scenarios are more of an incremental improvement approach. The first of these additions in this release is the added support for both deploying and managing Windows 8.1 and Windows Server 2012 R2 endpoints. Although, there is also a hidden cost, specifically if you are still deploying XP (which I really hope is not the case),then you should be aware that OS deployment for Windows XP has been depreciated. Additional enhancements are primarily focused to the deployment areas, for example, we now gain the ability to distribute links to web applications. However, in my opinion, one of the feature gaps in both Windows Group Policy and Configuration Manager has also being finally addressed with the ability to finally deploy VPN Profiles, AMEN! Extending on this profile investment, support is now also included to distribute both WiFi profiles and Certificates, both of which are priceless when it comes to managing clients in non-domain joined situations.

There are many, many more investments in both products, but for the focus of Intune, those are the main investment points which are of immediate concern. All these combined investments fall under a single pillar of support in the R2 cycle, namely “People Centric IT!” What exactly does this mean? That’s actually quite simple really, the investment focus can be described in a single sentence “Enabling employees to choose the devices which they want to use for their jobs!”, Which finally leads us to the answer to our question “What’s new in Intune?”.  Microsoft had three objectives for this latest round on Intune updates, including:

Simplifying these into real world actions quickly clarifies what we get in Intune R2, and also highlights the investments in Windows Server 2012 R2 and Configuration Manager 2012 R2:

We have a lot of material to cover, so look for more information in future blog posts.