Windows 10 Business Adoption Rate Nearly Doubles Windows 8, But Is That Any Good?

There are few who will argue anything to the contrary that Windows 8 was a disaster for Microsoft. The OS failed to gain traction with consumers and corporations, and the company quickly tried to distance itself from the operating system with Windows 10.

A new report from Spiceworks dives deep into the adoption rate of the operating system and compares it to Windows 8. Looking at the adoption rate after six months, Windows 10, among companies surveyed, is seeing about 18 percent penetration compared to Windows 8’s 9.3 percent adoption rate for the same time period. While Windows 7 is the juggernaut today, remember that it was released when Windows XP was king and thus, had a much slower adoption rate until much later in its lifecycle. 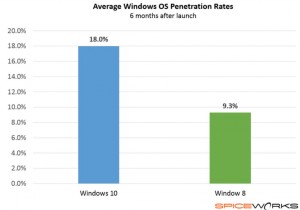 Typically seeing that an OS is outperforming its predecessor during the same time period is a good thing and in this case, that certainly is true. But Windows 8 was not well received by many, so being twice as good as something that did poorly, doesn’t always mean that Windows 10 is a huge success.

Microsoft has touted that they have 200 million devices running the OS and Windows 10 reached this goal much faster than Windows 7 or 8. Then again, for the consumer, the OS is free, which means that if Windows 10 lagged behind with adoption, it would be a serious issue for the company.

So, is nearly two times the adoption rate of Windows 8 a good thing for Windows 10? Yes, it is. Considering that the company is rebuilding its image with consumers and proving to its corporate clients that there’s life after Windows 7, seeing a strong uptick with Windows 10 is encouraging.

It’s worth noting that the report from Spiceworks does not fully detail their sample size, which means that the two times figure is subject to scrutiny. But, aside from Microsoft, this is the only look we have seen so far that gives new data points about the adoption of the platform from an independent source.