Microsoft released Windows 10 a little over a year ago, and the OS has quickly been adopted by users around the world. While the company said that there are over 350 million users of the operating system, that figure was released back in June and there are likely many millions more using the OS today, it’s the last known hard number of how many users of the OS are out in the real world but using third-party sources, we can get a slightly better look at the bigger picture.

According to Net Marketshare, Windows 10 during the month of August accounted for 22.99% (21.13% for July) of machines connected to the web that it was able to survey. During the same period, Windows 7 still commanded the lead with 47.25% which is a small gain over July 2015 which had 47.01% of the market. Of course, it should be noted that small gains or losses should not be scrutinized significantly as this data is a sample of the market as it is impossible to survey every machine connected to the Internet. 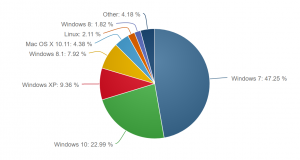 With Microsoft ending the free upgrade promotion for Windows 10, the adoption rate of the OS will likely slow, but the company is hoping to lure enterprise customers with a new subscription service that starts at $7 a month. Following on the success of Office 365, the company is hoping that Windows 10, for enterprise customers, will be a new subscription service that provides a lower upfront payment for its user but a longer cash flow tail for the bottom line.

One of the primary drivers for the adoption of the OS will be new hardware. With Windows 10 being the platform shipped on most of the new hardware rolling out from OEMs and the fact that new Intel and AMD chips don’t support Windows 7, Windows 10 should continue to see market share gains for the months and years ahead as Windows 7 slowly winds down.