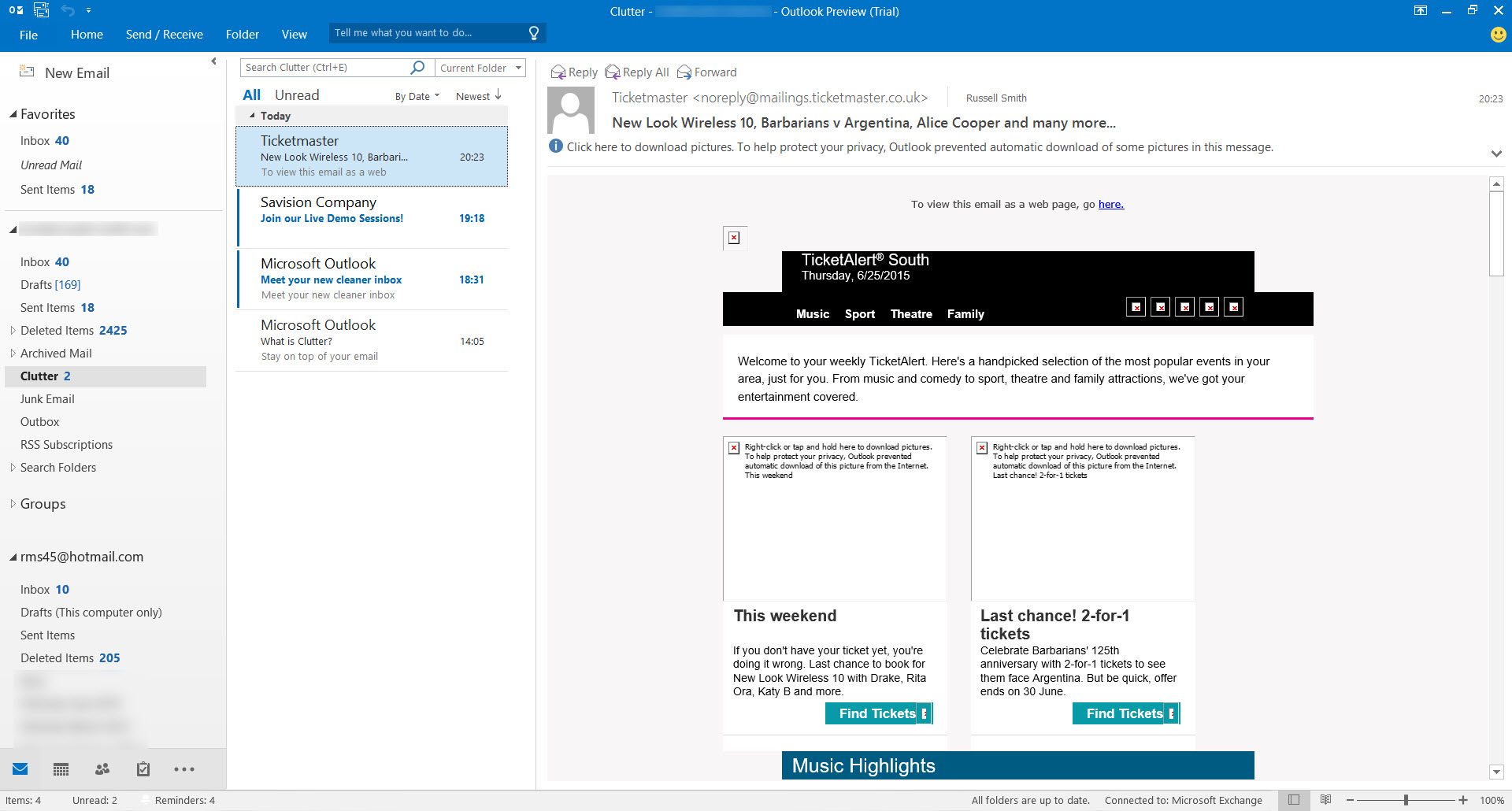 I’ve never been a big fan of Outlook, the messaging application that office workers up and down the land are most likely familiar with. The past two major releases, in 2010 and 2013, added some welcome enhancements, however nothing revolutionary.

But my initial experience with Outlook 2016 leads me to think that Outlook has finally come of age, and in this article, I’ll walk you through some of my favorite changes and new features.

A friend of mine recently gasped as I fired up Outlook 2013 to send an email from my notebook, exclaiming that nobody uses that anymore. Having already been quizzed as to why I use Internet Explorer, and now Project Spartan (Edge) in preference to Chrome, the Outlook revelation might have been too much for his health. For a long time, I used the Windows 8.1 Mail app and briefly flirted with Outlook.com, but I always find myself coming back to the Outlook desktop app, because when it comes to managing messages in bulk, you just can’t beat the desktop application.

But having said that, Outlook 2013 is slow to start up, clunky, and most problematic of all, it has a cluttered user interface, which in the days of clean and beautiful mobile messaging apps, makes Outlook appear to be something from the dark ages. And the reason I’m choosing to write about Outlook, as opposed to Word or Excel, is because for once I think I can safely say Outlook is the application that has improved the most in Office 2016.

Outlook 2016 makes a good first impression with much faster start-up times, and finally all the complexity has been restructured to present users with a streamlined interface, two issues that needed to be addressed long ago. I could stop writing here, because that would have been enough to make me upgrade, but there’s a lot more to this release as well.

Groups are a relatively new feature in Office 365, and in many ways are a replacement for Exchange distribution lists and public folders, helping tie together content from across Office 365, and make collaboration with ad-hoc teams easier. Office 365 Groups are currently only supported in the web-based mail app, and Outlook 2016, and more functionality will be added during 2015, including the ability to add users that are external to your Office 365 tenant. For more information on Groups, see New Features in Office 365 Groups on the Petri IT Knowledgebase.

The Junk Email folder has been around for years, but Microsoft has recently added the Clutter folder to Outlook.com for Office 365 users, and in Outlook 2016 on the desktop. When you upgrade to Outlook 2016, assuming you have an Office 365 account set up, you receive an email offering more information about the feature, and a link that enables the it in the Office 365 management portal, as it’s currently an opt-in feature. 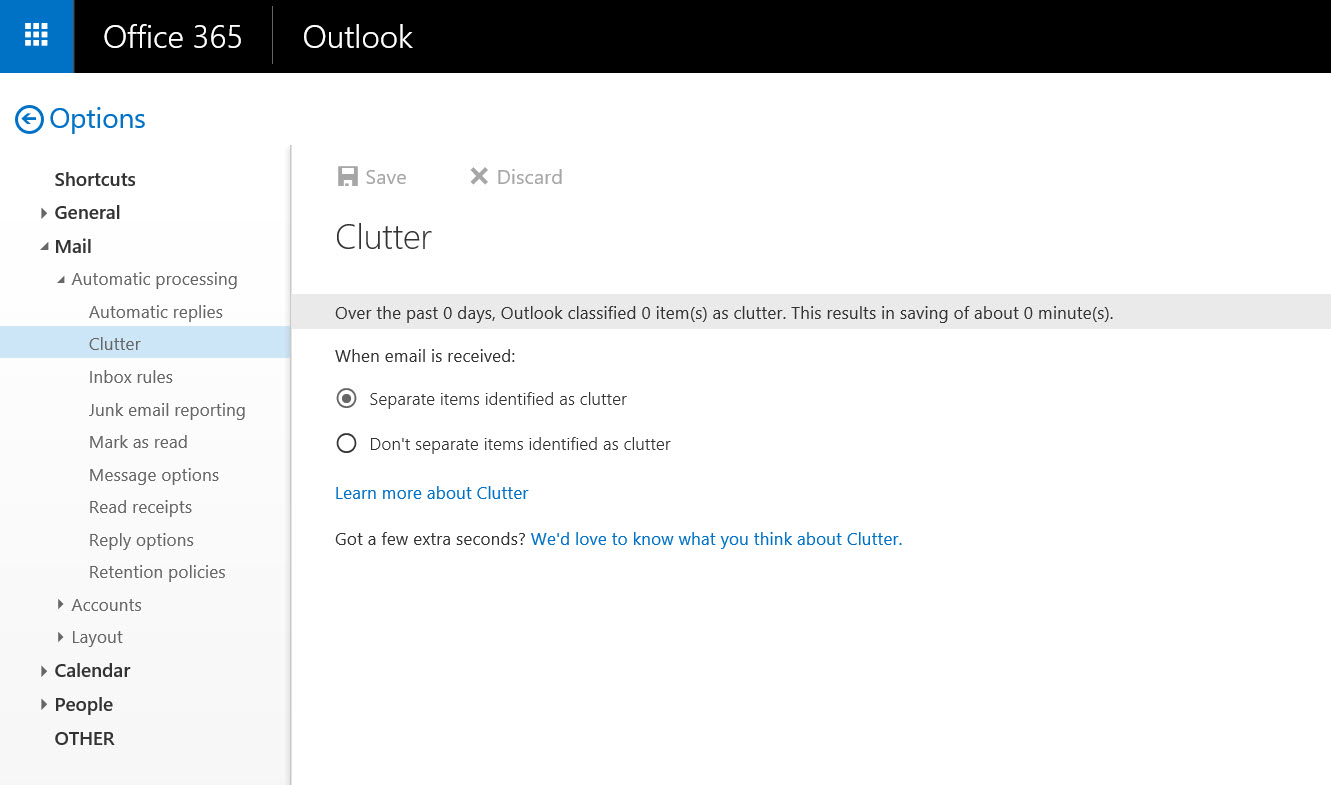 Clutter differs from Junk mail in that it uses machine learning to determine which messages are likely to be low priority, based on your behavior. Naturally, you can also inspect the contents of the Clutter folder periodically and move items back to the inbox, where Clutter learns what’s important and what isn’t from these actions, too.

We all face a great deal of noise in the daily bombardment of information, so if Clutter is effective, it’s a welcome addition to Outlook. For more detailed information, see Declutter Your Inbox with Office 365 Clutter Enhancements on Petri.

It may not seem an important issue in the scheme of things, but email is still popular for sharing files with team members, partners and customers, and access to cloud storage — namely OneDrive, OneDrive for Business, and SharePoint Online – has improved significantly across the entire Office 2016 suite. Finally saving files to the cloud really means doing just that, and Office will always use your cloud storage as the primary source of truth. If there’s a local offline version of the file, it will only be used when there’s no Internet access or to speed up loading if the server version hasn’t been modified. 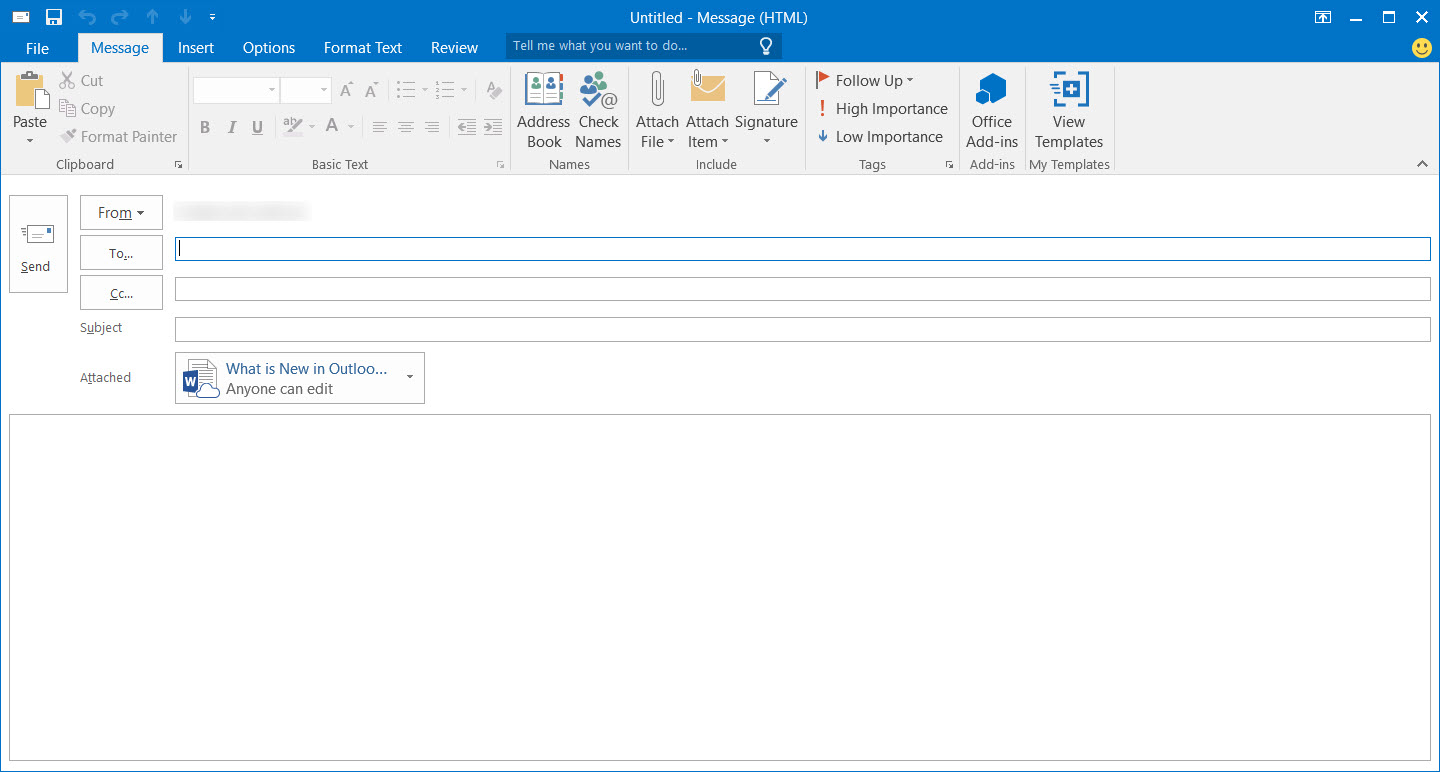 There have always been multiple ways to add attachments to emails, but there are two important changes to this process in Outlook 2016. The first is that if you click to add an attachment when composing an email, you are presented with a list of recently accessed files, as most likely you want to send a document you’ve been working on just prior to sending the email; no more having to browse for the file.

Secondly and by default, if you attach files from OneDrive, emails are sent as shared links, which the recipient can use to view or edit the document, depending on the permissions set when sending. Why is this important? Because it means we are no longer sending actual files that clog up our mailboxes, but links to documents that can be viewed and edited using SharePoint, a much more efficient way of working. Microsoft refers to this as Modern Attachments, but naturally you can still send the actual file if you need to.

Along with the rest of the Office 2016 suite applications, Outlook 2016 includes Smart Lookup, which is essentially Bing integration as a research tool. Time will tell whether this is something I would use personally, as Bing tends not to return results as relevant as Google, especially when searching for technical and IT related information.

There are lots of technical changes that improve performance in Outlook 2016. All the Office 2016 desktop apps now support Active Directory Authentication Library (ADAL), which should eliminate the need for Basic Authentication in Outlook, add support for multi-factor authentication, and provide true single sign-on capability across all the apps for the first time. It’s worth noting, that Microsoft is planning to add ADAL support to Office 2013 at some point in the future. Some of the other improvements include:

If you’d like to try the Outlook 2016 Preview or any other Office 2016 suite applications, you can download a trial version of the software from Microsoft. Remember that Office 2016 is in preview and is not recommend for production PCs.