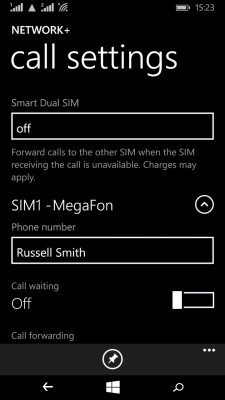 In this Ask the Admin, I’ll explain how dual-SIM functionality works in Microsoft’s new Lumia 640 handset and how to configure the Smart Dual SIM feature using Network+.

Smartphones equipped with slots for a second SIM card are becoming more common in Europe and developing countries. There a couple of different ways that dual-SIM slots can be implemented and support must also be baked into the phone’s operating system. If you read Microsoft Lumia 640 Review on the Petri IT Knowledgebase, then you’ll know that I recently bought a Lumia 640, and now that I’m on the road again, I’ve added a second SIM card. But I was intrigued to find out a little more about how the technology works.

My first concern was whether adding a second SIM would considerably impact battery life, so I needed to find out more about dual active and dual standby configurations. The Lumia 640 has a single radio, making it a dual standby SIM handset, meaning that when you receive a call on one network, a caller dialling the number of the other SIM will get a busy signal.

To overcome some of the limitations of the dual standby configuration in Lumia phones, Windows Phone 8.1 has a feature called Smart Dual SIM, which allows call forwarding to be configured so that when one SIM is active, calls received on the other are not missed. This can be configured from SIM 1 to SIM 2, SIM 2 to SIM 1, or be bi-directional. Just remember that call forwarding can incur operator charges, especially when one of the SIMs is roaming.

When a second SIM is inserted into your Lumia, a notification appears in the Action Center to configure Smart Dual SIM. You can choose to ignore this, it’s not a necessity to configure the feature to use the second SIM. However if you do want to set up Smart Dual SIM, all you need to do is choose one of the following options from the menu:

You’ll then be prompted to enter the numbers associated with both SIMs, and Smart Dual SIM will automatically set up call forwarding. Alternatively, you can manually configure call forwarding and call waiting options for each SIM individually.

At any time, either SIM slot can be switched off, so there’s no need to physically remove a SIM to stop using it. Calls and messages are represented by default by four separate live tiles on the Start screen, although it’s possible to combine them if you wish.

When composing or replying to a message, you can select on which network the message is sent. So it’s no problem to reply to a message received on SIM1 using SIM2, very handy when roaming. Contacts can also be set up with a default SIM, therefore you don’t have to manually choose the network each time you call or send a message.