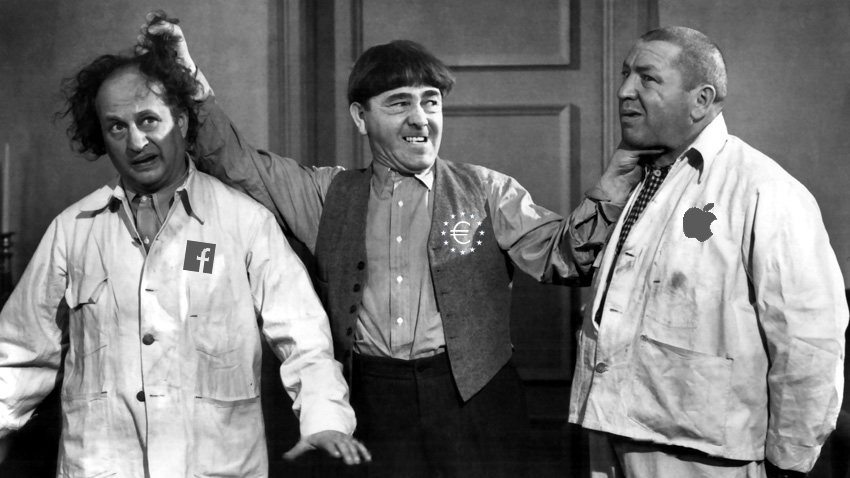 Because “Linux user” is perhaps the ultimate personal technology oxymoron, this week’s other news includes the scary possibility of Microsoft open-sourcing Linux, the continued success of Windows XP one year after its death, the EU’s problem with US technology giants, the reality of Android malware, and a missed opportunity for Microsoft goes to Sony.

If you weren’t already burned by “mobile first, cloud first,” well, this should singe some feathers. In an interview with Wired, Microsoft technical fellow Mark Russinovich said that given “the new Microsoft,” an open source version of Windows is—wait for it—”definitely possible.” OK. Breathe with me people. You OK? Just touch your toes there. OK. As it turns out, this isn’t going to happen anytime soon if it even happens at all, thanks in part to the ancient and complex system Microsoft uses to actually build Windows. (It “takes rocket scientists and three months to set up,” Russinovich says in what I assume is a slight exaggeration to make the point.) But … Windows is so yesterday, Wired explains, and “the future, even for Microsoft, lies in selling other stuff, including cloud computing services such Microsoft Azure and all sorts of other apps and services that run atop the world’s operating systems.” I don’t really think that open sourcing Windows would solve a real world problem for Microsoft, unless things get so bad that updating and maintaining Windows becomes more of a burden than a benefit. But then that’s a little dystopian future to consider if you’re not already freaked.

Samsung is taking the Apple copying to new levels, I see.

Windows XP is like a Timex watch zombie something

Windows XP hasn’t been supported for about a year now. Despite this beating, the zombie OS continues to keep going, and according to the latest OS usage share numbers from NetMarketShare, Windows XP usage—18.6 percent of all versions of Windows—still exceeds that of Windows 8 and 8.1 combined (14 percent)! This says a lot, both about the enduring popularity of XP, which simply will not die, and about the epic user hatred of Windows 8, which simply isn’t growing usage at all. If you were wondering why Windows 10 is so important, wonder no more. It’s for both of those reasons. Plus Windows 7, which at about 57 percent usage despite being 6 years old, is still more popular than XP, Windows 8 and Windows 8.1 combined.

“As it turns 40, Microsoft still has some surprises left”

Looks like the EU isn’t just going after Google

If you were excited by the prospect of the EU taking down Google in an epic antitrust battle, well, pull up a seat, we’re going to be here a while. It turns out that Google may just be the opening act. According to various reports, EU’s antitrust officials are also taking a hard look at both Apple and Facebook too. And each could spin off into its own massive courtroom drama, resulting in harsh behavioral curbs and fines for all of them. The fledgling Apple investigation involves the consumer electronic giant’s plans to merge iTunes Radio and Beats Music into yet another music service, one that is allegedly trying to leverage Apple’s dominance by cutting other music services out of certain artists and albums. (So easy to imagine, right?) And Facebook’s issue is … Oh, come on. We all know what Facebook’s issue is.

Only Apple fans would be happy with an expensive new Mac that is barely as good as their four-year-old Mac.

About that Android malware problem

As you might imagine, Google is eager to counter the recent spate of news about Android malware, in part because much of it comes from apps it approved for distribution through the Google Play Store, and in part because, you know, Android is the new Windows. But the online search giant is now claiming that less than 1 percent of Android devices actually installed harmful apps last year, and that most of those issues were caused by apps installed from outside Google Play. (Less than 0.15 percent of malware came through Google Play Store, according to Google.) I’m not sure what to think of this data, but I’m not surprised to discover that most of the issues seem to come from Russia and China, and that when you exclude these countries, the issues largely disappear. So Android really is the new Windows.

“How Smartphone Dependent are Americans?”

Every time I watch someone walk into a lamp post or obnoxiously watch a video at full volume without earphones on, I know the answer to this question, which is: overly.

A couple of years ago, a new online service called OnLive emerged, promising to put the processing power required for high-quality video gaming in the cloud, allowing us to access these games from inexpensive set-top boxes (rather than consoles), tablets, and other devices. OnLive was seen as a major threat to then-coming new consoles like Xbox One and PS4, but it never really took off with consumers. The thing is, the idea is solid, and while Microsoft is incorporating elements to this approach to Xbox Live—thanks to its Azure back-end cloud infrastructure—Sony has nothing like this. Which explains why Sony just acquired OnLive for an undisclosed sum. What this doesn’t explain is why Microsoft didn’t buy OnLive for “an undisclosed sum plus one dollar,” if only to keep Sony further behind in this area. This would have been a much better buy than Microsoft’s Minecraft purchase, which gives them nothing more than a nice little brand for its $2.5 billion. Oh well.

If you don’t know, why would I read your web site?”

“Can Linux learn anything from Windows 10?”