The Surface Pro 3 is arguably the first successful tablet in the Surface family. The device, with its larger display, improved typing experience and pen were a hit with consumers and corporations but after more than a year on the market, Microsoft has announced its successor.

The Surface Pro 4, which Microsoft unveiled at its event in New York City earlier this month, is exactly what you would expect as a follow-up to the Surface Pro 3. It’s certainly an evolutionary update, unlike the Surface Book, which is going more for the revolutionary introduction and includes a slightly larger display (12.3inches) with a higher resolution ( 2736×1824), an updated pen and a refined Type cover. The Pro 4 improves upon the Pro 3 in nearly every way.

The silicon under the glass has been updated and Microsoft is dropping the Intel Core i3 option and is instead starting with a fanless Core M chip, 4GB of RAM and 128 GB of storage for $899 and the options top out with an i7, 1TB of storage and 16GB of RAM for $2699.

If you do opt for the high-end Surface, i7 model only, you will get Intel’s Iris graphics chip as opposed to the Intel HD 520 graphics for the i5 and HD graphics 515 for the m3 version. 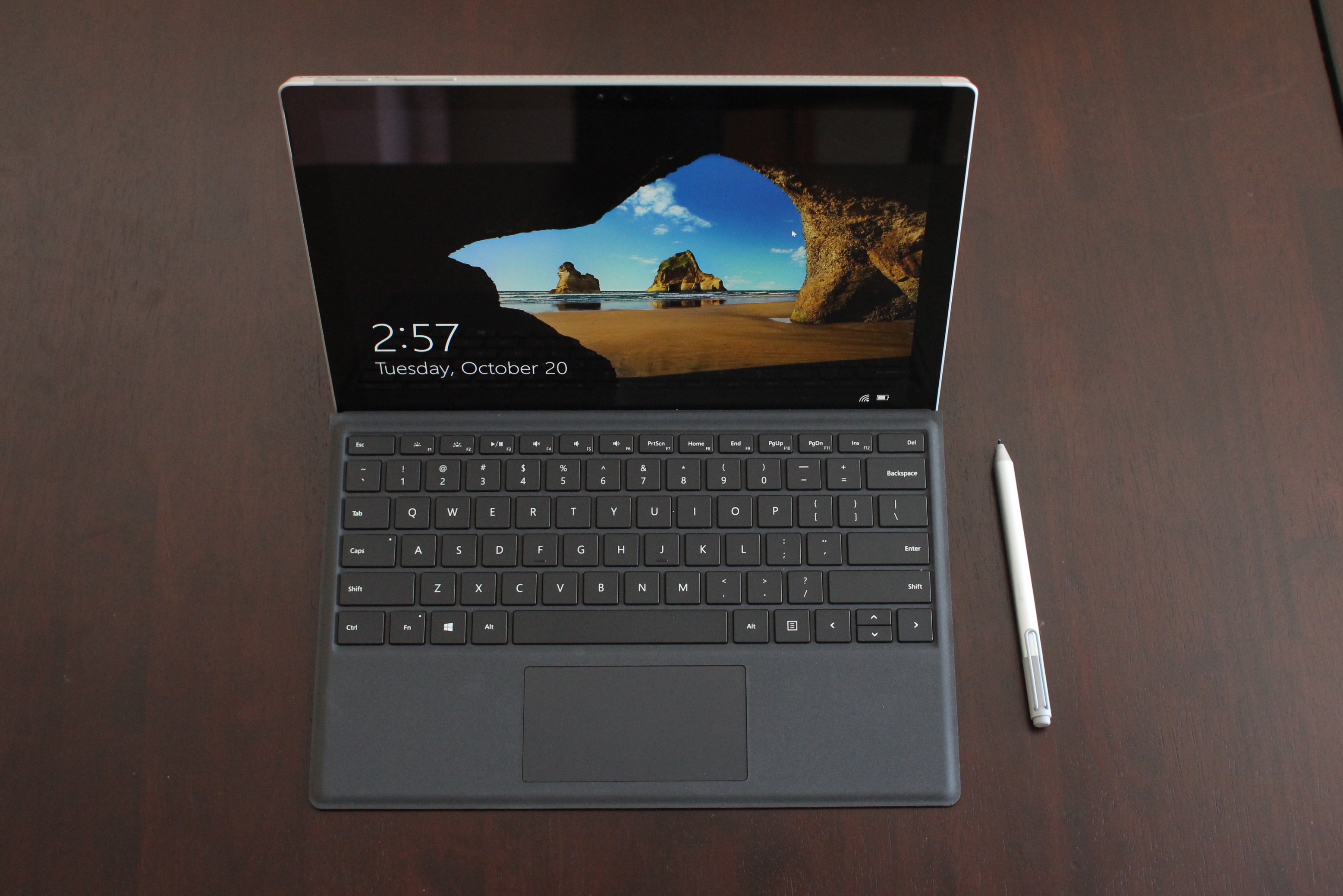 When it comes to ports, it’s really the same story, Microsoft neglected to include a USB type C port, which means that charging is still done via its proprietary connector, and there is still only one USB port. Albeit, it is a 3.0 port and can be expanded with a dock or hub, but do you really want to carry around a USB hub too?

The front-facing camera has been updated and includes support for Windows Hello and the pen has been refined as well; a side of the pen is now flat that allows it to attach firmly to the side of the Pro 4.

The kickstand is the same setup as the Pro 3, it has an ‘infinite’ number of positions and works well. Realistically, there was nothing to improve here, so it’s good to see that Microsoft didn’t tinker with the design.

Based on the specs, you can tell that Microsoft was happy with how the Pro 3 performed in the market and clearly didn’t want to change up its strategy; I don’t blame them, the Pro 3 was a capable machine, and the Pro 4 builds on its success.

In use, the Pro 4 is a confident device and Microsoft provided tweaks in all the right places. The slightly larger display with a smaller bezel makes for a better user experience and inking support is still the best in the industry. When writing on the display, it feels like your pen is actually dropping the ink right on to your content and the pen now has a single flat slide that I find to be more comfortable in my hand. There is also a button on the flat side of the pen that now makes it easier to select an area of content when inking which is a nice addition to the device. Also, like the Surface Book, this pen also has an eraser on the end that makes it easy to erase written content. 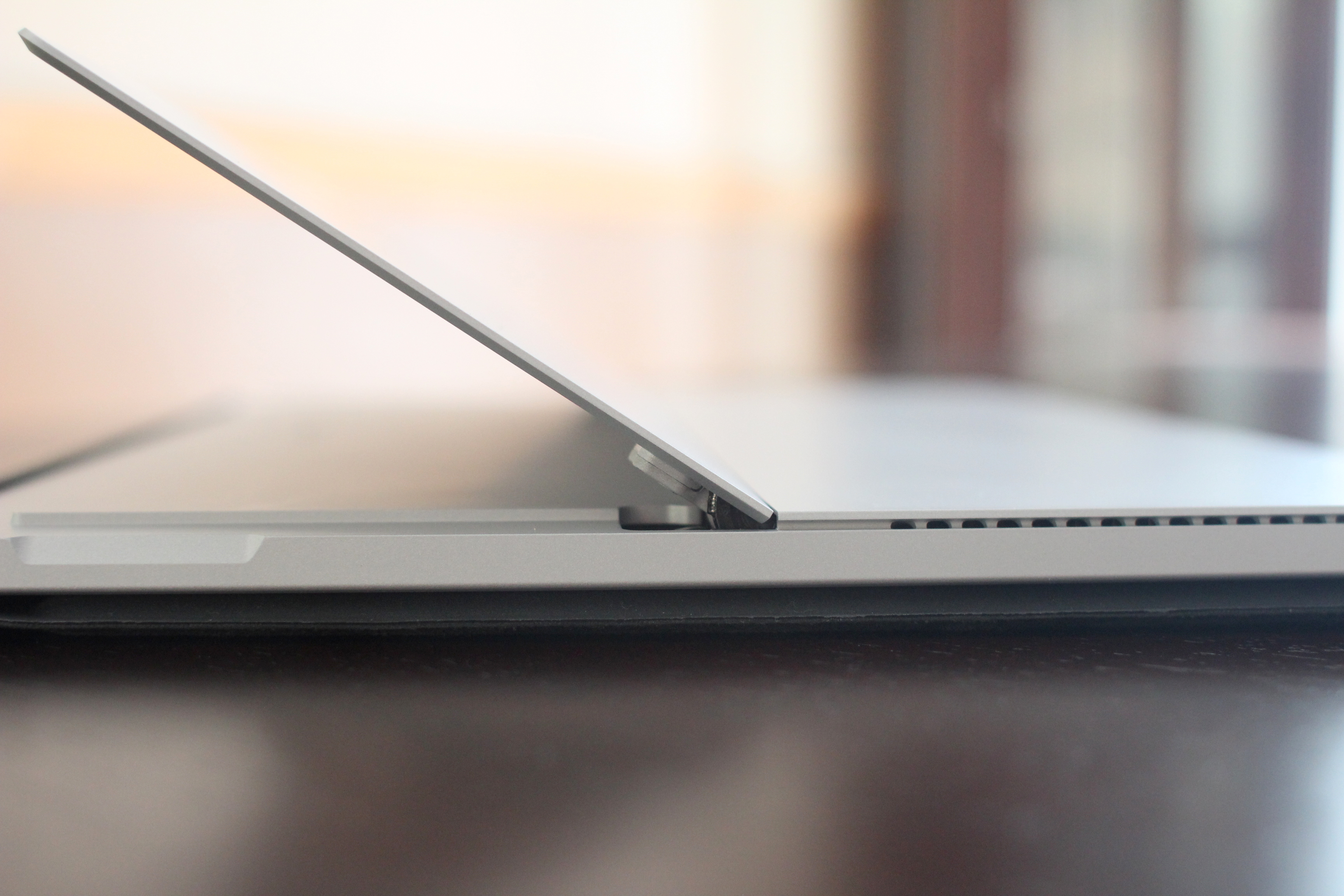 The version I am testing is the i5 model with 8GB of RAM and is running Windows 10. Battery life is rated at up to 9 hours, but I was experiencing closer to 7 with max brightness and heavy web browsing, which seems to fall in-line with expectations based on how Microsoft estimates battery life in their marketing material. To no surprise, the OS works well in this form factor and switching between tablet and desktop modes is fast and automatic when you detach the Type cover. This is yet another form factor that benefits from Windows 10 and its multiple user mode.

The Skylake processor hums along effortlessly and for the most part, the fans have not spun up during light operations which they would occasionally do with the Surface Pro 3. If you start streaming video or any type of heavy photo editing, expect the fans to turn on.

The Pro 4 does have one new feature that will be enticing to corporations and consumers, support for Windows Hello. Microsoft has included this feature with the device that offers improved security with facial recognition. 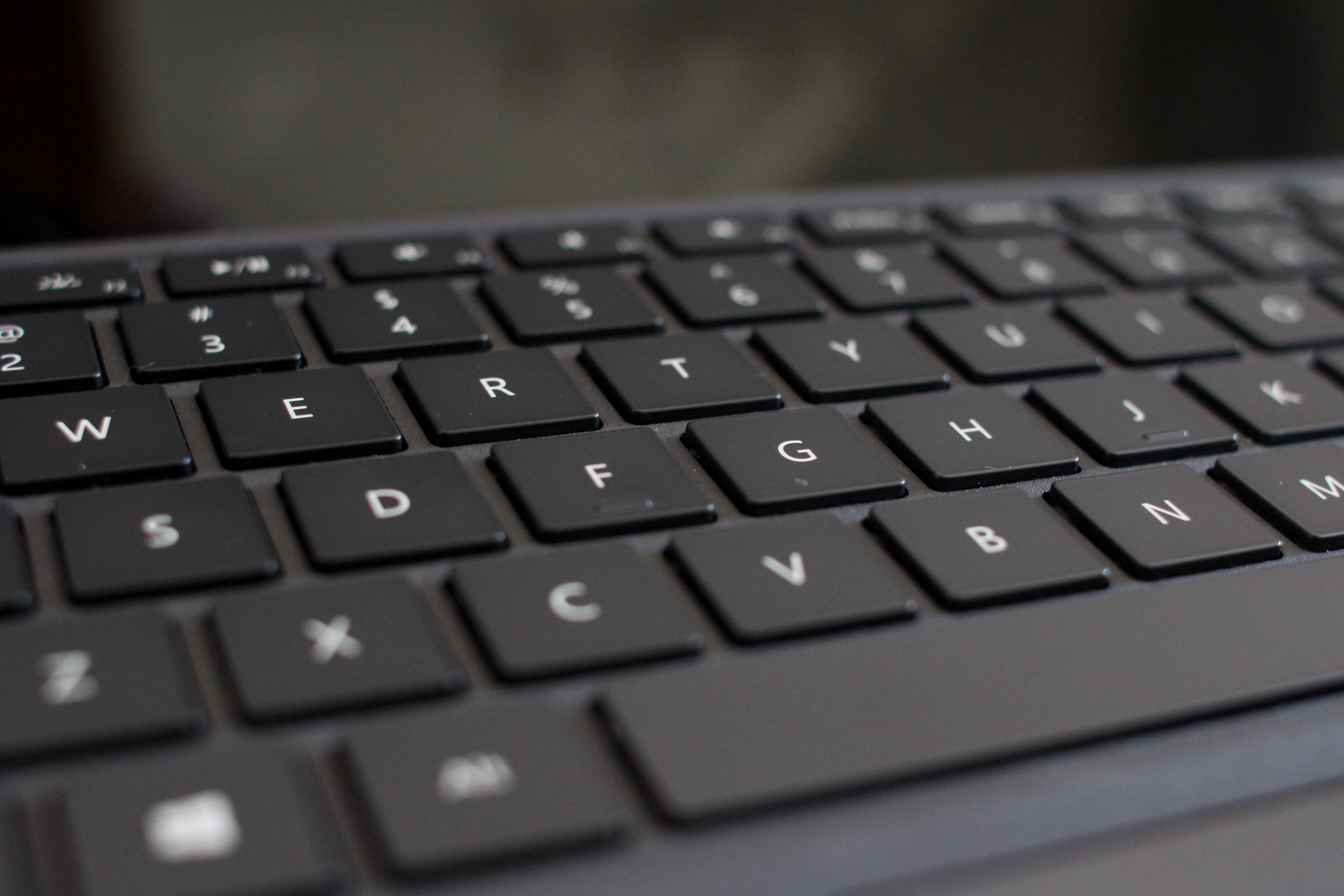 With the release of the Pro 4, Microsoft is introducing a new Type cover that has increased the spacing of the keys which results in a more comfortable keyboard with better feedback. And the larger, firmer trackpad, is the best yet for the Surface and it offers improved gesture recognition too.

Considering that for most users, the keyboard is where they interact with a PC, any improvements to the Type cover go a long way. When you pair up the display improvements with the refined typing experience, the end result is a quality update to the device.

I’ve been using the device for about two weeks now and unfortunately it still plagued by the same issues as the Pro 3; it’s still not great at sitting on your lap. Because the device is top heavy, when used on your legs, it still feels like it could topple over.

One change that the company did make between the Pro 3 and Pro 4 is that they got rid of the Windows key on the bezel which some may prefer as it could accidentally be pressed when holding the tablet but after getting accustomed to the key (which has been on every Surface to date except the Pro 4), I do miss it. I’m sure I’ll get over and adapt to having to hit the actual Start menu key, but it’s an adjustment for those who will be upgrading. 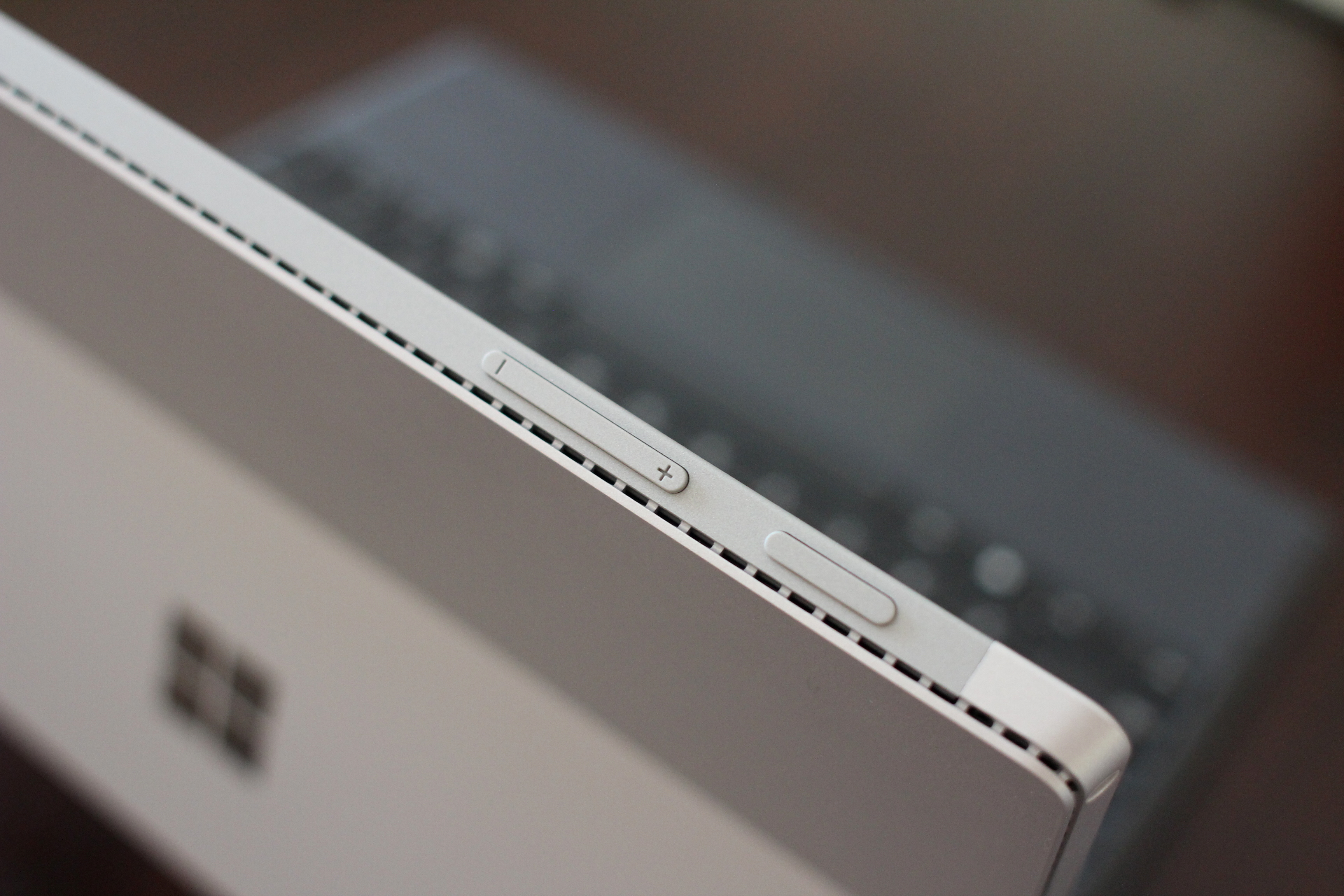 Also, Microsoft still refuses to let you remap the buttons on the pen. Currently, it launches OneNote or if you hold down the button, Cortana will open up which seems a bit redundant as you can simply say “Hey Cortana” to also open the virtual digital assistant. Having the ability to customize the pen would a welcomed change, as I don’t use OneNote enough to have a dedicated button for its use.

If you have ever used a Surface, you will feel right at home with the Pro 4, it’s nearly everything you would want in an upgrade, minus a few missing ports, but it is still a fully capable machine.

What’s the verdict on the Pro 4? It’s a good machine, not perfect, but a good machine that is a worthy successor to the Pro 3. It offers updates in all the right places but maybe not enough to entire Pro 3 users to upgrade but for those who are looking for a versatile tablet with excellent inking support, a good keyboard (except for on your lap) and don’t want to spend $1499 for a Surface Book, the Pro 4 offers a compelling solution that will appease its owners for many years to come.