I love being on social media because I always come across something interesting related to PowerShell. Sometimes it is a trick I didn’t know about or a question someone is trying to figure out. I especially like the questions because it helps me improve my understanding of how people learn and use PowerShell. Work load permitting, I’m happy to jump in and help out. One such recent challenge centered on string parsing. Although you’ll hear me go on and on about object in the pipeline, there’s nothing wrong with parsing strings if that’s what you need. There are plenty of log files out there that need parsing, and PowerShell can help.

In this case, I’m assuming some sort of log file is in play. I don’t know what the entire log looks like or what the overall goal is. That’s OK. We can learn a lot from the immediate task. Let’s say you have a string that looks like this:

I’ve changed the values a little bit and modified my name to make it more challenging. The goal is to grab the name from the string. I want to end up with:

There are several different ways you can accomplish this. The right way probably depends on your level of PowerShell experience and what else you might want to accomplish. I’ll start by assigning this string to variable $s.
When I am faced with string parsing, sometimes it helps to break the string down into more manageable components. To do that I can use the split operator. There is also a split method for the string class. I am going to assume you will take some time later to read more about split.

The “\s” is a regular-expression pattern that means a space. The 2 parameter value indicates that I only want two substrings. In other words, split on the first space found.

I end up with an array of two elements. All I need is the second one.

Now for the parsing fun, let’s use the string object’s SubString() method.

I am telling PowerShell to get part of the string in $t starting at character position 1, and then getting the next X number of characters. In this case, X is equal to the length of the string, $t, minus 2. This has the net effect of stripping off the outer parentheses.

Here’s a variation, where I split on the “(” character.

The difference that this gets rid of the leading parenthesis, so all I need to do is get everything up to the last character. By the way, if you look at a string object with Get-Member, you will see some Trim methods. These are for removing leading and/or training white space. Those methods don’t apply here.

There’s one more way to split a string that you might find useful. You can treat all strings as an array of characters. This means you can use array index numbers to reference specific array elements. Counting elements in an array starts at 0. If you run $t[0] you’ll get the first element of the array, in this case ‘O’. You can also use the range operator. 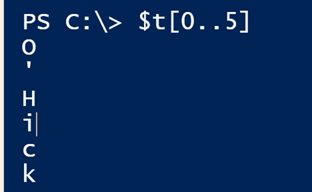 An alternative to splitting a string in Windows PowerShell. (Image Credit: Jeff Hicks)

Right now, $t has an extra ) at the end that I don’t want. I need to get everything up to the second-to-last element.

This will give me an array displayed vertically, which you can see in the screenshot above. With that said, it’s easy to join the spliced string back together.

It might look a bit funny to lead with an operator, but if you read about_join, then you’ll see this is a valid approach that works.

Using the -join operator to put our string back together. (Image Credit: Jeff Hicks)

I’m assuming you want an easy way to do this type of parsing, so I wrote a simple function.

If you look through the code, then you’ll see I am using the Trim() method. I am using it because I don’t want any extra spaces at the beginning or end of the string to be included.

Going back to my original string variable, I can now parse it with a one-line command:

If it makes more sense to you to break this into separate steps, that’s OK.

Next time we’ll look at string parsing using regular expressions, and it won’t be scary, I promise.