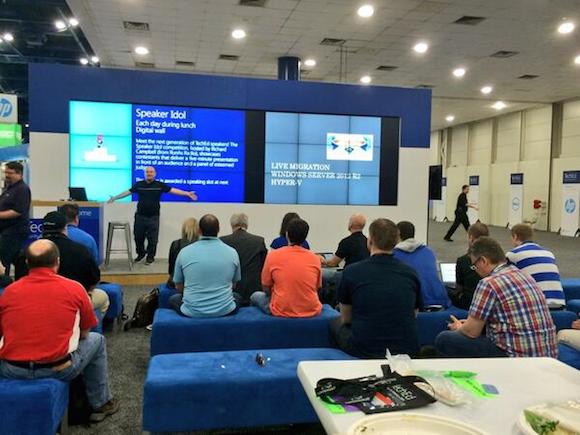 According to a post by Microsoft’s Denise Begley on the Channel 9 website, Speaker Idol contestants are “… invited from those who have never spoken at TechEd before and they submitted breakout session proposals to TechEd North America 2014 but were declined.”

This year, Petri IT Knowledgebase Contributing Editor Aidan Finn decided to throw his hat into the Speaker Idol ring and joined a handful of other contestants as they worked through several days worth of qualifying events — hosted by Richard Campbell from the .NET Rocks Internet audio talk show — where a panel of judges evaluated each contestant and decided who would advance to the next round.

Aidan Finn giving his presentation during the final round of Microsoft TechEd 2014 Speaker Idol.

Aidan’s qualifying presentation started off as a discussion of Windows Server 2012 Hyper-V SMB live migration, which I’ve embedded below. The presentation quickly departed from the announced title, and Aidan proceeded to tell a tale about how he once saved a well-known IT speaker and personality from the jaws of a hungry alligator. You can also read Aidan’s thoughts on the qualifying round on his personal blog.

Aidan managed to make it into the final round of judging as an alternate, and was then tasked with coming up with an all-new presentation on a technical topic, which he had to produce in under 24 hours. Aidan’s final 5-minute presentation was focused on Windows Server 2012 R2 Hyper-V Live Migration. Aidan also described the process he went through to produce his final deck in detail in another post on his personal blog.

The final round of judging began at 12:30pm local Houston time on Thursday, May 15th. After all the votes were counted, Aidan emerged as the winner, and will be speaking at Microsoft TechEd 2015. Congratulations Aidan!

I hope you’ll join me and the rest of the Petri IT Knowledgebase team in congratulating Aidan on his win, and you can also view some additional photos from this year’s Speaker Idol contest on our Facebook page.

So did you happen to catch the Speaker Idol competition at TechEd 2014 this year? Drop me an email or touch base with me on Twitter, Google+, or Facebook (see below) and let me know what you think.