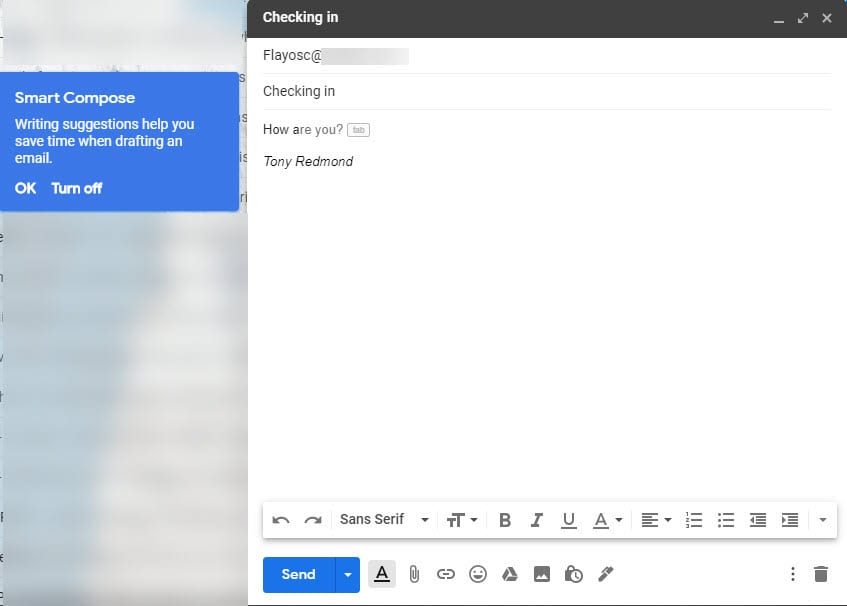 Smart Technology Figures Out What You Want to Type

On May 8, Microsoft announced plans (MC212345) to introduce a feature called “suggested text” to OWA. Microsoft 365 roadmap item 63795 says “Using smart technology, Outlook will predict text while you type. Just use the Tab key to accept the text prediction.” Text predictions is another name for the feature.

OWA’s new feature is like Gmail’s “Smart Compose” in that it suggests text for the user to add to messages based on analysis of how they composed messages in the past. Figure 1 shows how Gmail works with the word “you” suggested after I typed “how are.” As we’ll see later, Microsoft’s feature also uses the tab key (or right arrow) to accept the recommendation made to insert text.

As happens with many Office 365 announcements, Microsoft adjusted the original timeline with the current state that the feature is now deployed to all commercial cloud U.S.-based customers. As discussed later, some additional work is needed to prepare for deployment elsewhere. The technology is not yet approved for deployment in the sovereign clouds, including GCC and GCC High.

Figuring Out Your Email Style

All of us compose email in our own inimitable style. Similar phrases are used time after time. Certain words are favored over others and it can be predicted when users are likely to type something based on what’s gone before. If you know someone well enough and have read enough of their messages, you could probably anticipate what they might say in response to a topic.

Given their large quotas, Exchange Online mailboxes hold more messages than their on-premises counterparts, so there’s lots of training material available to develop models. With enough training, the models become accurate enough to be able to predict with reasonable confidence what someone might type next given what’s gone before.

Training Models for Your Communications Style

The magic behind text predictions is a mixture of artificial intelligence, the Microsoft 365 substrate, and lots of server horsepower. Microsoft uses trainable algorithms based on recurrent neural networks to analyze messages in user mailboxes and build models of how the mailbox owners communicate in email. The algorithms look for patterns in text to know the probability of someone using different phrases in different circumstances. For example, you might have a habit of signing off messages with a phrase like “Let’s meet for coffee soon.” After observing many examples of using the phrase in a message, the model can reasonably conclude that if you type “Let’s meet for” the next few words might be “coffee soon” and make that suggestion.

Training takes a lot of processing, and it’s something that is made possible by the massive number of servers available in cloud datacenters. Harnessing artificial intelligence like this is a prospect made feasible by the cloud. The trainable classifiers used in other parts of Office 365 like data governance are another example of how artificial intelligence is becoming mainstream. Even so, few on-premises organizations could contemplate investing in the necessary hardware to process data to create the necessary models simply because they couldn’t justify the expense.

Model data are stored in a hidden folder in user mailboxes and are available to clients capable of using the models. The data is anonymized, and personal details are not retained. OWA is the first client to incorporate text predictions, but it’s likely that the feature will appear in other Outlook clients, notably Outlook mobile where anything that eases the composition of messages is appreciated.

The way Outlook desktop clients are built, deployed, and updated and the fact that they can work offline makes these clients a more difficult platform for models which are frequently updated, but it’s possible that we will see text predictions available in Outlook desktop too.

Figure 2 shows how text prediction works in OWA. As the user types text, OWA monitors what they enter to figure out if it can predict what might word comes next. In this case, I typed “tell y” and the model predicted that “y” was “you” and the next word is “that.” To accept the prediction, I press Tab and continue typing.

Tabbing to accept text predictions quickly becomes second nature. I’d prefer if the inserted text included a space instead of forcing the author to insert one before going to the next word, but this is being picky.

Looking at the available compose options, you could see how users might be confused by the different choices in quick suggestions, suggested replies, and text predictions. Some training is likely necessary to help people understand what each of these features do.

The U.S. is a country where English is a common language, albeit one with many dialects and manners of communication. This poses a linguistic challenge for any model based on detecting patterns to understand the essential characteristics of how individuals compose text. Microsoft thinks they have got a solid foundation for dealing with the vicissitudes of U.S. English and are happy at what their telemetry reports of user interaction with text predictions. Microsoft says that they focus on “high value inserts” instead of simple predictions and report that nearly 50% of suggested inserts are accepted by users, which is pretty good. And given the scale of Office 365, helping users to compose messages faster saves many hours.

The challenge now is to take the lessons learned in mastering model development for U.S. English to other geographies where English is the predominant language, including many regional dialects and variations of spelling, tone, and slang. After figuring out how to train models for UK English, Irish English, Australian English, and so on, the next step will be to tweak the models to deal with other languages, including their regional variations. Microsoft says that they’ll make announcements when text predictions can support other languages.

It takes a little time to become used to text predictions. Some people will find the suggestions irritating while others will consider the feature a valuable way to save time (and typing). If you use the same phrases time after time, the model will be more valuable immediately, but the nature of machine learning is that the model should improve for everyone over time. The same was said about OWA’s Clutter feature and the Focused Inbox, which is available in all Outlook clients. Time will tell if people have the same diametrically opposed view of text predictions as they do for the Focused Inbox.