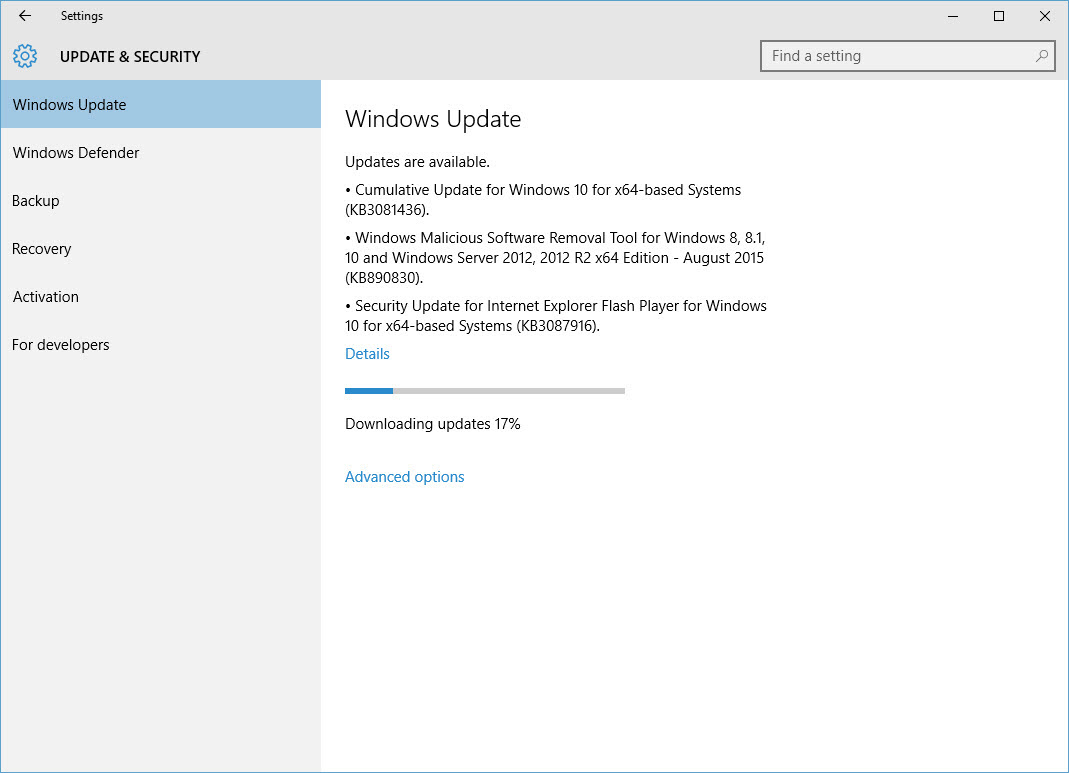 Microsoft officially launched Windows 10 on July 29, and last week saw the release of Service Release 1 (SR1), and two cumulative packages, each containing all the updates released since build 10240 was released to Windows Insiders, plus previously unreleased fixes. But despite the welcome release of SR1, there are still issues with the OS that make it hard to recommend that the average user should upgrade.

I can’t report any upgrade issues with the devices I have tried so far, but that doesn’t seem to be the case for everyone, with some reporting that despite passing the pre-requisite and readiness checks for Windows 10, upgrades sometimes fail and have to be rolled back. Another reported issue is that peripheral devices that were supposedly compatible with the new OS, don’t work after the upgrade.

Some users have also been reporting problems installing SR1, which under certain circumstances leaves machines in a continuous reboot cycle as the update fails, but as there’s no opt-out for Windows Update, the OS attempts to run the update again. A second cumulative update for Windows 10 came down the pipe, which could include a fix for this issue, but so far there’s no mention of what issues it addresses.

Microsoft is marketing its Edge browser in Windows 10 as a major new feature, and you can see my review, Living on the Edge: Microsoft’s New Browser for Windows 10, on the Petri IT Knowledgebase. SR1 has solved the issues I wasn’t previously experiencing with some websites causing Edge to hang, but there are still sites that insist on being opened using Internet Explorer, and the annoying bug that prevents the cursor focusing on the address bar when opening a new tab is still present, and it’s enough to slowly drive a person crazy.

You might argue that Edge’s rough edges aren’t important, as many will default to Chrome or Firefox, but as a key component of the operating system, Edge needs to make a good first impression, especially as there’s still a significant proportion of users who wish to use the built-in browser. And if Microsoft is looking to repair the reputational damage created by Internet Explorer over the years, then ironing out those small annoyances is going to be critical for user uptake.

If you are upgrading from Windows 8, you might have Universal apps from the Windows Store that you use on a regular basis. Unfortunately, at the time of writing, many apps originally intended for use on Windows 8 run poorly on Windows 10. This is not strictly Microsoft’s fault, as apps may need to be modified to run on Windows 10 correctly, but many developers simply haven’t got round to updating their code to ensure compatibility with Windows 10, so you could be stuck with apps that suffer from display issues, and bugs that break functionality.

That brings me to the Windows Store, which still seems to suffer from some odd issues after SR1. In my experience, it’s quite common for newly downloaded apps to hang for ages on Restoring user data, meaning that you could be waiting a while before you actually get to use downloaded apps.

Having been seriously broken pre-SR1, I can now report that switching between user accounts works reliably, although there can still be some delay when logging out, and then trying to log back in to an already logged-in user. Nevertheless, SR1 enables basic functionality that was previously broken.

If you’re an IT admin, this might not be deal breaker, but a considerable annoyance. Microsoft will only be releasing the Remote Server Administration Tools for Windows 10 later this month, and although not long to wait, it’s something to bear in mind.

Bluetooth has been a pain point all the way through the preview, and while it’s a little more reliable as I write, connecting to my Bluetooth speakers usually requires a couple of attempts before a stable connection is established. On a happier note, I can report that I no longer have problems connecting to my Lumia 640.

Microsoft has made some significant changes to the networking stack in Windows 10, and while this initially seemed to cause issues for some WIFI adapters, those problems have largely been solved. However, the same cannot be said for some USB network adapters, such as those used to connect to LTE networks.

Despite that my local 4G/LTE ISP issues, modems that use generic Windows drivers and haven’t been changed in Windows 10, the device installs and makes a connection to the Internet, but slows the computer to a crawl. I contacted the ISP, and they acknowledge there’s a problem, and as such, they don’t offer support for Windows 10 at this time, but are actively working with Microsoft to resolve the problem. Although no time frame was given, I can guess that the problem isn’t going to be fixed anytime soon.

Should you upgrade to Windows 10?

Windows 10 has received a lot of praise in certain quarters, and there are indeed reasons why you might consider upgrading right now from previous versions of Windows. SR1 has solved some critical issues with Edge, and the OS generally seems more responsive, and the Start menu and Cortana more reliable, but I’d still like to see some of the basic issues that I’ve been experiencing resolved, and more third-party developers updating their apps to ensure a great user experience on Windows 10 before widely recommending an upgrade.