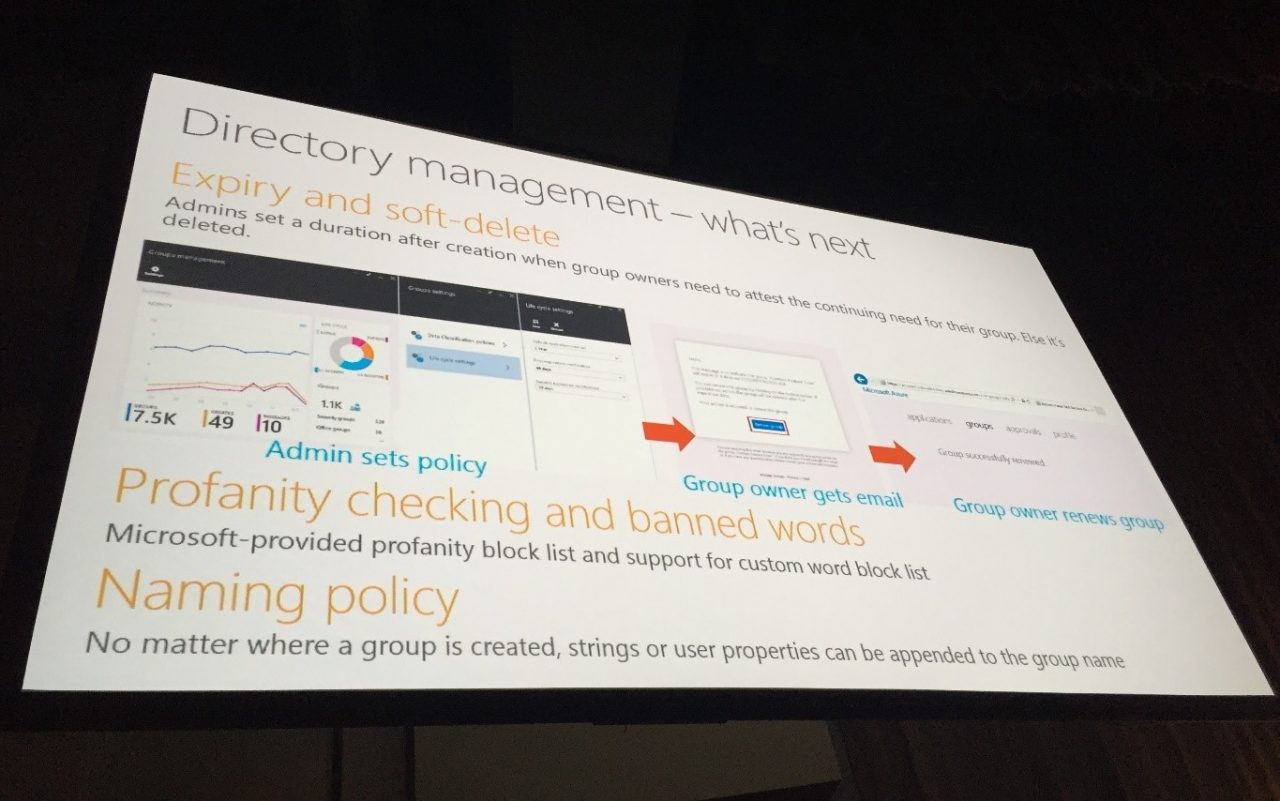 Office 365 Groups occupy a special place in Microsoft’s collaboration strategy. The link-up between Yammer and Groups was the headline news for some people, but a lot of other facts were revealed at the Ignite conference, mostly around operational improvements to help tenants manage groups better. Here’s some of what I encountered.

Microsoft released an iOS version of the Outlook Groups app some time ago, as well as versions for Android and Windows 10 Mobile. It’s a nice app that leverages the Microsoft Graph API to allow users to interact with conversations, calendar, and documents and group owners to perform some basic group maintenance, including the creation of new groups (but only if permitted by policy). Until now, the iOS app has operated in phone mode and did not look good on an iPad. Now we have an iPad edition of the Outlook Groups app. The extra screen real estate makes it easier to track conversations, work with documents, and view group calendars, which is welcome for those of us with failing eyes.

An interesting press release issued on September 21 revealed AvePoint’s plans for its new Office 365 lifecycle management product. AvePoint’s background is in SharePoint management, so it’s unsurprising that it has expanded to cover Groups. I spent some time with the AvePoint folks at Ignite and learned that Groups are managed through a new module now available in the AvePoint Governance Automation Online product. Basically, AvePoint provides a structured framework to allow tenants to define who can create groups, how they can create groups, and what kind of groups are created. AvePoint extended its “lease” model from SharePoint to cover groups, meaning that you can assign a lifetime period for new groups, after which the lease has to be renewed or lapse. The company also wants to enable an “inactivity threshold” to detect inactive groups that are candidates to be removed from the tenant. Hopefully they’ll do a better job than my PowerShell script! If you already use AvePoint to control SharePoint sites, you’ll probably like what they do for Office 365 Groups.

Microsoft also plans to implement policy-driven lifecycles soon. According to an Ignite session (Figure 1), Microsoft will allow group owners to declare how long a group should last (its duration) when the group is created (or by editing its properties). When that duration is reached, the group owners receive an email that notifies them that “time’s up,” and they have to decide whether the group should persist or be removed.

Two other features listed shown in Figure 1 are the implementation of profanity checking and banned words list and a naming policy. Profanity checking is hugely important in the enterprise, but it’s even more important in the education sector. A naming policy allows tenants to ensure that all groups are given a consistent display name to make navigation of address lists easier for users.

Currently, you can implement these policies through the Exchange Online organizational configuration for the tenant. However, many of the products now lining up to integrate with and exploit Office 365 Groups have no knowledge of what an Exchange organization configuration is and a more neutral method of providing and enforcing policy is needed. The change to use an Azure Active Directory policy is already in place to control group creation. This is just another step down the path to moving all policy settings for Office 365 Groups into AAD.

No details are yet available as to how such a process could be automated, which might be necessary in a large-scale implementation spanning thousands of groups. For instance, if a group is obviously active (based on conversation or document activity), then an automatic extension might be granted. This post provides some tips how to go about identifying obsolete groups. It wouldn’t take much to reverse the logic to identify active groups.

Microsoft also said that it plans to introduce the much-awaited soft-delete functionality for Office 365 Groups by the end of 2016. Today, if you delete a group (or make a mistake and delete a group), the totality of the group is irretrievably lost. Its data is hard deleted from Exchange Online and SharePoint Online and the AAD group object is removed. If a plan existed for the group, it is lost, too.

The world of IT is full of examples of administrator mistakes. Most of the time, a backup or other mechanism can be used to nullify the mistake and bring data back online. Given the popularity of Office 365 Groups and their position at the core of Office 365 collaboration, it has taken Microsoft far too long to deliver a soft-delete capability. Two years, in fact.

Microsoft and Workday Link Up Through Groups and Delve

The announcement of a deal inked by Microsoft and Workday to create a global strategic partnership around Office 365 is interesting. Although the first functionality to connect Workday’s HR and finance applications with the Office 365 fabric won’t appear until “the first quarter of 2017,” it’s a good example of how Microsoft can now make a pretty compelling platform available to third parties who sell cloud applications. In this case, the press statement called out Office 365 Groups and Delve Analytics (sorry, MyAnalytics) as the points of integration. We’ll have to wait and see how the integration proceeds.

My article on how the Yammer and Groups connection will work provoked a number of comments. Most people with whom I spoke felt that the announcement will have little impact on tenants who have already rolled-out Office 365 Groups. After all, the connection only works for new Yammer groups. However, it’s likely that the Yammer community will find value in the connection because of its ability to expose resources such as SharePoint libraries, shared notebooks, calendars, and plans to Yammer groups, but only new Yammer groups.