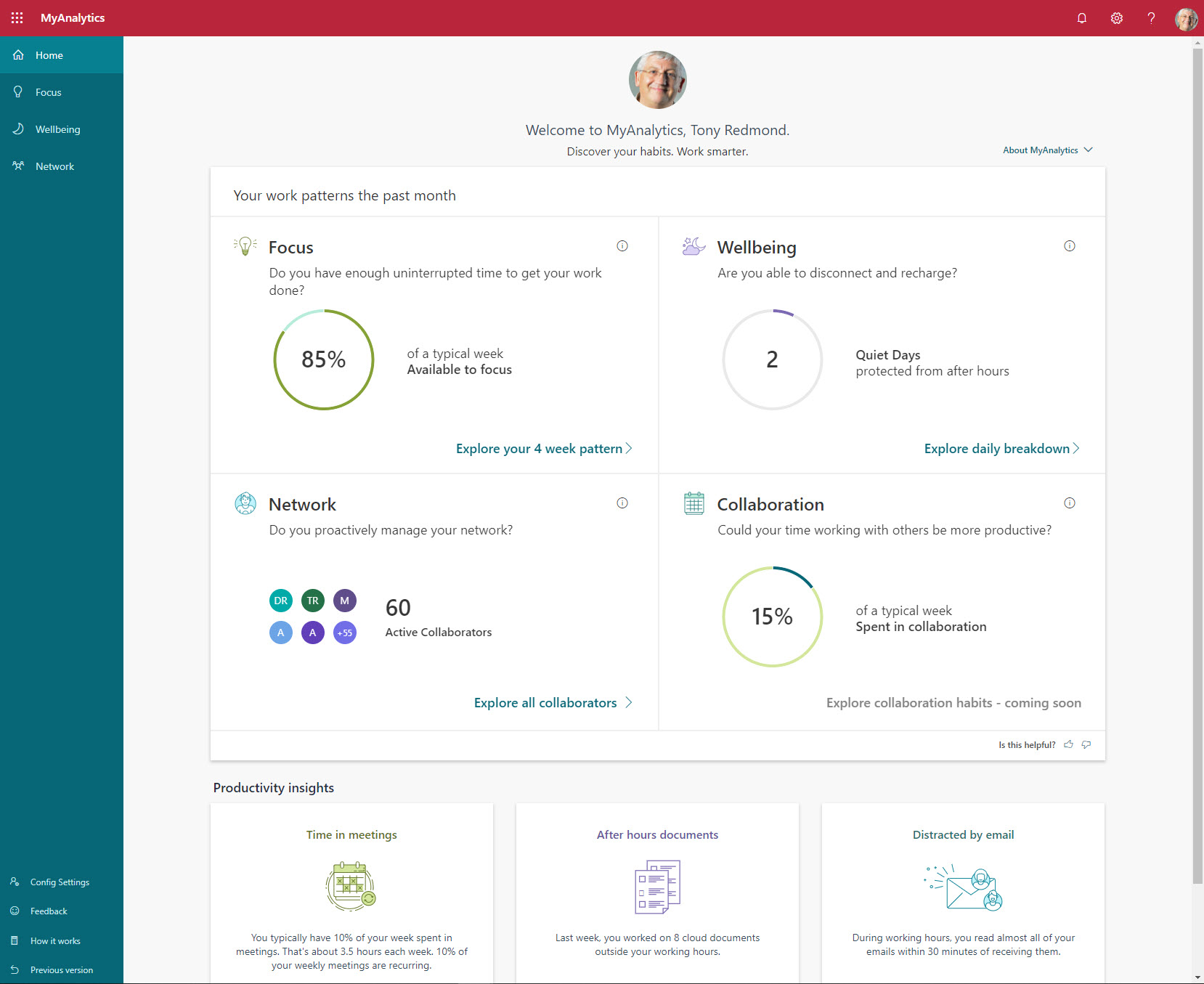 Understanding What I Do Inside Office 365

I’ve used MyAnalytics since Microsoft launched the app as an add-on to Delve in 2015. As someone interesting in exploring data, the notion of discovering how I interacted with systems is attractive. And at the time, MyAnalytics satisfied my need to know how many email messages I sent and received (and when), how I avoided the suffocation of too many meetings, and my total inability to focus past the arrival of a new message.

MyAnalytics was part of Office 365 E5 or available as a separate add-on option. Now it’s available to E3 and E5 users. Since 2015, MyAnalytics lost relevance for me. Its focus on analysis of email and calendar data was satisfying, but especially since the preview of Teams in 2016 and its launch in March 2017, the data served up by MyAnalytics became less and less interesting because the transition of work to Teams wasn’t highlighted in any statistic generated by MyAnalytics. That, and the fact that MyAnalytics ignored the hours I spend working with Word, Excel, and PowerPoint meant that I hardly ever accessed its dashboard.

In January, Microsoft promised that MyAnalytics would include signals generated by Teams, Skype for Business Online, and documents stored in SharePoint Online and OneDrive for Business libraries. I waited patiently for these signals to appear, but nothing much changed until MyAnalytics recently offered the chance to preview the new dashboard with “fresh insights on your work habits.” The approach taken in the preview is now generally available.

Insights Rather than Data

The new dashboard moves MyAnalytics away from counting email and analyzing how many hours people spend in meetings to informing through insights and suggestions. Naturally, the insights are powered by artificial intelligence (because humans can’t figure this stuff out?), like many other new features Microsoft is rolling out for Office 365.

Instead of weekly statistics, MyAnalytics uses a month-long horizon to figure out your most recent work habits. The insights presented by the application are intended to help you work smarter and “achieve more quiet days.” According to Microsoft, a quiet day is one without significant after-hours work. Signals generated by email, chats and calls (from Teams and Skype), and meetings are analyzed to figure out if someone is always thinking about work all the time.

The new dashboard (Figure 1) divides its observations into Focus, Wellbeing, Network, and Collaboration. These categories haven’t changed since the previous version; what has changed is the presentation of the information.

Interpreting the information presented by MyAnalytics is intensely personal. For instance, in Figure 1, MyAnalytics tells me that 85% of my time is available for focus. In other words, I’m not booked for meetings for large swathes of my working day.

On the surface, that makes me seem like I don’t do much work – or at least, I don’t participate in many meetings. What the analysis misses is what I do during this focus time, most of which is taken up doing things like writing this article. It seems like MyAnalytics could do a better job of analyzing the signals collected about document activity in the Microsoft Graph. For instance, if a document is saved frequently (using AutoSave or manually) to SharePoint or OneDrive, it’s evidence that someone is working on that document. This could be construed as focus time, but it would be nice to have a breakdown of what I did during all my focus time.

No Drilldown in New Dashboard

The new MyAnalytics dashboard lacks any drill-down capability to reveal the data behind the analysis. Some people might like this because they want to focus on the high-level analysis and be told what they could do to improve the way they manage time. Others (including me) like to know what lies underneath recommendations. The older interface was more satisfying in this respect because I could associate data with personal knowledge of activity peaks.

Microsoft promises that MyAnalytics will soon be able to generate personal plans to help people set their own goals to improve their work patterns. They’ve chosen Focus as the first area and say that MyAnalytics can help people establish a daily routine for how they work that includes time set aside to be uninterrupted by other tasks. A background process looks for time slots in your diary and books time on your behalf (usually in the morning) to make sure that other competing priorities don’t steal that time away.

Microsoft is also updating OWA so that if you receive a meeting request that conflicts with focus time, you’ll also get a suggested available slot to reschedule your focus time. Teams will also respect slots booked for focus time by switching a user’s online presence state to Do Not Disturb. Hopefully, the presence update will stop some unplanned interruptions.

The MyAnalytics team is also refreshing their Outlook (desktop and OWA) add-in (now called Insights) to offer more “inline suggestions” (about things you should do). The add-in suggests people who are important to you, offers to book focus time, and tasks that you might need to follow up based on machine learning analysis of email (Figure 2). As I noted in an article covering an earlier implementation of the feature, the natural language processing for this feature is still limited to English. 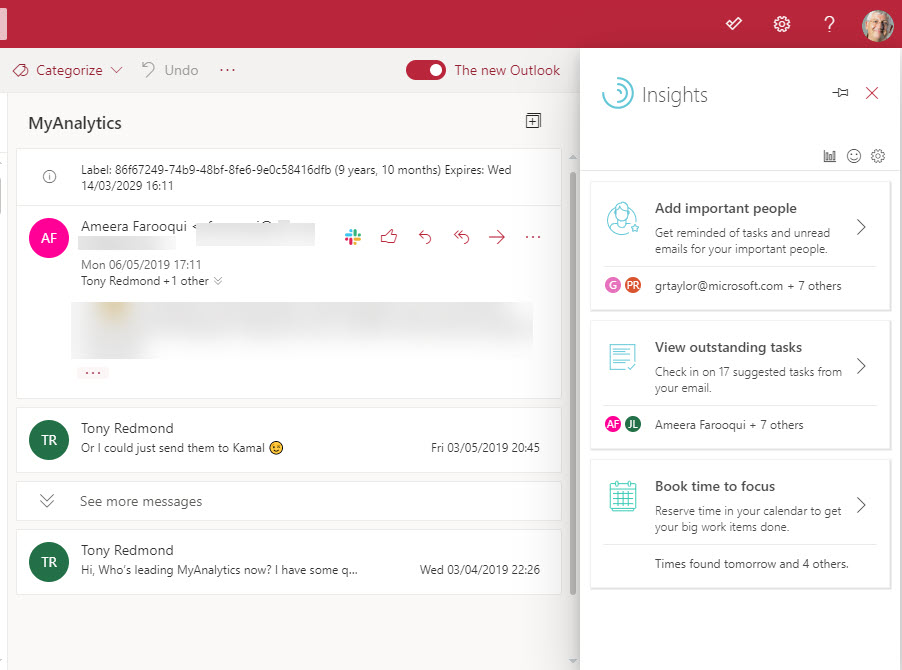 Those who never think about looking at add-ins might not discover Insights, so MyAnalytics also sends a weekly summary message to its users (Figure 3). The idea is that people can use the summary to plan for the following weeks, hopefully by improving how they manage time.

Email users have always been well covered for analytic information about their work habits, but there’s nothing equivalent for those who spend most of their time in Teams, SharePoint, Yammer, or other Office 365 apps. 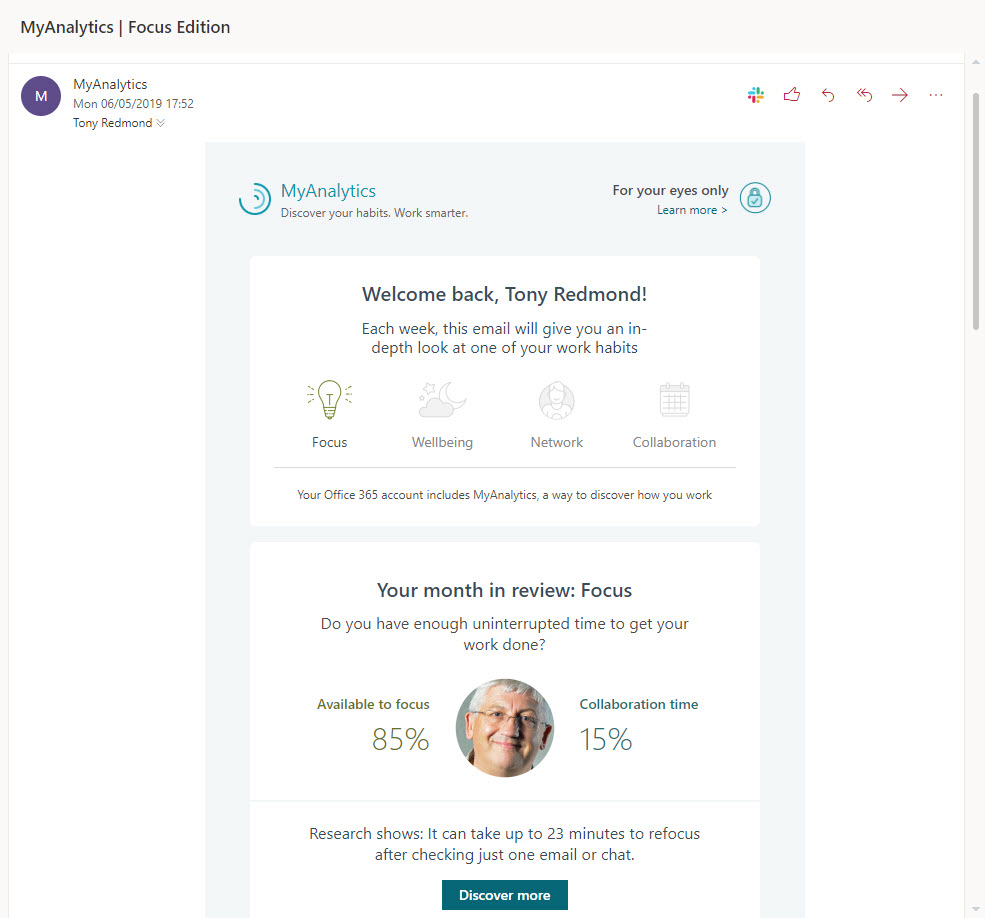 MyAnalytics is not for everyone. You’ll either like or hate the concepts behind the application. I’m also unsure how existing MyAnalytics users will take to the new dashboard and a new focus on helping people cope with an overload of collaboration and a flood of notifications (that end up causing focus switches).

Tools like MyAnalytics can help improve how people work. Not everyone. But enough to help organizations who want to change for the better.