Hyper-V is Microsoft’s native hypervisor stack that can be used to create and run virtual machines (VMs). This allows administrators, developers, power users, and others to share their computer’s resources with one or more VMs for testing, development, security, legacy support, labs, and much more.

Note that on a server host, these guest VMs can be naturally used to actually provide services and workloads for client computers. Hyper-V also provides virtualization on Windows, which include Windows Server and Windows desktop clients.
You should also note that although the term “Hyper-V” may seem identical regardless of where it’s used, Microsoft now differentiates the term: “Hyper-V on server” is used for Server operating system, and “Hyper-V on Windows” is used for desktop operating systems.
There are some feature differences between the two, and the following features will not function on Windows 10: Remote FX capability to virtualize GPUs, live migration of VMs from one host to another, Hyper-V Replica, Virtual Fibre Channel, SR-IOV networking, and Shared .VHDX.

There are several different system requirements you must be aware of before attempting to install Hyper-V on Windows 10:
Operating system edition: On Windows 10, Hyper-V can only be enabled on the Pro and Enterprise editions of Windows 10.
CPU Architecture: Hyper-V can only run on a 64-bit system. The CPU must have support for Second Level Address Translation (SLAT). SLAT is a feature present in the current generation of 64-bit processors by Intel and AMD. Also note that Hyper-V does support creation of both 32-bit and 64-bit guest operating systems in the VMs, but the host itself must be running a 64-bit operating system.
Memory: You need to have at least 4GB of RAM.
Hyper-V has a feature called Dynamic Memory, which allows you to assign a dynamic range of memory allocation to the guest VMs, where you specify a minimum and maximum. This enables you to actually assign more memory to the guest VMs that you actually have on the host computer and share unused memory between guest VMs.
A good method of finding if your existing CPU can run Hyper-V is to use a free tool by Microsoft called CoreInfo.
Execute the following command from an elevated command prompt (Run as Administrator):

In the screenshot above, you can see that my existing processor does support Intel hardware-assisted virtualization, and Intel’s extended page tables/second level address translation (SLAT).

Installing Hyper-V on Windows 10 with the GUI

This approach is the easiest for most users. Right-click on the Start button and choose “Programs and Features”. 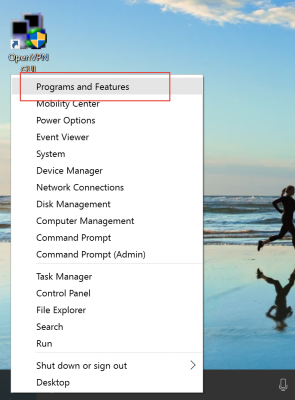 In the “Programs and Features”, choose “Turn Windows Features on or off”. 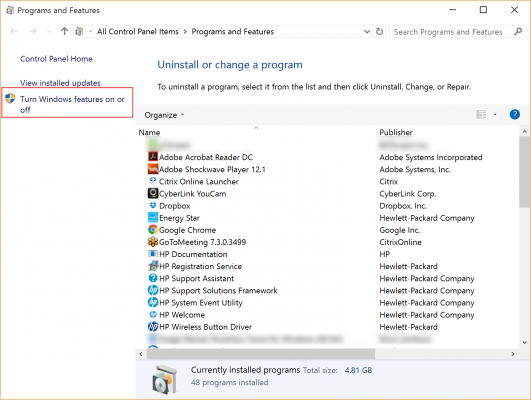 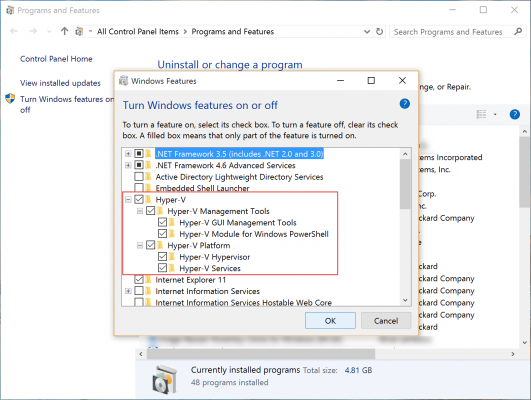 You’ll need to reboot your computer after the installation has completed. The computer will automatically reboot twice.

Installing Hyper-V on Windows 10 with PowerShell

Once again, you’ll need to reboot twice after the installation has completed.

Install using the DISM command through PowerShell or Command Prompt

Like in previous Windows versions starting from Windows Server 2008, the Deployment Image Servicing and Management (DISM) tool can be used to service Windows images and enable features.
Open a PowerShell console or Command Prompt console with elevated permissions, and type the following command:

Again, reboot the computer twice after completing the install.

Regardless on how you perform the installation of the Hyper-V role, there are some cases where you may need to completely shut down the system after these reboots, disconnect the power cable, and wait a couple of minutes. Then you can connect the power cable and turn it on. Only then will the role function properly. Note that this is a CPU issue, not a Windows-specific issue.