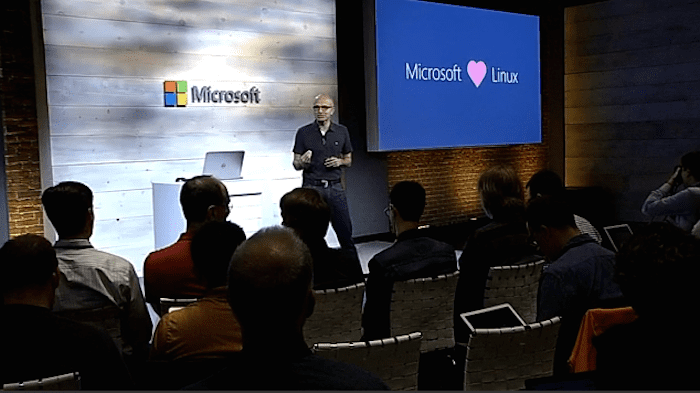 In recent weeks, Microsoft has entered into partnerships with both IBM and Docker in moves that strengthen Microsoft’s enterprise cloud vision. The IBM deal will see support for IBM software added to Microsoft Azure, namely IBM DB2, WebSphere Liberty, MQ, and the IBM Pure Application Service. On the IBM side, SQL Server and Windows Server will be offered on IBM cloud services, and IBM will bolster support for its software when running in Hyper-V virtual machines.

Microsoft’s partnership with Docker will result in the next version of Windows Server having support for Docker containers. Microsoft had recently announced that Microsoft Azure would support Docker running in Linux VMs, but this latest announcement broadens and deepens the engagement between the two companies.

An Evolving Mindset at Microsoft

Both the IBM and the Docker partnerships — along with other recent improvements to Microsoft Azure — underscore that  Satya Nadella’s Microsoft is a more accessible and collaborative company, particularly with how it has been much more open about working with other technology firms. Salesforce Founder and CEO Marc Benioff has been effusive in his praise of Nadella, with Business Insider reporting that Benioff had said, “When I look at John, when I look at Satya, when I look at you, I say, ‘Wow, we have three dramatically different leaders than what has been there for decades.’ To me that’s the No. 1 indication that there is a new Microsoft because the people are new at the top.”

Microsoft has also been becoming more supportive of Linux, with the company’s more public demonstrations of affection towards Linux — particularly in an October 20th media event where Nadella proclaimed that “Microsoft Loves Linux” — are starkly different from Microsoft under Steve Ballmer’s leadership.

During Ballmer’s reign, he once declared Linux was a cancer on the IT industry, forbade his children from using Apple iPods or Google, and was notoriously more competitive with other industry tech companies. It would be a mistake to say that Microsoft has suddenly become a more open company under Nadella’s watch — Microsoft began embracing Linux years ago — and part of Microsoft’s multi-platform and multi-vendor outreach is largely been driven by market realties: The advent of the cloud and the BYOD phenomenon has forced Microsoft to become a much more collaborative company.

So what do the Docker and IBM partnerships bring to the table? I’ll dive into each in a bit more detail below, starting with Docker.

What is Docker, and Why Should I Care?

Docker has been getting lots of attention these days for their Docker container virtualization technology. I’ve written a primer on Docker if you want a deeper dive on what all the excitement is about, but the essence of the technology is this: Using Docker containers, developers can make applications in any language, package them into Docker containers using the Docker Engine, and then easily run those applications in other environments, whether running on different OSes, or in the cloud and on-premise. In a blog post announcing the news, Microsoft’s Scott Guthrie wrote “…Docker enables apps to be quickly assembled from components and eliminates the friction between development, QA, and production environments.”

I spoke with Ross Gardler, a senior technology evangelist in Microsoft’s open technologies group, about the news, and he told me that the partnership with Docker has four main points:

David Messina, the VP of Enterprise Marketing at Docker, told me that traditional server virtualization and the container-based technology used in Docker are very complimentary technologies. “Application developers can focus on what they do, and system administrators can focus on what they need to,” Messina said. “Docker is focused on complete transportability…it’s a great compliment to existing virtualization technology.”

So what are some tangible benefits of the Microsoft – Docker partnership? Gardler described a model use case for a Windows Server system administrator where Docker could provide great benefits. “An enterprise building a set of next-gen applications based on Docker technology can still take advantage of all the enterprise-friendly aspects of Windows Server Hyper-V, as well as Microsoft’s full suite of security, governance, and management tools.”

IBM and Microsoft: Acquaintances, Not Friends?

By comparison, Microsoft’s recently-announced deal with IBM seemed to be more of a cordial business arrangement that an affectionate partnership, perhaps more of a marriage of convenience. IBM’s cloud efforts are facing headwinds from much more established and well-financed competitors, namely Microsoft, Google, and the biggest cloud provider of them all, Amazon. Microsoft’s star is on the rise in the cloud arena, and IBM needs more exposure for its own products alongside the big three cloud providers. It’s a smart partnership for both parties, but one could argue that IBM gains more from the deal than Microsoft.

In a statement announcing the partnership, IBM Senior Vice President Robert LeBlanc stressed the importance of the deal with regards to IBM’s hybrid cloud strategy. “This agreement reinforces IBM’s strategy in providing open cloud technology for the enterprise,” LeBlance said. “Clients will now gain unprecedented access to IBM’s leading middleware and will have an even greater level of choice over the tools that they use to build and deploy their cloud environments.”

Microsoft and IBM have historically had a somewhat frosty relationship, from Microsoft Windows trouncing OS/2 in the battle for OS dominance to legal settlements in favor of IBM in 2005 that stemmed from Microsoft’s antitrust lawsuit. Charles Babcock over at InformationWeek has written an extensive analysis of the IBM / Microsoft partnership news and is well worth a read.