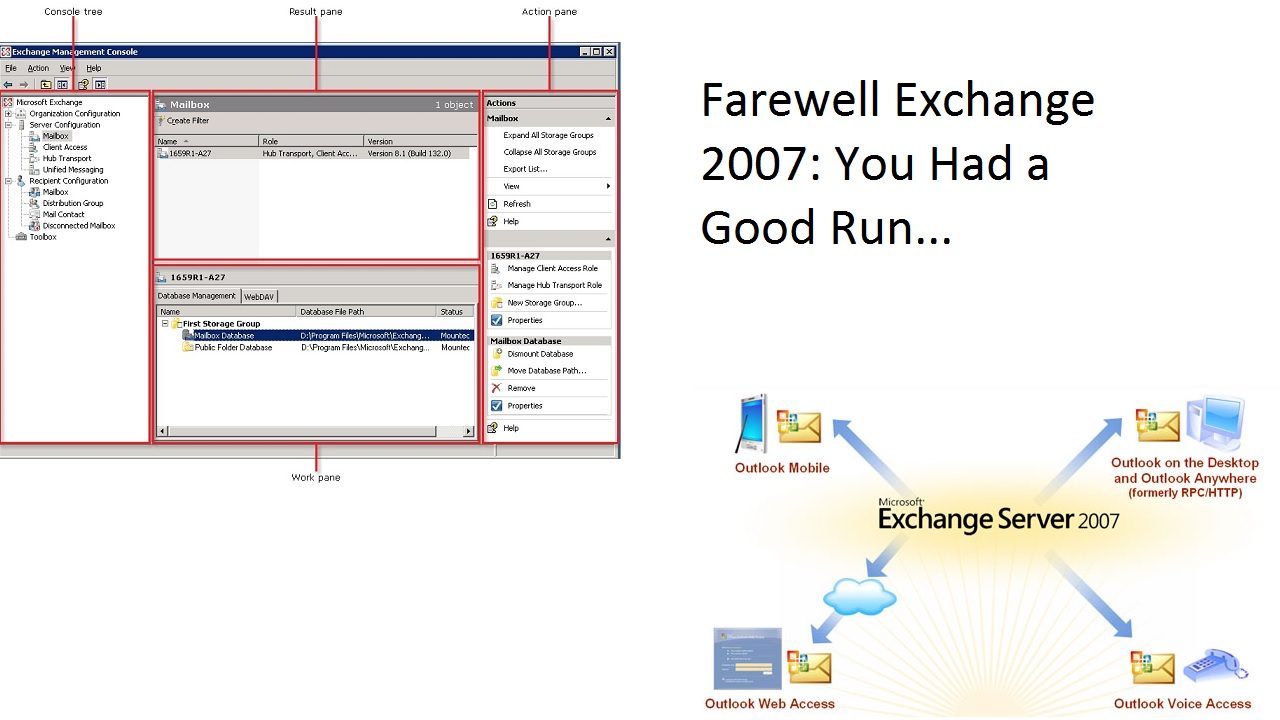 The End of the Line for Exchange 2007

Exchange customers are fond of old software. At least, I assume that this is the case because I meet people who tell me that they still run Exchange 2003 or even Exchange 5.5. Good as those releases were, they do not hold a candle to Exchange 2007, which reaches formal end of life status on April 11, 2017.

End of life does not mean that Exchange 2007, or rather, Exchange 2007 SP3 roll-up update 22, the last version released by Microsoft on December 13, 2016, will stop working. Instead, it means that Microsoft will cease free and paid support, bug fixes, and security updates. In short, you will be on your own.

Some organizations are quite happy to run without support. That is the reason why some persist with really ancient software like Exchange 2003. It is true that Exchange 2007 is now very stable. After three service packs and twenty-two rollup updates, there cannot be very many new bugs to find.

But that is not the point. Old software is fragile software, especially when viewed in the context of security and the kind of threat that exists today. It is entirely possible that a serious weakness exists within Exchange 2007 that hackers have not yet exploited. If an exploit occurs after April 11, you cannot look for help from Microsoft. It is that simple.

The Legacy of Exchange 2007

Microsoft released Exchange 2007 in March 2007 and its legacy is pretty impressive. Looking back, the embrace of PowerShell as the underpinning of administration was its most important advance. Exchange was the first Microsoft product to use PowerShell. The original few hundred cmdlets proved the usefulness and power of scripting and created a huge volume of script, snippets, and code examples shared across the Exchange community.

More importantly, Exchange 2007 made other Microsoft development groups understand the value of incorporating PowerShell into their products. Today, we expect PowerShell to be part of every product, including the entire spectrum of Office 365, and people complain when cmdlets are not available or miss some piece of functionality.

Without the bet made on PowerShell, it is fair to say that Exchange would not have progressed as much as it has since and Microsoft could not have delivered Office 365 in the way that hundreds of millions of people do today. Office 365 depends on an incredible amount of automation to run operations efficiently and PowerShell is a big part of that.

Moreover, Exchange 2007 introduced the basics of log shipping to the product with LCR, CCR, and SCR, all of which kept a second copy of mailbox database synchronized by copying transaction logs. Today, that foundation has evolved into highly efficient Database Availability Groups (DAGs) that support up to sixteen copies of mailbox databases. Exchange Online depends on DAGs to protect user data through Native Data Protection, the reason why Microsoft can run this part of Office 365 without traditional backups.

The Other Office 2007 Applications

Although Exchange 2007 is the first of the Office 2007 applications to reach end of life, other applications are not far afterwards. SharePoint 2007 and Project 2007 get to the same stage on October 10, 2017, while Office Communication Server (the predecessor of Lync and Skype for Business) expires on January 8, 2018. There is much work to be done to revamp your server infrastructure if you use these products.

Exchange 2007 was a good release, but it’s time to let go and move to more modern software. Given their “cloud first” focus, Microsoft’s preference is that you move to Office 365. However, it is possible to move to a more modern version of on-premises Exchange, albeit using a process that requires several steps if you want to get to Exchange 2016.

And of course, it is not just a matter of server software. Lots of work needs to be done to ensure that users are trained and clients are upgraded. That work is necessary whether you stay on-premises or embrace the cloud. Upwards and onwards…