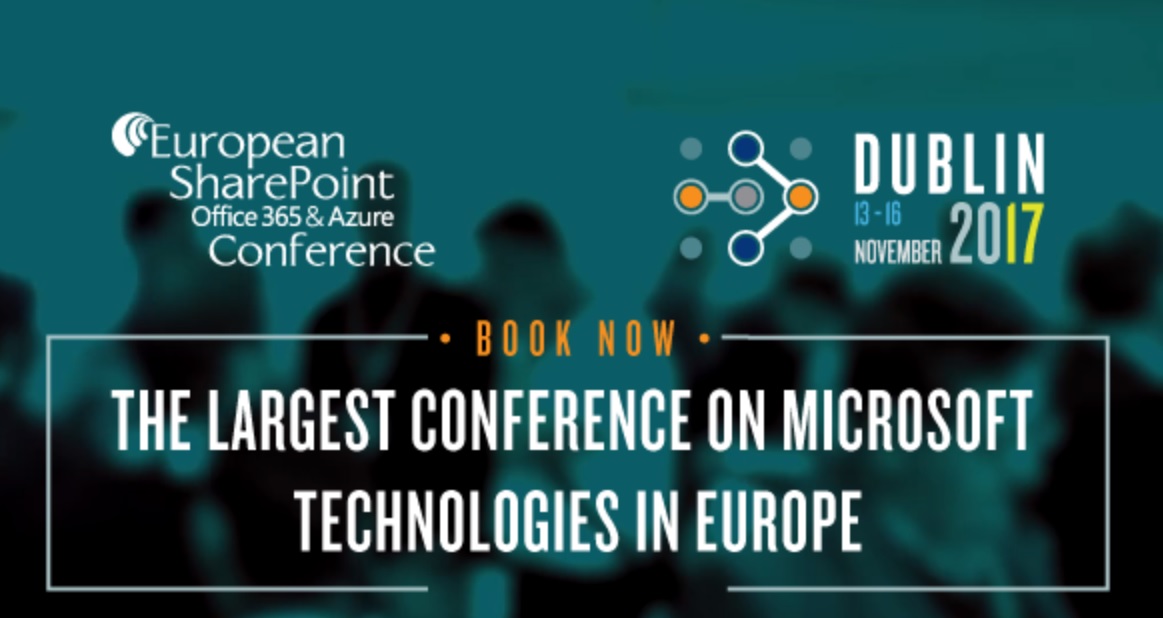 This week, I had the unique experience (for me) of attending a large Microsoft-centric technology conference in my home town. The European SharePoint Conference (ESPC) came to the National Conference Center (Figure 1) in Dublin, Ireland over three days, complete with keynote speakers like Microsoft’s Jeff Teper, backed up by a cast of other well-known MVP, industry, and Microsoft speakers. 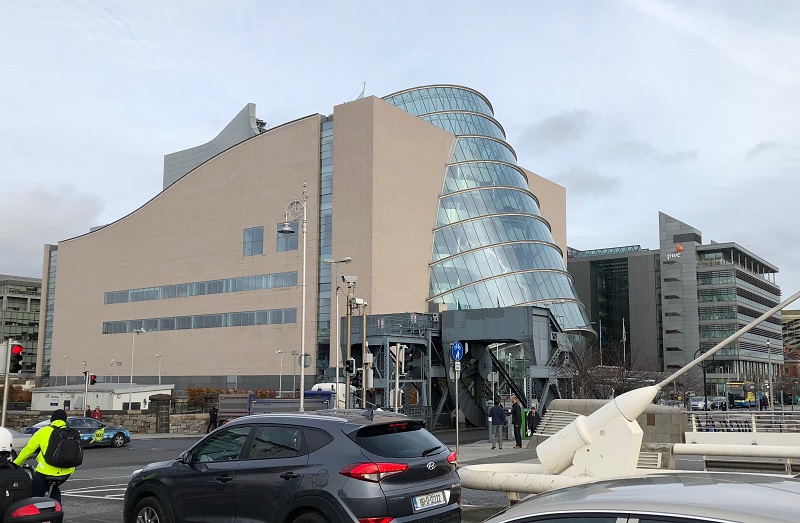 Over sixteen hundred people turned up and the conference organization and delivery were well up to the desired standard, including some rather good Irish dancing (Figure 2 – think “Riverdance lite”) to set the tempo on Tuesday morning. 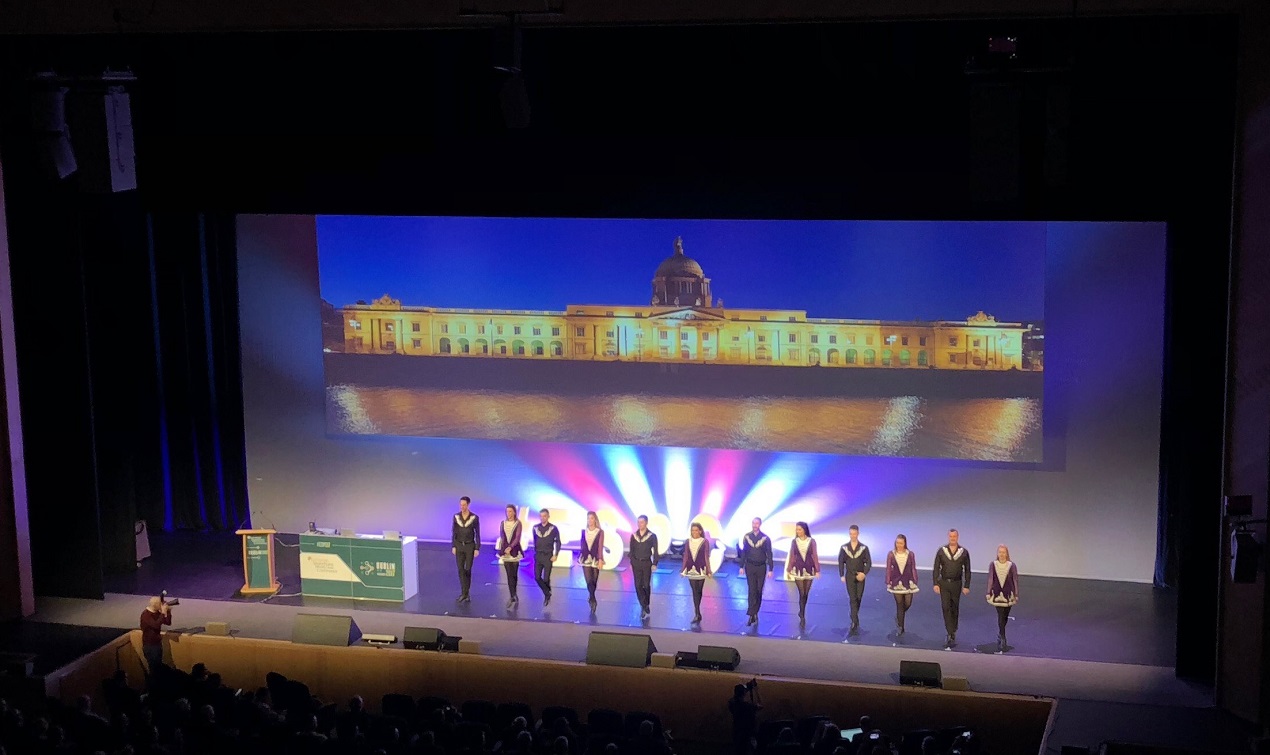 Regional conferences like ESPC give local audiences the chance to hear about product roadmaps and announcements without having to travel to Microsoft events like Ignite or the Tech Summits. Given that Ignite is in the recent past, the content was mildly tweaked over that presented in Orlando in September.

The Problem Posed by Office 365 for Conference Agendas

As you would expect, the ESPC agenda was dominated by SharePoint. Given that ESPC aspires to cover both Office 365 and Azure, I expected more coverage of these topics. I guess it takes time for conferences to evolve, and maybe the 2018 event will. After all, in the intermingled world of Office 365, IT professionals need to acquire knowledge of all parts of the suite because they never know where they’ll need to work with SharePoint, OneDrive, Exchange, Teams, Groups, Delve, Azure Active Directory, Flow, or anything else that turns up in the app launcher. Concentrating on just one technology is a bad plan in the Microsoft Cloud.

As an example of what I mean, take a look at the graphic in Figure 3 (tweeted yesterday as part of the #EPSC17 feed, originally from AvePoint), which tries to position the various collaboration technologies available in Office 365. 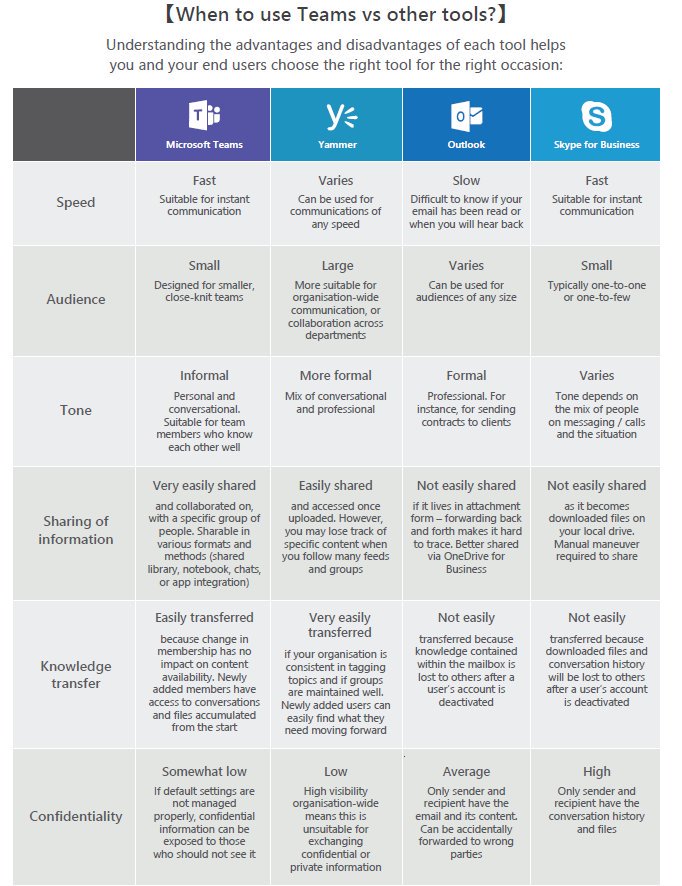 Someone who has intimate knowledge of the complete Microsoft Cloud stack would point out that Teams, Yammer, or Skype for Business might score lower under “confidentiality” because none of these technologies support Azure Information Protection or message encryption. By comparison, Outlook users can restrict access to email using Office 365 Message Encryption or Azure Information Protection templates.

I could quibble with other assertions in the comparison (for example, why aren’t Office 365 Groups covered – or SharePoint team sites). However, my point is that unless a conference encourages the widest possible coverage of a stack, attendees do not get the kind of advice and guidance that they should.

As normal, Jeff Teper delivered a good keynote. I admired the verbal gymnastics he went through to describe Office 365 Groups as an “entry path into group collaboration,” meaning that being a member of a group allows people to access email, Teams, and social (Yammer) as different ways to collaborate.

There’s no doubt that Microsoft is still grappling to explain to customers how Exchange, SharePoint, Teams, and Yammer all co-exist gracefully within the Office 365 collaboration spectrum. I preferred the entry points analogy to the “outer loop/inner loop” concept that was all over Ignite.

Jeff said that it is “just more fun to use five-day old technologies to engage users than five- or ten-year old technologies.” Although it is certainly true that newer technologies are more interesting to IT professionals than the old stuff, some technology needs time to mature – a point emphasized when several keynote demos failed to work quite as smoothly as anticipated. It would be nice if new technology always worked once it appeared inside Office 365, but that is not the case. Take the issues with the beta version of the PowerShell module for Teams as a case in point.

The Success of SharePoint

After a tricky few years, SharePoint is back on a roll. Jeff said that “more organizations have adopted SharePoint in the last 12 months than in the last 12 years.” Perhaps the reason for this is that SharePoint is one of the two basic Office 365. The growth is likely because Office 365 Groups, Teams, Yammer Groups, and OneDrive for Business all use SharePoint for document management.

Jeff also said that: “65% of SharePoint seats are now online.” SharePoint is no longer a standalone application. As the second-largest Office 365 workload (now growing faster than Exchange), the current and future success for SharePoint is tied to the 120 million monthly active users of Office 365 and the applications that Microsoft builds to use SharePoint storage.

What On-Premises Customers Can Expect in 2019

Any conference focused on Microsoft server applications will have some attendees who are committed to on-premises servers. Jeff Teper commented that the 2019 versions of Exchange, SharePoint, and Skype for Business will be a “substantial subset of what’s available in the cloud.” That could be read as positive or negative, depending on what you think a substantial subset means.

The point here is that many of the more exciting features Microsoft brings to the online versions of SharePoint and Exchange need machine learning or the Microsoft Graph. Most on-premises customers do not have the computer resources available to do this kind of processing, which then automatically restricts the features that Microsoft can bring to on-premises servers.

I was amused by several of the terms and topics used by Microsoft speakers during the keynote and other sessions. Here’s what I picked up. 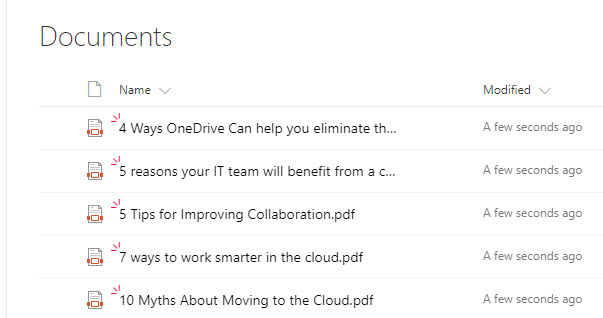 English is an evolving language, especially in the world of IT! However, I am not so sure that the European audience understood the language used by Microsoft.

Benjamin Niaulin is a well-known MVP and conference speaker. I have even had the pleasure of sharing a stage with him at the Ignite 2016 event. Benjamin spoke after Jeff Teper and I later caught up with him at the Sharegate stand in the exhibition hall, where I was amused to find that Sharegate (his employer) have created a Benjamin pin. It is a nice enamel pin, even if the eyes are too wide open for my liking (Figure 5). No doubt all MVPs will want to have enamel pins made now. 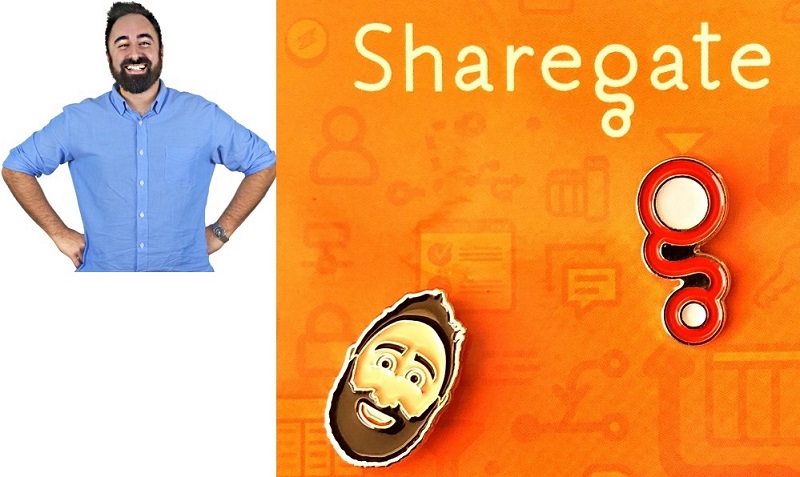 The European SharePoint Conference offered great content that was clearly appreciated by their audience, but I hope that the program committee includes more Office 365 content in their 2018 event (in Copenhagen, November 26-29).

As Benjamin Niaulin noted, it is not enough to simply move workload to the cloud. You need to embrace the cloud in its totality. It is difficult to move on from the well-understood techniques of the past to take on new concepts, but it has to happen.