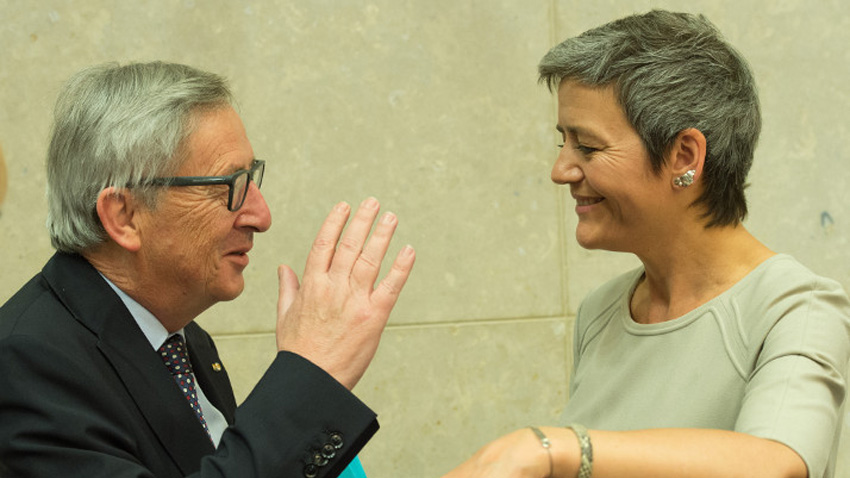 European Union competition commissioner Margrethe Vestager on Wednesday formally accused Google of violating antitrust laws by abusing its dominance in Internet search to harm competitors and consumers. Additionally, Ms. Vestager said that her European Commission was investigating whether Google forces phone makers to favor its own services on the Android mobile OS.

Google controls 90 percent of the Internet search market in the EU.

“The European Commission has sent a Statement of Objections to Google alleging the company has abused its dominant market position for general search services in the European Economic Area (EEA) by systematically favoring its own comparison shopping product in its search results,” an EC statement explains. “The Commission has also formally opened a separate antitrust investigation into Google’s conduct as regards the mobile operating system Android.”

In the EU, a Statement of Objections is a formal charge for a crime. So Google now has 10 weeks to respond to the EU, and it may seek to settle the case. As you may recall, Google had reached a weak preliminary settlement with Ms. Vestager’s predecessor, Joaquin Almunia. But that deal was scuttled after numerous EU politicians and Google competitors complained that the search giant had gotten off too easy. So if Google would still like to settle this case, it will have to agree to far more severe behavioral changes than before.

At stake are potential fines of $6.35 billion—10 percent of Google’s most recent fiscal year revenues—and/or behavioral remedies that would be imposed on the company in all EU companies.

There are two fairly recent examples that should guide the decision making process at Google: Microsoft paid over $2 billion in fines over several years when it decided to fight the EU, and was also held to a bewildering set of behavioral changes that worked to help hobble the software giant over the past decade. Microprocessor giant Intel, meanwhile, decided to settle quickly with the EU when it was charged with antitrust abuses in 2009. Intel was fined a record $1.3 billion.

The EU’s case against Google is clear-cut. Google artificially doctors its search results to favor its own services over those of niche or vertical market competitors. And because it is the gateway to the Internet for most of the EU’s population, it has unique insight into what people are searching for, so it can quickly ramp up its own offerings to compete with EU-based services.

That’s not how Google explains it. In a post to the Official Google Blog, Google’s Amit Singhal argues that people in the EU have more choice than ever before when it comes to search.

“If you look at shopping—an area where we have seen a lot of complaints and where the European Commission [did] focus its Statement of Objections—it’s clear that (a) there’s a ton of competition (including from Amazon and eBay, two of the biggest shopping sites in the world) and (b) Google’s shopping results have not the harmed the competition,” Singhal writes. “We respectfully but strongly disagree with the need to issue a Statement of Objections and look forward to making our case over the weeks ahead.”

But it doesn’t stop with search. In addition to dropping the antitrust bomb on Google’s search business, the EU is also formally launching an investigation into Android after a years-long study of the business. The issue here is that Google forces handset makers to both bundle and highlight Google services over third party services on Android phones.

“I have also launched a formal antitrust investigation of Google’s conduct concerning mobile operating systems, apps and services,” Ms. Vestager said Wednesday. “Smartphones, tablets and similar devices play an increasing role in many people’s daily lives and I want to make sure the markets in this area can flourish without anticompetitive constraints imposed by any company.”

Google argues that Android is “open” and that its partner agreements are voluntary. But it also confirms that it requires handset makers to push Google services in order to benefit consumers, not limit their choices.

“Our app distribution agreements make sure that people get a great ‘out of the box’ experience with useful apps right there on the home screen (how many of us could get through our day without maps or email?),” the firm explains. “This also helps manufacturers of Android devices compete with Apple, Microsoft and other mobile ecosystems that come preloaded with similar baseline apps. And remember that these distribution agreements are not exclusive, and Android manufacturers install their own apps and apps from other companies as well.  And in comparison to Apple—the world’s most profitable (mobile) phone company—there are far fewer Google apps pre-installed on Android phones than Apple apps on iOS devices.”

It looks like Google’s lawyers are going to be quite busy for a while. During this time, perhaps Google could examine delivering truly organic search results and taking its role as the gatekeeper to the Internet a bit more seriously.