Cortana Daily Briefing Not Wanted by Some Office 365 Tenants 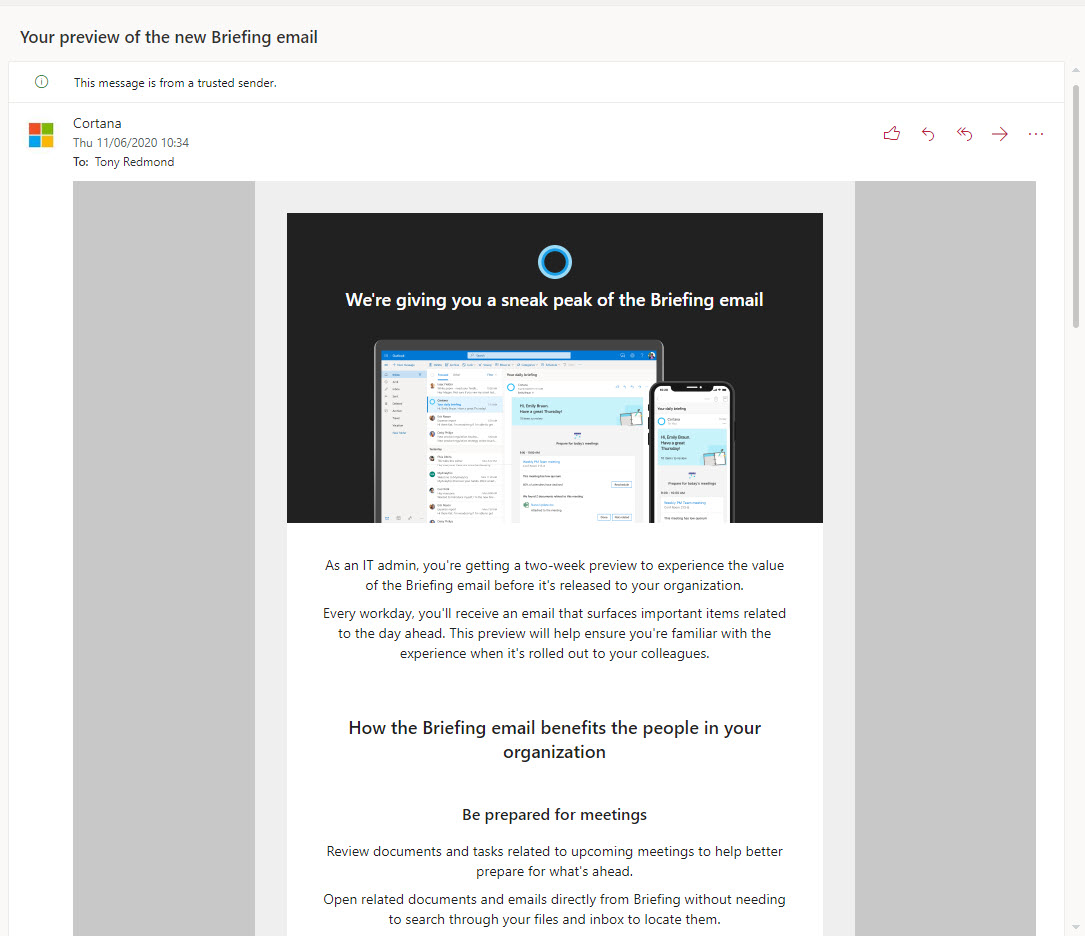 On May 13, Microsoft issued Office 365 notification MC212676 to inform tenants that a new Cortana daily briefing email was coming, saying:

“The Briefing email from Cortana helps users start their day on track by surfacing information on upcoming meetings and outstanding tasks as well as protecting your time for independent work. If there is relevant content, these users will receive the email at the beginning of each workday; at least one task must be detected for there to be a daily mail. This setting is enabled by default.”

Microsoft’s marketing post of May 27 includes details of the daily briefing among other Cortana initiatives, some of which are only available in the U.S. (like Play My Emails). According to that post, “Briefing is currently rolling out in First Release for Microsoft 365 Enterprise users with Exchange Online mailboxes in English.”

Not everyone reads Microsoft marketing posts (or the copies of the content reposted in the technical press), nor is everyone aware of Office 365 notifications (which is why it’s a good idea to synchronize notifications into Planner). Tenant administrators are often so busy that they only respond when directly contacted. Mutterings of discontent duly emerged in some parts of the Office 365 community last week when tenant administrators received a preview of the Cortana daily briefing email (Figure 1). The message gives two weeks’ notice of the arrival of daily briefings into user mailboxes. I got the update for my tenant on Thursday and therefore anticipate that users will start receiving daily briefings at the end of June.

The Purpose of the Cortana Daily Briefing

According to Microsoft, Cortana’s daily briefing will:

Users won’t receive daily briefings unless Cortana can come up with at least one actionable item. I guess this means that people won’t ever be reassured by Cortana that they can take the day off.

Reading the above, it should come as no surprise that the daily briefing comes courtesy of the same group that’s responsible for MyAnalytics, which has been concentrating on using data to drive user insights for the last few years. Many of the same insights will now appear in daily briefings.

Daily Briefing Should Be Opt-In

Some will delight in the new functionality. Others will think it an unwarranted intrusion into user privacy being fostered on Office 365 users by Microsoft.

Update (June 16): Microsoft originally planned to introduce this feature without a tenant-wide turn-off switch. After much feedback, they introduced a new tenant opt-out setting in the Microsoft 365 admin center (Figure 2).

Like MyAnalytics, users can opt-out (by unsubscribing) if they don’t want to receive these messages and administrators can take action to stop users receiving the messages in the first place by running some PowerShell to disable the feature on a per-user basis.

Disabling the daily briefing, at least temporarily, seems like a sensible thing to do because we know from experience with MyAnalytics that many organizations are unprepared for the advent of automated advice. Users are untrained, don’t know what to do with the recommendations, or simply don’t like being told what to do with their working lives. An idea that seems great in the confines of a Redmond conference room can be difficult to transfer to real life.

MyAnalytics used to be only available in Office 365 E5 or as an add-on for Office 365. When that was the case, organizations had the chance to decide whether MyAnalytics should be used and could prepare their users. Microsoft then decided to make MyAnalytics available to all Office 365 enterprise and business customers, which provoked many questions how to stop MyAnalytics messages reaching users.

Microsoft received this feedback – several times, including by me (several times). But they decided to persist and impose their vision of how people should work intelligently on an Office 365 user base that is now so large and diverse that it’s almost impossible to get agreement on how anything should be done, which is why opt-in is better than opt-out.

Once you receive the heads-up that the daily briefing is on its way, you should consider who might like to receive it. And for those that don’t, you can disable the daily briefing by running the PowerShell Set-UserBriefingConfig cmdlet, part of the new Exchange Online management module. One trivia point about Set-UserBriefingConfig: it is the first Exchange REST-based cmdlet to update mailbox settings – all the other REST-based cmdlets fetch information.

Set-UserBriefingConfig works by enabling or disabling the feature for a mailbox. To disable the daily briefing for a specific user, run a command like:

It’s more likely that you’ll need to disable the daily briefing for groups of users. You can form collections of mailboxes to process with cmdlets like Get-ExoMailbox. For example, this code finds all user mailboxes and disables them for the daily briefing, the rough equivalent of disabling the feature for an entire tenant:

Unfortunately, the Set-UserBriefingConfig cmdlet doesn’t accept piped input from Get-ExoMailbox, which is why a loop is needed to process the collected mailboxes. Remember that the daily briefing will need to be disabled after adding new mailboxes. This can’t be done in a mailbox plan.

Sometimes you’ll need to refer to properties that are held in Azure AD rather than Exchange Online, like country or department. For example, here’s how to disable the daily briefing for everyone in a chosen country.

The Get-UserBriefingConfig cmdlet is available to check the daily briefing status of mailboxes:

Time to Break the Bad Habit

Microsoft has a bad habit of deciding how Office 365 tenants should consume data, like creating Microsoft 365 groups for managers and their direct reports, thinking that allowing users to self-purchase PowerAutomate licenses was a good idea, or deciding that small organizations would like an org-wide team.

I’m not against the wider application of artificial intelligence and machine learning to smarten the way we work and it’s great to have practical examples of these technologies. However, Microsoft should respect the right of Office 365 tenants to decide when technology is used instead of being forced on people by assuming everyone will be happy to receive Cortana’s daily briefing.