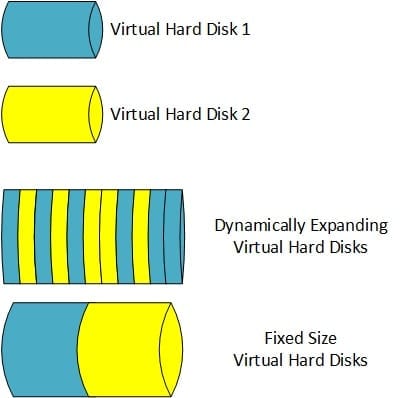 We recently looked at the ways that Hyper-V virtual machines could use physical disks, and we’ve discussed the benefits and flaws of these kinds of storage.  This week we are going to look at the modern, business friendly, cloud-enabled, virtual hard disk alternative.

The principal flaw is derived from the fact that a physical disk, such as a pass-through disk, is not abstracted from the physical LUN that enables it. The pass-through disk requires exclusive use of the LUN. A physical storage LUN cannot be moved using Live Storage Migration or Shared-Nothing Live Migration. We cannot backup a virtual machine from the host using a Hyper-V-ready VSS snapshot; instead, we need to install expensive (both in effort and complexity) backup agents into the guest OS to back up the physical disks.
Granted, these are all technical reasons – which the board of directors and shareholders don’t care about. However, they do care about the following factors:

Whether you like it or not, businesses are moving towards cloud computing, be it public (multi-tenant service provider), private (infrastructure that is exclusive to the business), or hybrid (services deployed to public and private clouds). A key trait of this is self service. For example, a department is deploying a new service to the business and they do this using a console that IT provides. The service is deployed within a matter of minutes without any “delays” being “caused” by the IT (in the perspective of the business). Using physical disks will prevent this. A solution that abstracts storage is required.

A virtual hard disk is a file that simulates a hard disk. From the outside, the file looks like any other file in the file system. When attached to a virtual machine’s virtual storage controllers, the virtual machine will mount the file and use it just like a physical disk: volumes are created, formatted with a file system (such as NTFS), and files/folders are created, managed, and deleted – just as if the disk was physical. From the outside, we see almost nothing of this going on inside of the virtual hard disk. Just like physical disks, a virtual hard disk has a size (or a maximum size) that can be expanded as required.
Virtual hard disks are one of the two data center containers that Microsoft uses. The other is the Windows Imaging (WIM) file format. WIM files are used in operating system imaging. You’ll find an Install.WIM file in every Windows ISO/DVD since the release of Windows Vista and Windows Server 2008. This is the same format that is used by ImageX, Windows Deployment Services, Microsoft Deployment Toolkit, and System Center – Configuration Manager.
Virtual hard disks (often shortened to VHD, which can be confusing, as you’ll soon see) are the other strategic container. Virtual hard disks are used for virtual machines, but they’re also are used for things like booting servers from a file instead of physical volumes (easy to deploy), Windows Server Backup, and the Windows Server iSCSI Target. Virtual hard disks offer benefits such as:

There are three kinds of virtual hard disk in Hyper-V: Dynamically Expanding, Fixed Size, and Differencing. Now let’s take a closer look at each one.

Often referred to as dynamic, this is the default type of file when you create a virtual hard disk. It can be thought as a thinly provisioned virtual hard disk. This file starts out very small with a preset maximum size. The file grows in chunks as data is stored in the file, and it will stop growing when it reaches the maximum size.
The major benefit of this type is that the dynamic disk takes up only slightly more space that the data contained within. Roughly speaking:

What are the downsides of dynamic virtual hard disks? One might think the gradual growth of the files would be an issue. Actually, real-world experience doesn’t show it to be an issue – Microsoft has worked to improve growth performance with this type with the releases of Windows Server 2008 R2 and Windows Server 2012. The real issue is read performance.
Imagine 20 small dynamic virtual hard disks on the same physical volume, each separately gradually growing a block at a time. Those blocks get fragments across the volume. That means that sequential reads suffer because the underlying physical disk spindles spend time bouncing around from block to block within the volume.

The file of a fixed virtual hard disk is created at the maximum size of the volume. Using the same example as before:

There are two formats of virtual hard disk in Windows Server 2012 (Hyper-V) and Windows 8 (Client Hyper-V):

Now you can see where the acronym of VHD for virtual hard disk can become confusing!

The VHD format has been around since before Microsoft entered the virtualisation market. It came with Microsoft’s acquisition of a company called Connectix. VHD was designed to meet the challenges of the computer room over a decade ago. Back then everyone considered a 2040 GB volume (the maximum size of a VHD file) to be huge.
VHD format files were the only option in all previous versions of Microsoft’s virtualization products. However, Microsoft introduced a new format for a new decade with the release of Windows Server 2012 and Windows 8.

VHDX files are the new default format of virtual hard disks. They are not supported on legacy virtualization products, but you can convert a VHD file into a VHDX file and vice versa.
The biggest feature of VHDX files is that they scale out to 64 TB (also the maximum supported size of a VSS snapshot). This counters the reason for using pass-through disks for scalability in almost all scenarios but the most extreme (volumes larger than 64 TB).
Other benefits include:

VHDX is the virtual hard disk format of today and the future, and it should be used for all deployments. There is a divide in the Hyper-V community over the best type of virtual hard disk to use for production servers. Some will only use Dynamically Expanding virtual hard disks. Others prefer Fixed Size virtual hard disks, but will use the dynamic alternative in a lab when disk space is restricted. The choice between the two is part-technical (performance) and part business (cost of storage).